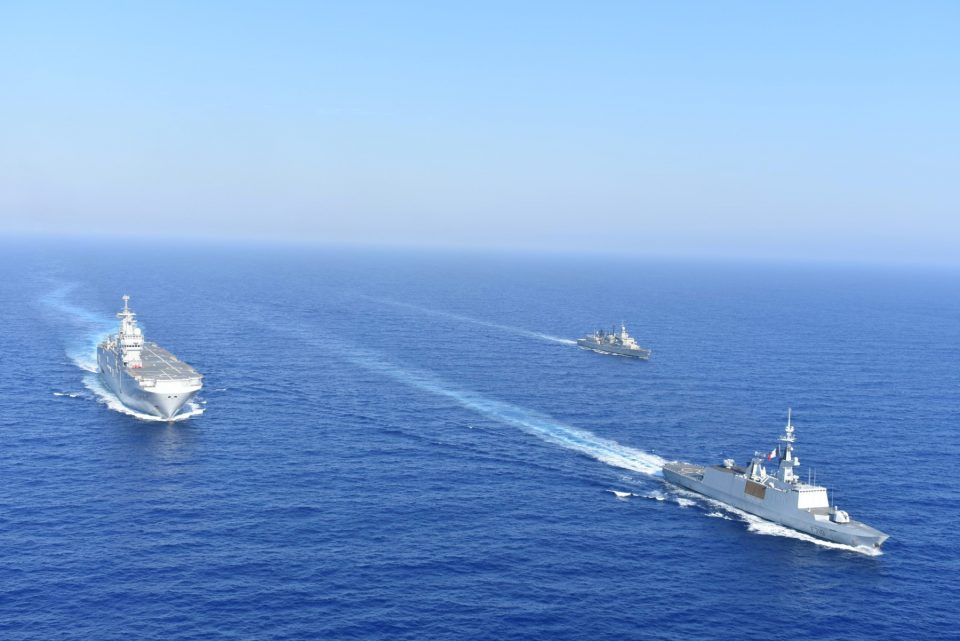 FILE PHOTO: Greek and French vessels sail in formation during a joint military exercise in Mediterranean

As Athens and Ankara continue to trade barbs despite Germany’s efforts to cool tensions, and as France and Italy join Greece and Cyprus for military exercises in the region, a new round of discussions on Turkey-EU relations is set to take place Thursday and Friday in Berlin.

EU-Turkey relations will be among the issues on the table at the informal EU Foreign Ministers meeting (Gymnich), which begins on Thursday. Cyprus will be represented by Foreign Minister Nicos Christodoulides.

Germany has sought to mediate between Ankara and Athens. On Tuesday their respective foreign ministers said they wanted to solve the matter through dialogue following talks with German Foreign Minister Heiko Maas. However, each warned that they would continue to defend their rights in the region.

Turkey said Wednesday it was determined to do whatever was necessary to obtain its rights, President Tayyip Erdogan said. Erdogan also called on Ankara’s counterparts to avoid mistakes that he said would bring their destruction.

“We will not compromise what is ours… We are determined to do whatever is necessary,” Erdogan said. “If there is anyone who wants to pay its price, they are welcome to confront us. If not then they should go away so we can handle our own business.”

Also on Wednesday, Greece said it planned to extend the western limit of its territorial waters in the Ionian Sea to 12 miles, according to Prime Minister Kyriakos Mitsotakis. He said a bill on the matter would be submitted to parliament very soon.

“Greece will extend its western territorial waters to 12 nautical miles from six,” Mitsotakis told lawmakers during a debate on whether to approve a recent accord on maritime boundaries between Greece and Italy.

Meanwhile, France joined military exercises with Italy, Greece and Cyprus in the region on Wednesday amid the worsening dispute.

Armed Forces Minister Florence Parly said on Twitter: “The eastern Mediterranean is turning into an area of tension. Respect for international law must be the rule and not the exception”. She added that it “should not be a playground for the ambitions of some”.

Three Rafale fighter jets and a warship equipped with a helicopter are part of the joint military exercises, she said.

Relations between France and Turkey have soured in recent months over Ankara’s actions in Nato, Libya and the Mediterranean.

President Emmanuel Macron has called for the EU to show solidarity with Greece and Cyprus and pushed for further sanctions at EU level, although there are divisions in the bloc over the issue.

“Our message is simple: priority to dialogue, cooperation and diplomacy so that the eastern Mediterranean becomes an area of stability and respect for international law,” Parly said.

In Washington, US Undersecretary of State for European and Eurasian Affairs Philip Reeker condemned the Turkish policy in the region, saying Ankara’s actions undermine Nato unity and US policy.

He said the US has repeatedly forwarded Washington’s view to Turkey on overflights of Greek territory, its drilling activities in the waters of Cyprus, the signing of the memorandum on the delimitation of the maritime zones with Libya.

“They are provocative and unhelpful actions that increase tensions in the region,” Reeker said.
Expressing the US’s deep concern over the latest developments, Reeker said the main goal of US foreign policy was to de-escalate and ensure that lines of communication remain open to support allied unity within Nato.

Reeker added that the tensions complicate Nato’s efforts to present a common front against the destabilising activities of Russia in the region and involve the risk of an accidental escalation “while acknowledging that there are challenges” that beset US-Turkey relations.

The US official said Turkey remained a key Nato ally and the US would continue to work with it in areas of mutual interest.

“We are confident that [Turkish President Recep Tayyip] Erdogan and his senior officials understand our position,” added Reeker.

Cyprus welcomed the statements later on Wednesday saying it was a “sound message” to Turkey.