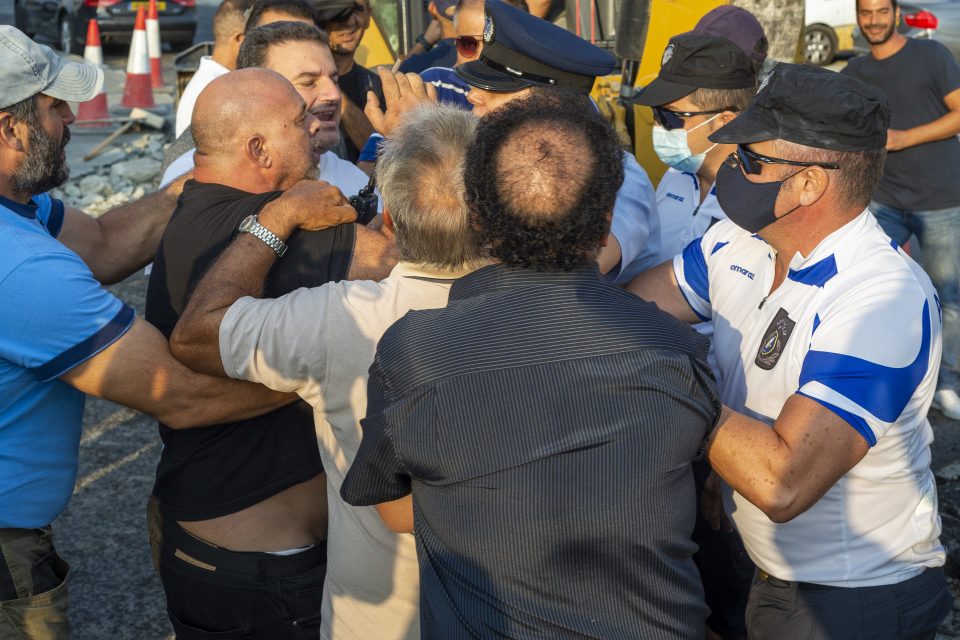 Kattasis and other shop owners were trying to block works to construct a traffic island. They were joined by some politicians, including Edek leader Marinos Sizopoulos.

Despite a strong police presence works had to be temporarily suspended due to the protest at 7am but resumed at 8.45am.

The roads works have long been a bone of contention between the shop owners and the government with the former saying the changes will impact their businesses.

They began on Friday amid threats from business owners that they would block the construction of the traffic island.

Following the scuffles, the transport ministry issued a statement directed at shop owners’ union Povek, saying it does not base its decisions on obsessions but on facts.

“The ministry of transport, communications and works and its officials do not make decisions based on fixations but based on the objective and documented evaluation of the data and technical characteristics of each road separately,” the statement read.

During the consultations, all involved had the opportunity to be heard, and all apart from the shop owners agreed with the construction, the ministry argued.

“Over the last ten years, Cyprus has achieved a significant improvement in the level of road safety on both highways and interurban roads with a reduction in serious injuries and deaths of up to 50 per cent. However, no corresponding reduction has been achieved on urban roads where the reactions of those affected often lead to delays in promoting the necessary projects to improve road safety.”

According to the ministry, Nikos and Despina Pattichis avenue is not only a road used for shopping, but 34,000 vehicles daily pass through, and violations such as illegal turns often lead to road collisions, something that the traffic island will help to prevent.

“It is unfortunate after repeated meetings, on-site visits and a public consultation lasting more than four hours in the presence of the transport minister, MPs, mayors, shopkeepers, organised groups and interested residents that the shopkeepers have failed to prove the correctness of their positions, which they continue to stubbornly support, seeking to perpetuate the unacceptable current situation that prevails on this road.”

The ministry also reminded the shop owners that there is a solid white line down the middle of the road already and this means the traffic island does not change the legal framework, but merely reinforces it, preventing illegalities.

The transport ministry’s public works department said the works would run from August 28 until September 9, and would include maintenance works, the traffic island, the reconstruction of pavements, and the creation of parking on side streets.

On the weekend, August 28-31, from 6am to 6pm a part of the left traffic lane will close on both sides of the road for approximately 100m, and traffic will be guided to the right lane.

Starting Monday, and until Wednesday, September 9, from 9pm until 6.30am the entirety of the road will be closed, and traffic will be redirected to Spyros Kyprianou Avenue, Vasileos Konstantinou Street, Theofdorou Potamianou Street, and the bypass road.

On the weekend September 5-6, from 7am to 6.30pm works will be taking place on side streets, to create a parking area for 25 vehicles.

Shop owners have been protesting and complaining over the traffic island over the past few months, and they have met with Transport Minister Yiannis Karousos to present alternate proposals.

But Karousos announced last week after a cabinet meeting that the works would go ahead as planned, including the traffic island, saying it would increase road safety.

UK transport minister: “It is now safe to return to work”

Woman addicted to exercise works out 8 hours a day