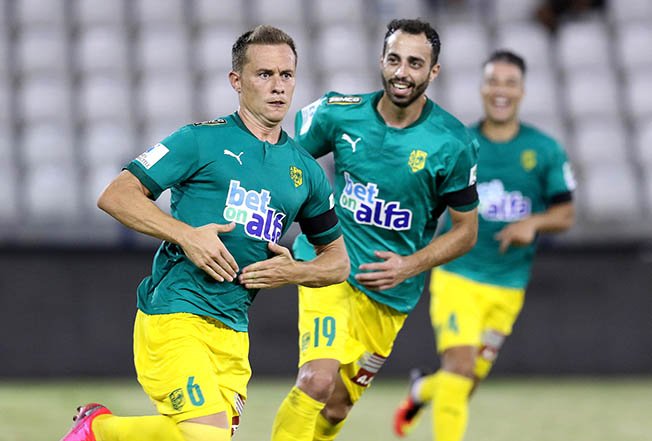 AEK has recently been a bogey team for Apoel. In their last five meetings in Larnaca, AEK have won three and drawn two while you have to go back exactly six years (31/08/14) to find Apoel’s last win

The clash at the Arena Stadium in Larnaca between AEK and Apoel is the standout fixture in the second round of the Cyprus football championship this weekend, while in the other Sunday games title favourites Omonia are at home to Karmiotissa while Ermis Aradippou entertain Apollon.

Twenty four hours earlier, four teams that may be battling to avoid relegation come next May face each other. Doxa Katokopias are at home to Ethnikos Achnas while Enosis Neon Paralimniou will face Olympiakos.

AEK got off to a winning start last week with their perennial top scorer Ivan Trickovski getting off the mark and the striker from Skopje will be keen to add to his tally against his former club.

The Larnaca team has recently been a bogey team for Apoel. In their last five meetings in Larnaca, AEK have won three and drawn two while you have to go back exactly six years (31/08/14) to find Apoel’s last win.

AEK coach David Caneda was quick to dismiss that his side has an advantage over Apoel due to the Nicosia side being taken to extra time in the Europa League on Thursday night.

“It’s hard to destroy the other team’s game plan, in any case we are not playing against angels,” he said during the pre-game press conference.
“I am delighted and comfortable we shall be playing at home where my players are more familiar with surroundings,” he concluded.

There are no major injury concerns for AEK apart from Naoum and Antoniades who would probably not even have started the game while Caneda confirmed that recent signings Nando and Hately were ready for the game.

After Apoel’s European game against Gjilani their coach Marinos Ouzounides asked for patience from the demanding Apoel fans and said that he is building a new team and reiterated his belief in his players saying “we have a lot of new players, good players, we need to work and we can only improve,” he said.

The Europa League game came after another poor display by Apoel in their opening home game of the season where they could only draw with Karmiotissa who had just been promoted to the first division this season.

It is difficult to expect a remarkable improvement by Apoel but at the very least they should be able to show some improvement despite their mid-week adventure.

Another of the top teams that faltered on the opening day were Omonia (drew with Pafos FC) but they were impressive when they knocked out Polish champions Legia Warsaw in Champions League qualifying on Wednesday.

The Greens face Karmiotissa at the GSP and as in the game against Pafos, their wily coach Henning Berg is expected to rest a number of key players giving a chance to younger local boys like Loizou and Tzionis to shine.

Karmiotissa will be no pushover as they are a well-organised team that breaks out of defence with speed while their backline is well disciplined under former footballer Chrysis Michael.

The third of the top teams that dropped points on the opening day, Apollon, have a tricky match against Ermis Aradippou.
However Sofronis Avgousti’s side should prove too strong for the Aradippou team who were torn apart by Anorthosis last week.

Doxa Katokopias and Ethnikos Achnas will clash at the Makarion stadium, with both sides beginning their season with good results. Doxa pinched a point away to Apollon while Ethnikos defeated Enosis.

In the final weekend game Enosis and Olympiakos will battle for their first points of the season.

Mass evictions in Paphos could lead to upsurge in homelessness, NGO says