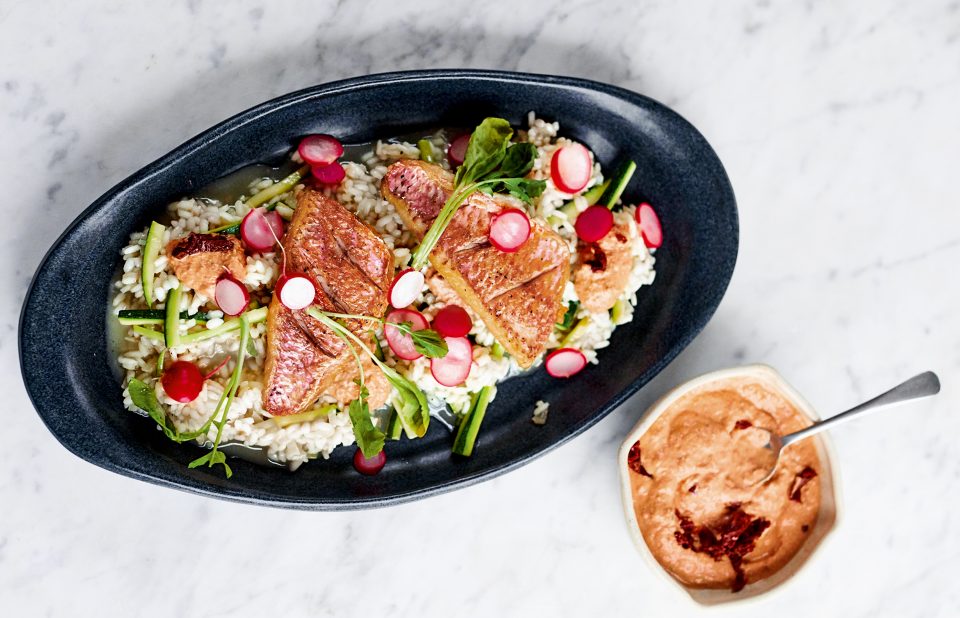 “It bugs me in a way that after all these years, people are still only familiar with feta and halloumi!” comments Irini Tzortzoglou on the Greek diet. Manouri, for example, has a “wonderful texture, very creamy and not as salty. The moment you take it anywhere near a fire or olive oil it comes into its own,” she adds.

Tzortzoglou was the winner of the first all-female final of BBC’s MasterChef when she lifted the trophy last year. The 60-year-old, who hails from a tiny village in Crete, impressed judges John Torode and Gregg Wallace with her sophisticated, modern take on traditional Greek fare, and she still can’t quite believe it now.

“I feel like a star!” she says, laughing, when we talk over the phone. “I was saying, ‘I’m just happy to be going through, I don’t know what’s wrong with the judges!’”

Tzortzoglou’s endearing warmth and cheerfulness won many hearts during her stint on the show, which has led to a new later-in-life career in food – a passion deep-rooted from a childhood growing up on her family’s farm and in the kitchens of her grandparents in the village of Ano Akria.

Her parents and both sets of grandparents’ deeply-rooted influence is celebrated in Tzortzoglou’s first cookbook, Under The Olive Tree: Recipes From My Greek Kitchen – which includes her Yiayia’s pancakes with cheese, honey and cinnamon, ‘garides saganaki’ – king prawns, peppers, ouzo and feta, and ‘fasolakia ladera’ – runner bean and tomato casserole.

“At the Greek table, food was therapy, whether it was preparing for the other women of the family, and you talked and you cried and you showed your anger with your husband or your mother-in-law – it was the table where you resolved little things.”

And there’s a freedom about Greek food – so don’t be a slave to the recipe, she says. “You’re creating something to feed your family, to entertain your friends, to be hospitable, so be relaxed about it. Cook with love and people will love it.”

For the red mullet:

A squeeze of lemon juice

For the sun-dried tomato cream:

A pinch of dried rosemary

For the pickled radishes:

Heat the stock in a saucepan, then keep it on a low to medium heat during the rest of the cooking process. Bring a small frying pan to a medium heat. Add the pine nuts and shake the pan while they turn a golden colour.

To make the sun-dried tomato cream, place all the ingredients in a small blender with half the cooled pine nuts and blitz to a smooth cream. Taste and adjust the flavour with sea salt and freshly ground black pepper, or a drop of lemon juice.

To pickle the radishes, put the vinegar, water and sugar into a small saucepan. Bring to the boil, then remove from the heat. Add the sliced radishes and leave to cool.

To make the risotto, bring a sauté pan to a medium heat. Add the olive oil and shallot and cook for a couple of minutes. Add the garlic and the rice and toss to coat them in the oil. Cook for two to three more minutes, then add the wine and cook until it has evaporated.

Start adding the stock a ladle at a time, stirring constantly and not adding more until the previous ladle has been absorbed. Towards the end of the cooking time (about 20 minutes), add the courgettes. When the risotto is fully cooked, stir in the rest of pine nuts.

To fry the red mullet, wash the fillets and pat dry. Put a large non-stick frying pan over a medium heat and add the olive oil. Lay the fish in the frying pan skin-side down and press down gently, using a spatula. Two or three minutes should be enough.

When the fish is cooked, transfer it to a plate and season with a little lemon juice and flaky sea salt. To serve, spoon some risotto into the middle of each plate, place two red mullet fillets on top, followed by a few pickled radishes, and drizzle the sun-dried tomato cream all around the plate.

A pinch of caster sugar

Mix the yeast and sugar with the warm water. Cover and put in a warm place for about 15 minutes, or until you see bubbles on the surface.

Place the flour, olive oil and a pinch of salt in the bowl and add the yeast liquid. Knead the dough on a floured surface for about 20 minutes, until it is shiny and elastic.

Place the dough in a clean bowl with a little oil, cover the bowl with cling film, then a dry tea towel, and leave in a warm place for about one hour, until it has risen to double its original size.

Knead gently again, then shape into a flat piece about 2cm deep and place it on a baking tray lined with baking parchment or a silicone baking mat.

Gently push the olives and rosemary tips into the dough, sprinkle with a little fleur de sel and extra virgin olive oil, cover with a slightly dampened tea towel, and leave for 30–60 minutes for it to rise some more.

Preheat the oven to 200C. Bake bread for about 30–40 minutes. Remove when it is golden in colour and hollow when you tap it underneath.

Under The Olive Tree: Recipes From My Greek Kitchen by Irini Tzortzoglou is available now