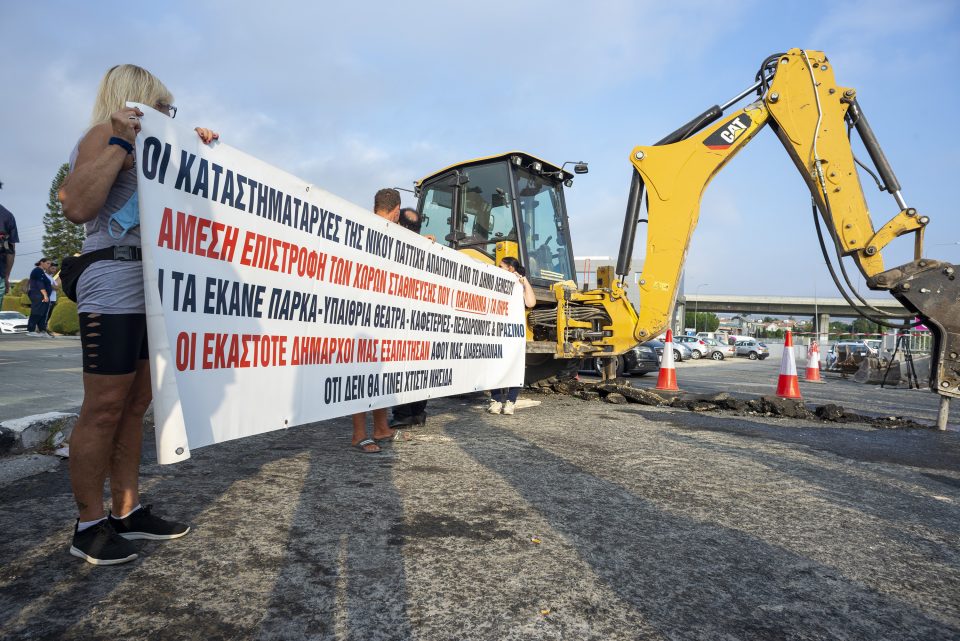 It may have taken a while for the government to find the resolve to go ahead with the building of a traffic island on Despina and Nicos Pattichis Street in Limassol, but it did not budge on Friday when work began. Shopkeepers tried to stop the workmen doing their job, and there were at least three deputies from three different opposition parties on the street to show their solidarity with the protestors.

There was, however, a heavy police presence to offer protection to the workmen and keep the protestors at bay once work began. There were some scuffles and the leader of the shopkeepers was arrested, but the work that would be completed by September 9 got under way. The public works department issued an announcement about how the works would affect cars using the road, but it may be premature to say that the dispute is over.

Protesting shopkeepers had threatened to destroy the traffic island if the transport ministry went ahead with it, so 24-hour presence of police might be necessary to ensure against acts of sabotage. It is astonishing that people have no compunction about announcing they plan to break the law, but in Cyprus there is such a tendency of politicians pandering to protestors they seem to think they can get away with anything.

The presence of deputies at the side of the shopkeepers on Friday morning was an illustration of this. Deputies criticised the government for ignoring the advice of a House committee for consultations with shopkeepers, a claim that was misleading, considering there had been a meeting in which no agreement could be reached. How could there be agreement when the two sides’ respective positions were mutually exclusive? Should there have been consultations for a few years to satisfy the deputies?

When it is an issue of road safety and protecting drivers and pedestrians there can be no negotiation. Shopkeepers were, in effect arguing that no measures should be taken to prevent rampant violations of traffic laws by drivers, because this would affect their businesses. And there were deputies who thought that through consultations a compromise solution could be found. We will just mention the lone protestor supporting the traffic island – his son was killed on that road last year by a driver making an illegal right turn.

In an announcement yesterday, the transport ministry said that in the last 10 years there had been a significant in levels of road safety on highways and interurban roads with a reduction of death up to 50 per cent. It added: “No corresponding reduction has been achieved on urban roads where the reactions of those affected often leads to delays in promoting the necessary projects to improve road safety.” Hopefully, the government’s new-found resolve will lead to a speeding up of safety works on urban roads.

Mass evictions in Paphos could lead to upsurge in homelessness, NGO says