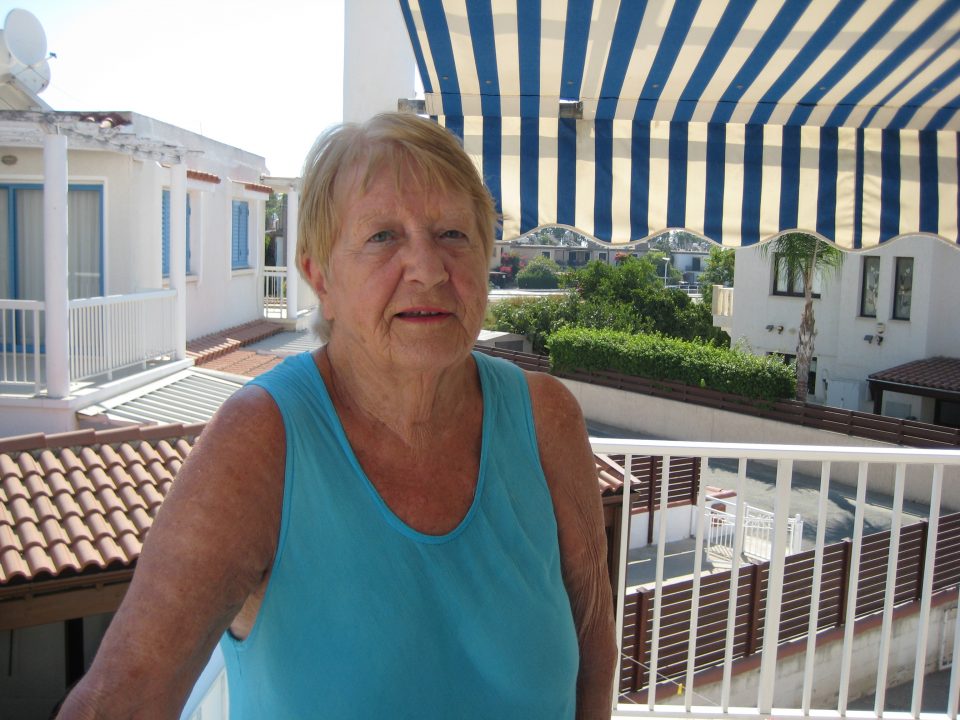 A Year Ago, Margaret Georgiadou Was Being Interviewed By The Bbc In This Very Flat Over The Death Threats She Received In The Wake Of The Anti Brexit Petition She Had Launched

Last year passionate Remainer Margaret Georgiadou was on the receiving end of death threats from Brexiteers, but she was infuriated by her depiction as a helpless granny

There’s a slight disconnect between a tiny flat on the Larnaca-Dhekelia road (with a view of the sea, but still) and the biggest petition in the history of British politics, but Margaret Georgiadou bridges the gap.

A year ago, she was being interviewed by the BBC in this very flat. A few months before that, helped by her teenage grandson, she was on the UK parliament petitions website launching what became known as the ‘Cancel Brexit’ petition, calling on the government to “revoke Article 50” and keep Britain in the EU.

She created the petition in February, then came to Cyprus – as she and her husband do every year – in late March. At that point, the petition had around 10,000 signatures and Georgiadou’s own Twitter feed (@madgie1941) was followed by a handful of people. In a matter of days, however, everything changed.

A support group got hold of the petition, and threw its weight behind promoting it. Around the same time, a million people were protesting in London calling for a ‘People’s Vote’ on Brexit. By the end of March, Georgiadou’s petition – having “hit the pulse at the right time”, as she puts it – had amassed six million signatures (it eventually topped out at 6.1 million), more than any other in British history. A cousin in Melbourne urged her to check out her Twitter – where she discovered, to her shock, that her followers had shot up to 14,500, all of them bursting with support and admiration.

Celebrities like Hugh Grant and Gary Lineker signed the petition. Others were less enthused, hurling the hateful abuse that’s become standard on social media. “Somebody found me on Messenger, and he said: ‘I hope you die an excruciatingly slow and painful death from cancer’,” she recalls. “That turned my stomach… I kept repeating it in my head, it took me ages to kill it.” One night, after her husband had gone to bed, the phone rang and a stranger threatened her physically: “There’ll be a knock on the door,” he warned, “and we’ll get you.”

Georgiadou was shaken – but this is where her story veers a bit off-script, because she hates playing the martyr and in fact was quite “cross with myself” for being shaken. “It was just a voice on the phone,” she told herself. “I mean, use your brain Margaret, they don’t know you’re in Cyprus.” (The call had come on her UK mobile.) “You’ve got to strengthen yourself against it,” she says firmly, chiding herself, “and I didn’t. I didn’t. I was weak. That’s where we all crumble, and we mustn’t!”

That was actually her problem, later on, with that BBC interview, namely that the journalist talked to her for hours but was only interested in extracting every gory detail about the threats. “I was a little granny,” she scoffs contemptuously, “who, you know, poor little thing, had been terrified by these death threats… He never let me make one single political statement.”

How political is she, anyway? That’s the question that hangs in the air, now that 78-year-old Margaret Georgiadou has officially become GangstaGran – named for a character in a David Walliams book, throwing the Beeb’s fragile-old-lady stereotype back in its face – a notable Twitter presence with 17,800 followers. Has the whole thing become an obsession, post-petition? “Let’s put it this way: I’ve thought a lot more, a lot harder, about many things. Like corruption. Like corrupt governments, how do you get rid of them?… They’ve been planning this takeover of democracy for a long time,” she adds, ‘they’ being a combination of Thatcherites, neo-liberals and the super-rich, not to mention Russia whose malign influence on British politics she decries more than once.

Wasn’t Brexit a case of democracy in action, though?

“Not really… We still haven’t had a proper investigation into the manipulation of voting in the referendum,” she replies, citing data harvesting and targeted adverts on Facebook. In any case, “what we’ve got at the moment has become completely evil. This government is evil. They’re using Brexit for their own agenda.”

That makes her sound like an activist; but in fact Georgiadou is more complex than that – and, some might say, more interesting. Huddersfield-born, she spent her career as an English teacher – including, for many years, in Cyprus, mostly at the English School in Nicosia – socialist by nature but not really caring overmuch for politics. (She did join the Communist Party at university, but “got sick of them telling everybody what to do”.) She paints, writes poetry – but is happy for it to remain unpublished – and plays the piano. She also plays Basil the baglamas, a baglamas being a kind of bouzouki and ‘Basil’ being the pet name she’s bestowed on her own baglamas (it used to be Boris, which got changed for obvious reasons). Her conversation is wide-ranging, going from Brexit to quarks and cosmology – “If the universe is expanding, what’s it expanding into?” – to the WH Auden poem ‘Musée des Beaux Arts’, plus a mention of insects being used as a biological method to extract copper ore. She’s an expansive, humorous, endlessly curious person. “Maybe I’m stuck at the four-year-old’s stage of asking ‘Why?’.”

Her inquisitive nature is childlike, as indeed is her directness (or perhaps that’s the Yorkshire coming through). Her whole project is founded on the staunch belief that the majority of British people are now pro-Remain, if indeed they were ever pro-Brexit – which was why she started the petition, because “I thought people were stupid not asking for what they wanted”. Whether this plain-spoken credo is entirely accurate is another matter. At the very least, Boris Johnson’s electoral triumph suggests that a majority for Leave may still exist – though whether it’s for Brexit or just ‘getting Brexit done’ is a moot point.

Almost 18 months after making history – and four months before the UK does finally drop out of Europe – Margaret Georgiadou has changed, but not dramatically. Her petition didn’t ultimately lead to any concrete change, just a rather farcical ‘debate’ in Parliament – the Tory MPs walked out, she recalls bitterly, leaving the Remainers “talking among themselves” – and her life too remains broadly similar. For a while she was in the spotlight, a target of hate and veneration (the 17,800 on Twitter still speak of “granny magic”) – but she also knows, at the end of the day, that the gap between the tiny flat in Larnaca and the epic petition is smaller than it looks. “It was just a fluke,” she shrugs. “It’s just serendipity.” The right woman, at the right moment.