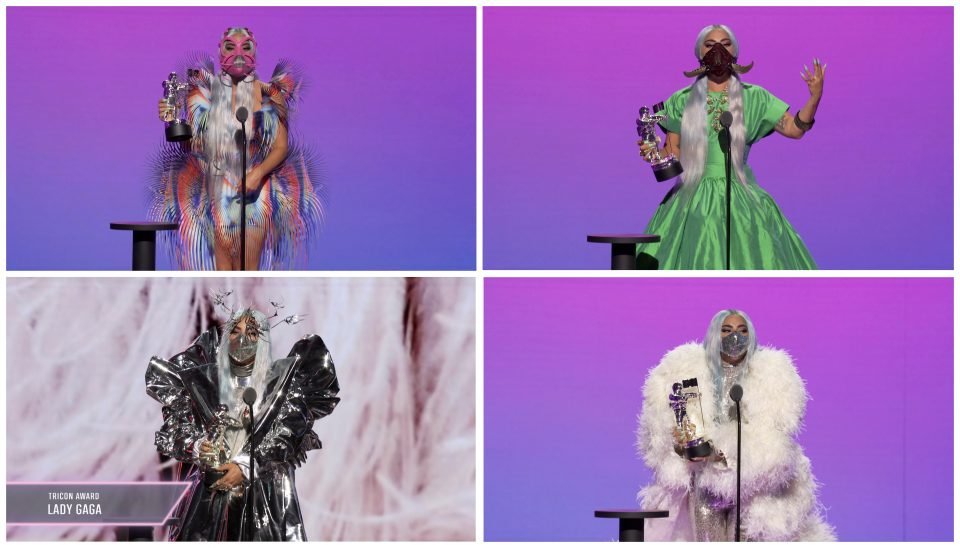 Lady Gaga accepts the awards for Best Collaboration for "Rain On Me", Artist of the Year, Song of the Year, and the Tricon Award during the 2020 MTV VMAs

Lady Gaga dominated the MTV Video Music Awards show on Sunday, with a series of visually arresting outfits, masked performances and four wins, including artist of the year.

Gaga, who went into the show sharing a leading nine nominations with Ariana Grande, stormed the ceremony with multiple costume changes ranging from an exotic bird to a bright green ball gown – all accompanied by exaggerated custom-made face masks and muzzles.

Canadian artist The Weeknd won the top prize, taking video of the year for “Blinding Lights.” He also took the award for best R&B video for the same song.

The VMAs marked the first major U.S. awards show to take place during the coronavirus pandemic. It was filmed without a live audience and with most of the performances recorded in advance because of health guidelines.

Host Keke Palmer opened the ceremony by dedicating it to “Black Panther” actor Chadwick Boseman, who died on Friday at the age of 43.

In the fan-voted show, Gaga and Grande also won two awards for their collaboration “Rain On Me,” while Gaga was given a new lifetime achievement trophy, called the Tricon Award.

“This has not been an easy year for a lot of people,” Gaga said. “Stay safe, speak your minds, and I might sound like a broken record but wear a mask.”

America’s national reckoning over systemic racism was also on the minds of performers and presenters after months of street protests over the deaths of Black people at the hands of police.

“It’s our time to be the change we want to see,” said Palmer. “We need to come together, and music has that power.”

The Weeknd opened the show with a performance on a 1,000 feet high (300 meter) deck overlooking Manhattan, but said he was not in the mood for partying.

“It’s really hard for me to celebrate right now and enjoy this moment, so I’m just going to say justice for Jacob Blake and justice for Breonna Taylor,” he said, referring to the recent police shootings of Blake and Taylor.

The VMAs also recognized essential workers at the frontlines of the outbreak, and handed out trophies to Grande, Justin Bieber and Latin American boy band CNCO for music recorded during coronavirus lockdowns.

K-Pop sensation BTS made their debut performance at the VMAs, singing their new single “Dynamite,” and the seven member boy band won all four of the awards they were nominated for – best group, pop group, K-pop artist and choreography.

VIDEO OF THE YEAR
The Weeknd – “Blinding Lights”

ARTIST OF THE YEAR
Lady Gaga

BEST COLLABORATION
Lady Gaga with Ariana Grande – “Rain On Me”

Black Swan and a loosening grip on reality