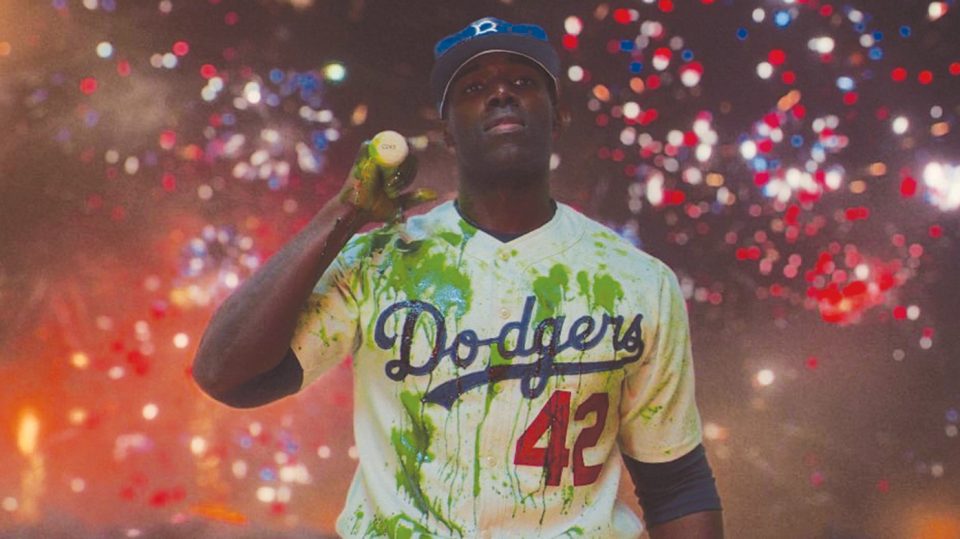 Flames flare across the sky. Bullets fly through the air. A group of soldiers move along the tight confines of a trench, helmets dulled from the dust and gunpowder, weapons at hand, while enemy soldiers receive the wrong end of a bayonet. Above the group, planes dive in, dropping their lethal cargo on the men below. An explosion injects the first bit of colour into this black and white world.

The character we’re following climbs out of the trench and towards the battlefield. He has officially stepped outside of the black and white section of the screen and towards the amplified vibrancy of a bloody battlefield. The darker hues have a cerulean undertone to them, while the flames and fires glow particularly bright wherever they are on the screen, foreground, midground, background.

The camera’s point of view is increasingly elevated. We see three flying saucers in the distance, a flying squid-like monster zooming in from the opposite angle, and tripod war machines from the War of the Worlds wreaking havoc on our left. Planes are zapped down from the sky, soldiers crushed below.

A woman descends from one of the flying saucers, hiding behind our terrified and immensely confused protagonist, as the squid-like monster, a nod to Cthulhu, approaches. We hear a narrator speaking. “This is the story of a boy and his dream,” he says, referring to Jackie Robinson, who we see arriving to save the day. Robinson literally splits the faux-Cthulhu with his bat. The monster puts itself back together and tries to attack again. Robinson once again steps up to bat. Before contact is made our protagonist wakes up from his perplexing dream.

These are the first two and half minutes of HBO’s new series Lovecraft Country. Though there are only two episodes out at the time of writing (remember when shows weren’t dumped whole on your proverbial doorstep?), the themes are clear to see. Reality clashing with fiction, each one trying to outdo one another in how violent, senseless and frightening they can be. A search for heroes and iconic figures that the downtrodden and mistreated look up to in hopes that their larger-than-life presence can shine brightly enough to lift them up and help them escape the direst of straits.

Lovecraft Country is based on the eponymous book by Matt Ruff, a novel investigating the links between the stories of famed horror fiction writer and white supremacist HP Lovecraft and racism in the United States. Though the novel itself is broken down in eight sections, with Lovecraft Country being the first one, the series has taken the first section’s name as its primary title. The series stars Jurnee Smollett (Birds of Prey), Jonathan Majors (Da 5 Bloods), and Courtney B Vance (The Hunt for the Red October, Project Power).

The show has fantastical elements, revealed to us by the end of episode one. It would not have been Lovecraftian if it didn’t. However, the truly suspenseful moments stem from the menace and vice in perfectly commonplace, run-of-the-mill humans. A simple desire to patronise a diner builds up to the horror of imminent threat, culminating in a near-death experience. A drive through the woods and a confrontation with a racist sheriff is as anxiety-inducing as any potential encounter with any eldritch entity.

Roughly halfway through the first episode as our protagonists continue their journey towards their final destination, we hear the words of James Baldwin. “The other, deeper, element of a certain awkwardness I feel has to do with one’s point of view. I have to put it that way – one’s sense, one’s system of reality.” Baldwin’s speech on American racism contains this particular sentence, applicable in both its original context as well as the one the series tries to explore. The real with the fantastical, equally grotesque in their own ways. We then become introduced to the notion of Sundown Towns and their violently enforced segregation. The setting of the sun marks the time for more than one kind of monster to come out.

EU calls for dialogue with Turkey, end to tensions in east Mediterranean