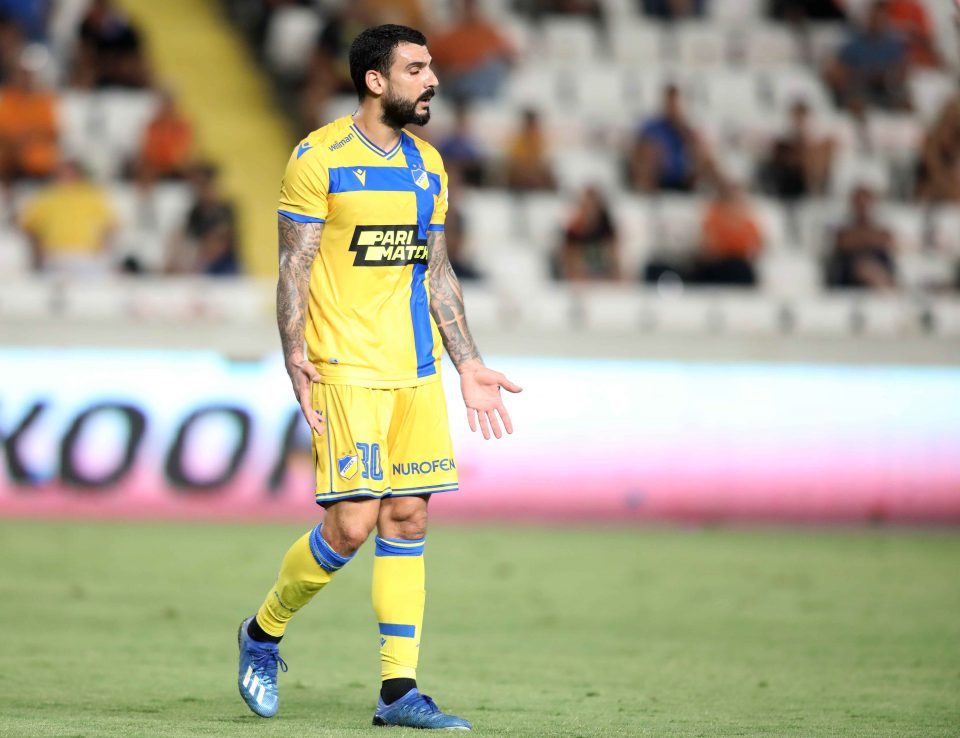 Veteran Apoel defender Giorgos Merkis during the game against Karmiotissa

Seven football championships, 115 signings, and 14 coaches later the Apoel hierarchy is now facing the biggest crisis of their seven-year-reign with many fans screaming for their immediate resignation on social media platforms.

The straw that broke the camel’s back was Apoel’s 3-0 drubbing by AEK last Sunday that came off the back of two more unconvincing displays. The first one was a home draw with Karmiotissa on the opening day of the new season and the second an even worse performance against unknown Gjilani in a Europa League qualiifier. Even though the Nicosia team got past Gjilani, they needed extra-time against a team that would have struggled to command a top half finish in the second division in Cyprus.

However, one could remark how can anyone complain about a board that has delivered seven championships in as many years, as well as a number of qualifications to the group and the knockout stages of the major European competitions.

The moans and groans of the Apoel fans began at least three years ago, when they saw their team’s football gradually deteriorate, relying more on the individual brilliance of a few players rather than on the team as a whole.

They also witnessed a bizarre number of transfers, sometimes players leaving without even kicking a ball, others never justifying their huge salaries and being shown the door with the club having to pay considerable amounts to relieve them of their contracts.

Coaches suffered a similar fate. Winning the championship was no guarantee for a coach to retain his post as Thomas Christiansen discovered in the 2016/17 season. Others, like Temur Ketsbaya, were sacked just a couple of games before Apoel were crowned champions. Domingos Paciência did not even last after the first month of the 2015/16 season.

Last season Apoel must have broken a European record, as the name of their coach changed five times. It began with the Italian Paolo Tramezzani, who was dismissed after losing at home to Qarabag. He was replaced by the German Thomas Doll who lasted five months. Loucas Hadjiloukas took over but his reign was short-lived as well and Norwegian Kåre Ingebrigtsen was handed the hot seat. Eleven games were enough for the board to decide that he was not the man for the job and in February Greek Marinos Ouzounides was given the reins for his second stint as coach of Apoel, the first one being back in 2006.

Despite having many months to prepare for the new season due to Covid-19, the Nicosia giants seem to have started the year totally unprepared.

Having got rid of last year’s strikers, they only managed to sign Israeli Ben Sahar last month and, in the three games we saw of him so far, he is clearly a month or two away from match fitness.

In the middle of the park, despite investing in Norwegian Marius Lundemo, they have still to find a combative defensive midfielder of the ilk of Nuno Morais, who was never replaced. Apoel’s midfield has no coherence and no bite, allowing their opponents the freedom to burst forward unopposed.

The central defensive pairing of 36-year-old Giorgos Merkis and the inexperienced and untested Brazilian Rafael Santos does not inspire any confidence. Apoel have conceded five goals, and should have been more, in their opening two league games. Merkis, despite his passion and aggression is not getting any younger, while Santos’ lack of positional sense often allows the opponents the freedom to shoot unopposed.

There is also the problem that a number of key Apoel players want out, if rumours are to be believed

Jordanian Musa Al-Taamari, who for the past few years almost singlehandedly took Apoel past the post first, is on his last year and refuses to sign an extension to his contract. The Greek press has recently hinted that the Jordanian has already agreed with Greek champions Olympiakos for season 2021/22. If this were to be true, Apoel will lose their most prized asset for nothing next May, unless they can find another suitor fast.

Nottingham Forest have made a bid for left back Nicholas Ioannou but it was turned down by the board as it was considered too low. The problem though is that Ioannou, who captained the Manchester United reserves and was about to break into the first team in 2013 before a knee injury tampered with his career’s brilliant prospects, wants a second chance to prove himself in England.

A third unhappy player, Ghayas Zahid, returned to Apoel after spending a successful year’s loan at Greek side Panathinaikos but in a recent interview he quite clearly stated he wants to continue his career playing in a better league.

All three players have been poor in all games they have played in so far this season.

Then there are the players that Ouzounides has ‘inherited’ but does not seem to rate very highly, like Kevin Lafrance and Antonio Jakolis and perhaps even Christos Wheeler who Apoel paid a vast sum for Cyprus standards to snatch him from AEL. Savic, who is on a very high salary, refused to take a pay cut and his future at Apoel also looks bleak.

Ouzounides seems confused and contradicts himself. After the game against Gjilani he said that his players need time and supporters need to be patient. Three days later, after the AEK humiliation, he said ‘this cannot carry on, a lot of things have to change’.

It may still be early days but one thing is certain, Apoel is in a very big mess. The easy option of the board sacking the coach and releasing players to bring in new ones may not be feasible any longer, as the money has dried up for the Nicosia team.

There have been calls by many supporters that the president of the board should resign, as over the years he has been the only person that has remained at his post.

Whether he does or not is a different story but, whatever happens, Apoel are in for a long, long season and the risk of entering the slippery slope that saw Omonia Nicosia disappear for many years before their resurgence last season, seems to be a concrete risk as things stand.