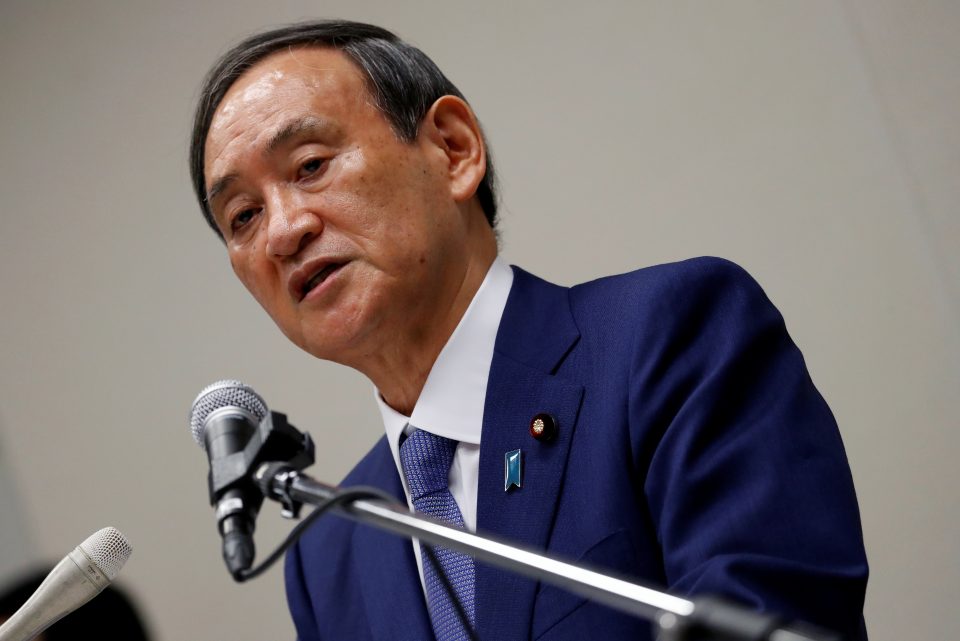 Japanese Chief Cabinet Secretary Yoshihide Suga on Wednesday said he would run for leader of the ruling Liberal Democratic Party (LDP), formally entering a race he is already heavily favoured to win to become the next prime minister.

A longtime aide to outgoing Prime Minister Shinzo Abe, Suga said he decided to stand for party leader to avoid a political vacuum during the coronavirus pandemic.

Abe announced his decision to resign last week, citing poor health. The LDP’s majority in the lower house of parliament ensures the party’s next leader will succeed him as prime minister.

Although he had remained silent about his plans up until Wednesday’s announcement, Suga appeared to have clinched the race earlier this week. when media reported that some of party’s most powerful factions would back him, and after the LDP opted to have a slimmed-down leadership race.

By choosing not to poll all of its members for the race, the LDP has concentrated the vote in the hands of party heavyweights, who favour Suga over rival Shigeru Ishiba, a former defence minister more popular with the public and grassroots party members.

“In this time of national crisis, we cannot permit a political vacuum,” Suga told a briefing.

“I decided to run after giving very deep thought to what I can do, as a politician and as a member of Abe’s administration, to bring back as soon as possible the day when people can live without fear.”

He said that as leader he would continue Abe’s aggressive fiscal and monetary stimulus policies and singled out hard-hit rural areas.

Suga’s rise from a city councillor in Yokohama is notable in a country where top political office is often the preserve of powerful families. Abe, for instance, is the grandson of a premier and the son of a foreign minister.

In his briefing, where he appeared tense and read from prepared remarks, Suga highlighted his humble beginnings on a farm in the snowy northwestern prefecture of Akita, and said he understood both urban and rural voters.

His main competitors in the Sept. 14 party vote are Ishiba, the former defence minister, and ex-foreign minister Fumio Kishida.

The slimmed-down election will include members of parliament and three votes from each of the 47 prefectures – an advantage for Suga that excludes the rank-and-file.

Many party chapters will poll rank-and-file members to decide how to allocate their three votes, but experts say this is unlikely to dent Suga’s momentum.

Financial markets also favour Suga, assuming he will continue with the reflationary “Abenomics” strategy aimed at reviving the economy.

He has repeatedly talked about the need to quickly bring back tourism to help revitalise regional economies, sending a clear message that re-opening the economy would trump a return to a stricter pandemic response.

“During Abenomics, stocks rose, the yen was weak and brought unprecedented profits for companies – that’s something to be grateful for,” Ishiba said on Fuji TV on Wednesday when asked how he would improve the lives of low-income workers and the unemployed.

“But what do we do with the dark side of that? That’s the most important question in the post-Abe era,” he said.

Apart from inheriting an economy in the throes of its worst downturn since World War Two, Abe’s successor will have to try to ensure that next year’s Olympics – already delayed for a year by the pandemic – go ahead as planned.

In recent months, Abe had seen his support fall to one of the lowest levels since taking power in December 2012 because of growing discontent among voters over his handling of the pandemic and scandals among LDP members.

Suga’s other rival, Kishida, told Reuters in an interview on Wednesday that Japan would need to keep taking bold fiscal steps for the next few years to combat the pandemic-related economic damage, but that it must not fall behind when other countries start to normalise monetary and fiscal policies.

It will be difficult for Messi to remain with Barcelona, says his father