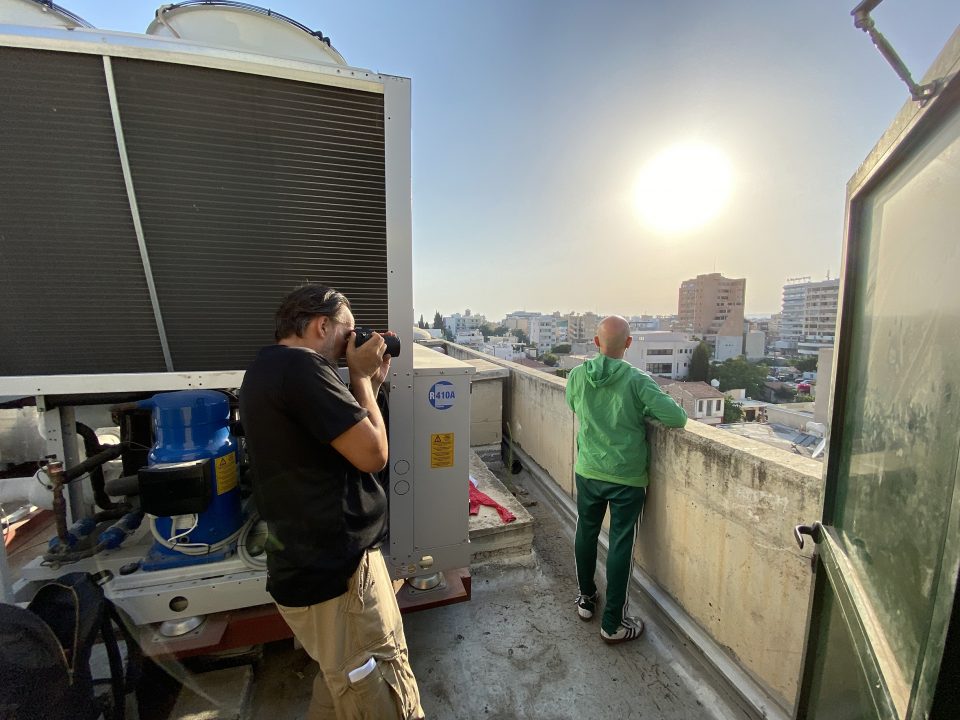 On Friday there will be a man on Rialto’s roof but he’ll change locations, traversing the theatre as part of the performance that re-opens the theatre following its summer break. The play, titled Man on the Roof, will open the new season in a rather different style, combining live theatre with streamed performance.

“In a locked-down universe,” states the play’s description, “where live communication is only a faint memory, SRSLYyours & friends invade Rialto Theatre to examine the resilience and fragility of the live arts amidst imposed digital realities.” Merging live theatre and streamed performance, director and dramaturge Achim Wieland along with protagonist and co-dramaturge Marios Ioannou and filmmaker Sakari Laurila create an interactive manifesto making Theatre the protagonist and revealing its universal value in its physical, political and spiritual dimension.

The actors will perform in several areas of the theatre and these will be projected outside, from where the audience will be watching, and which will be the stage for a physical reunion of the protagonist and the live show.

“Like Oedipus’ quest to end the plague that has befallen Thebes,” director Achim told the Cyprus Mail, “the work discusses aspects of what we believe could have befallen humanity before any pandemic took place. Without spoiling the live experience of the work, I can also say that the performance goes to the very core of what ‘live-ness’ means – how much we value it.

“It also speaks about the sense of ‘togetherness’ in a culture that has fallen empty of reasons to be together in the first place. In this way, it addresses a new kind of loneliness too. A loneliness of the world that I would sometimes like to tell my mother, my father, or my grandparents about. It almost feels like a real pandemic.”

With excerpts from famous acts, arias and texts from world theatre and music, the performance will be in a variety of languages – Greek, English, Russian, French, German – but there will be English subtitles.

Certainly, the most fascinating element of this performance, which makes it a memorable season-opener for Rialto, is the combination of live theatre with a broadcast performance. It will be like watching a film being created live right in front of you.

“Everything about this work is new territory,” commented the director. “Combing video-streaming with live performance, theatre with filmmaking, professional actors with people from all walks of life, combining our own text with existing plays and integrating a variety of types of Live-Performing Arts into one cohesive narrative.

“This idea of entering an abandoned theatre,” he added, “came to mind during the lockdown. Everything suddenly stopped and it felt as if all these temples of culture – opera houses, theatres, symphony halls – fell into a lasting sleep. I have been to empty theatres before and there is something beautiful yet tragic about them. Huge. Silent. Empty. Without a heart and a soul.”

The creators behind this performance are an international group of performers, dramaturgists, researchers and visual artists from Cyprus, Germany, Japan, Sweden and Greece called the SRSLYyours Theatre Collective.

Following the current safety standards for the audience, Man on the Roof is an outdoor performance with limited seating so viewers must pre-book their seats, either online at www.rialto.com.cy or by calling the Rialto’s box office.

Man on the Roof