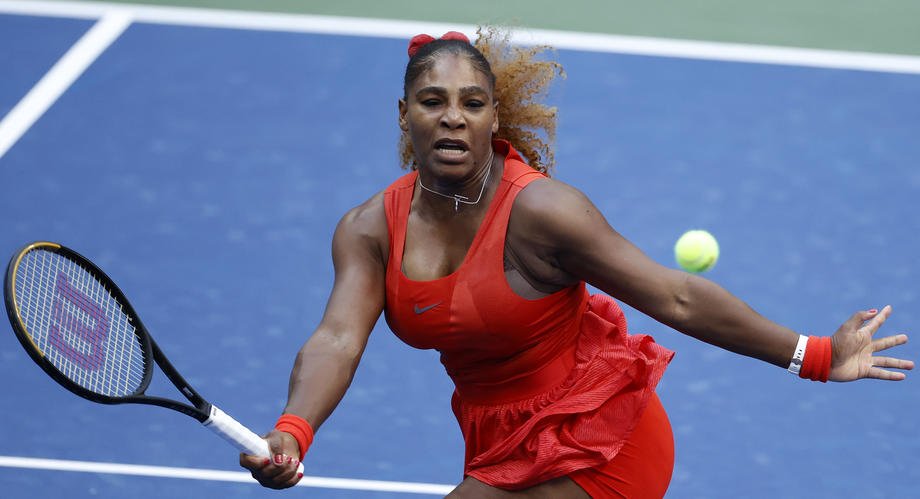 Serena Williams of the hits a return to Kristie Ahn

Serena Williams took her first step toward a record-equaling 24th Grand Slam title on Tuesday by defeating Kristie Ahn 7-5 6-3 in the first round of the U.S. Open.

The 38-year-old showed signs of nervousness early on, double faulting twice to hand her opponent the first game before going 2-0 down after a routine hold from Ahn.

But Williams fought back, winning three straight games before breaking Ahn’s serve to close out the first set.

Ahn broke the third seed’s serve to start the second but Williams quickly found her footing, firing off 13 aces and 28 winners during the match while harnessing her powerful return to keep her opponent on the run.

A final serve forced Ahn into an error as Williams claimed a record 102nd U.S. Open match victory, her first straight-sets win since the sport returned from the COVID-19 shutdown.

Williams, who next faces Margarita Gasparyan of Russia, told reporters she struggled to find her rhythm at first as Ahn displayed impressive versatility.

“She really strikes the ball really hard. She mixes up a lot. She plays a lot of the different shots,” said Williams.

“You don’t really know what to expect.”

In typical fashion, Williams used her powerful serve to gain the advantage, winning 85% of her first-serve points with a fastest serve of 124 mph.

One of the most popular headliners at Flushing Meadows every year, she faced empty stands inside Arthur Ashe Stadium with spectators barred from the Billie Jean King National Tennis Center due to concerns over the ongoing COVID-19 outbreak.

“The hardest is making sure you stay pumped,” Williams said, reflecting on the lack of fans. “For me it was clearly easy because I’m always overly passionate. I love being passionate. It’s what I’m best at.”

Williams, who reached the final of the U.S. Open in her last two campaigns, is gunning for her first Grand Slam title since 2017 to equal Margaret Court’s record in a depleted field in which six of the top 10 players are not competing this year.

She had a frustrating stretch of performances leading up to the tournament, losing in the Top Seed Open quarter-finals before crashing out of the Western & Southern Open in the third round.

“I’ve been losing matches on literally one point that could swing a match a different way. I’ve been playing a ton of tight matches,” Williams said.

“I felt like, all right, I just wanted to be Serena focused from the first point to the last point no matter what happens.”