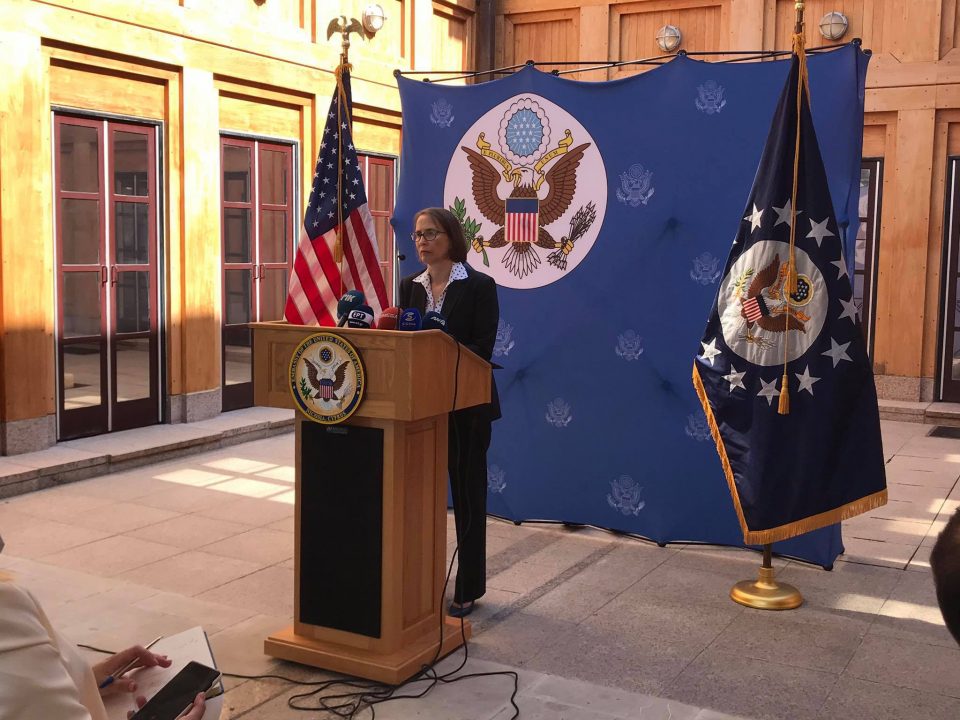 US Ambassador to Cyprus Judith Garber hailed the strengthening of bilateral ties with Cyprus after the partial lifting of the arms embargo.

The partial lifting of the embargo was announced on Tuesday night and will last for one year – with the possibility of renewal.

It applies to non-lethal systems which Foreign Minister Nikos Christodoulides told state broadcaster CyBC later on Wednesday means search and rescue equipment or radars to be used for monitoring the area around Cyprus for various reasons such as terrorism or for locating migrants.

The question on many people’s lips is about the timing and whether the decision also acts as a signal to Turkey – which the ambassador denied.

Speaking at a press conference at the US embassy in Nicosia on Wednesday morning, Garber reiterated that the decision has nothing to with Turkey and its activity in the region.

“Some will ask if we are taking this in response to the most recent developments in the region, the answer is no,” she said.

“This determination which has been in process for months is a consequence of a growing security partnership with Cyprus and our assessment of the Eastern Mediterranean as a region of growing strategic importance in an era of great power competition.”

Asked about the Turkish response to the decision, she said that: “The US informed Turkey of this decision last night, we have urged that there not be an overreaction to this decision.”

Turkey has slammed the decision saying it “disregards the equality and balance” on the island and said it expected its NATO ally to “review” it.

“Otherwise, Turkey as a guarantor country will take the necessary reciprocal steps in line with its legal and historical responsibility to guarantee the security of the Turkish Cypriot people,” it said.

Christodoulides told CyBC that Cyprus’ relations with other states are not aimed at turning against Turkey but rather aim at upgrading security in the region.

The US ambassador also outlined some key goals and criteria for Cyprus to work towards in order to further bolster the relationship with the US.

“The legislation that enabled this policy decision calls on Cyprus to continue its efforts to implement strong anti-money laundering regulations and financial regulatory oversight and to take the steps necessary to deny Russian military vessels access to ports for refuelling and servicing – the US urges Cyprus to take those steps,” Garber said.

The relationship between the US and Cyprus has often been complex, with Washington viewing Nicosia as being too cosy with Moscow.

In recent years however, Nicosia has taken steps towards closer ties with Washington – such as signing a statement of intent in 2018, the East Med Law and military training programmes for Cypriot soldiers.

But Cyprus’ strong links remain a divisive issue, even within local politics.

In July, Defence Minister Charalambos Petrides said that Cyprus will not cut ties with Russia because of the US training programme.

After a meeting with Akel general-secretary, Andros Kyprianou, the minister said that the goal was to cooperate with “all friendly countries, no exceptions”.