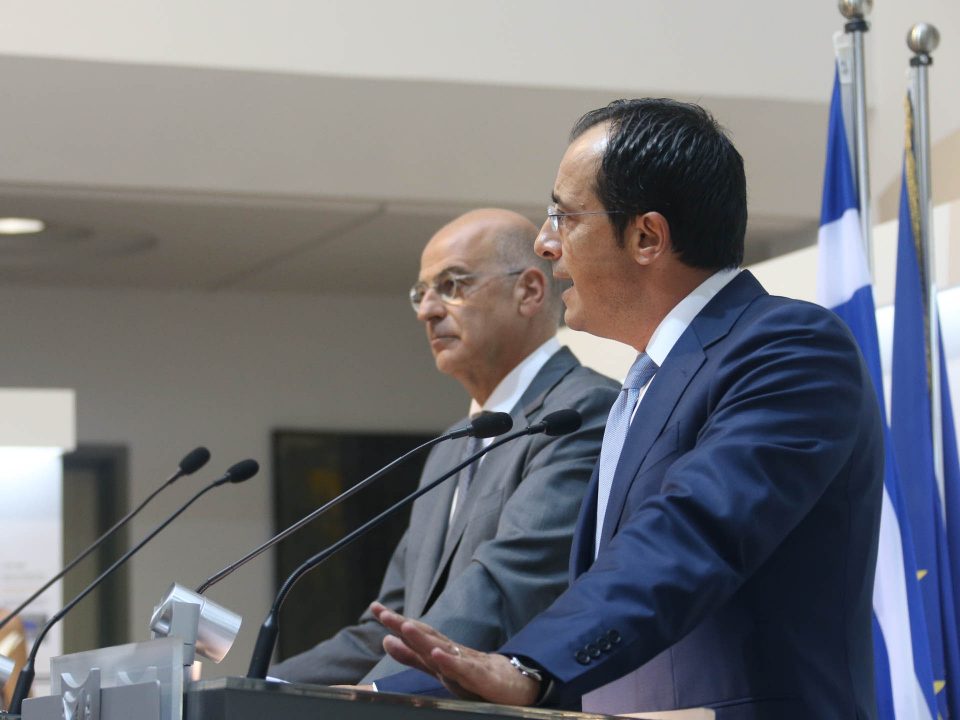 Dendias and Christodoulides at a prior meeting in Cyprus

The Greek minister’s discussion focussed on the prospect of resumption of Cyprus talks from the point they stopped in Crans – Montana, the issue of the fenced-off area of Famagusta and developments in the Eastern Mediterranean.

Dendias also informed Christodoulides about the initiative of NATO Secretary General Jens Stoltenberg in relation to the Greek-Turkish issues.

Turkey’s violations in the Eastern Mediterranean, the Greek-Egyptian agreement on the delimitation of an Exclusive Economic Zone and the Cyprus issue were discussed on Friday during a meeting between Dendias and Guterres.

In statements after the meeting, Dendias said he informed the UNSG about the situation in the Eastern Mediterranean and how Turkey’s violations of international law are creating problems for stability and peace in the region.

“We also had the opportunity to exchange views on the future of the Cyprus issue. How things might evolve after the elections in the occupied part,” Dendias said.

Invited to comment whether Athens was displeased with the document the NATO General Secretary Stoltenberg submitted to Greece and Turkey, Dendias replied that they haven’t studied the document yet.

Meanwhile, on Friday Christodoulides had a telephone conversation with the Italian Foreign Minister Luigi di Maio during which they discussed the next steps based on the political understanding reached at the Informal EU Council of Foreign Ministers in Berlin on August 27 and 28.

The two ministers exchanged also views on the situation in the Eastern Mediterranean.

New passages: how a book changed my life