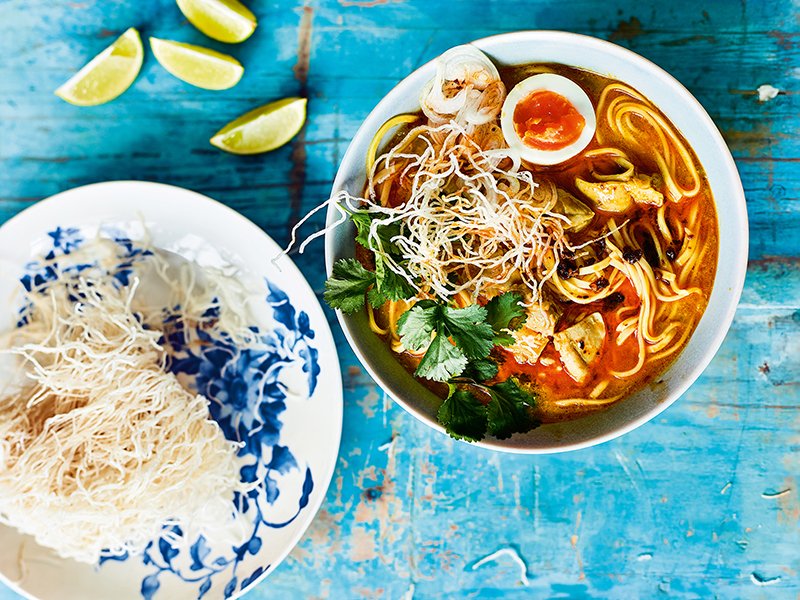 Salt, sweet, sour, spice, umami and crunch – Burmese food has it all, and yet it’s still relatively unknown in the West.

However, it’s hardly going to stay this way for long, particularly with the help of Emily and Amy Chung and their new cookbook, The Rangoon Sisters. The Chungs have Burmese parents and their nickname comes from the largest city in Myanmar – Yangon – which is also known as Rangoon.

Most people still aren’t really familiar with Burmese cuisine, which Amy drily describes as “absolutely delicious, obviously”. So, what sums it up?

“It does have influences from neighbouring countries, like Thailand, China and India, so there might be some familiar flavours and spices – and there’s lots of onion, garlic and ginger,” explains Amy. “But Burmese cuisine has a lot to offer as an individual cuisine as well; it has curries which tend to be more mildly spiced and aromatic after slow cooking, and you also have lots of vibrant fresh salads, which are more substantial than your average salad. It’s full of textures and different condiments.”

Emily says her favourite thing about Burmese food is “the extra bits you can add onto your plate, to make each mouthful a different flavour”. She associates an “intensity and saltiness” with it because of the prevalence of “shrimpy, fishy flavours”. This, coupled with all the dips and sauces that tend to feature, means “you can make your plate your own”, she adds. “So if you’d like lots of chilli flavour, you can have that, and you can alter the sourness as well – there’s something for everybody.”

The sisters were born and bred in South London and say their Anglo-Burmese-Chinese heritage inspires their cooking. Their food careers started at a grassroots level, when they started showcasing Burmese food through supper clubs.

All of the recipes they served for that first ever event are now in their cookbook – starting with chickpea fritters (which Emily calls “a deep-fried crunchy fritter, which has chilli, turmeric, paprika and a bit of coriander, served with a tamarind sour-spicy dip”), followed by ohn no khauk swe – a classic Burmese dish of coconut chicken noodles, often served at birthdays – and ending with mango cheesecake.

5tbsp oil (vegetable, sunflower or peanut), plus extra for browning the chicken

6 hard-boiled eggs, cut in half

Heat the oil in a large casserole dish set over a medium heat. Add the chopped onions and cook slowly, turning down the heat to low-medium and stirring every four to five minutes until softened and starting to lightly brown in colour and become oily but not crispy – this should take about 15 minutes.

Meanwhile, crush the garlic cloves and ginger to a paste using a pestle and mortar, or blitz in a food processor.

Once the onions are ready, add the garlic and ginger paste and fry for two minutes to release the gorgeous flavours. Add a splash more oil, then brown the chicken pieces with the onion/garlic/ginger mix. Add the spices and creamed coconut, breaking it up into smaller pieces as you stir – it should melt. Stir in the toasted gram flour, followed by the chicken stock, fish sauce and the cold water. Bring to the boil and allow to simmer, uncovered, over a low, gentle heat for about 30 minutes. If the broth is too thick, add some water.

For the crispy fried rice noodles, pour vegetable, sunflower or peanut oil into a wok or deep saucepan to a depth of 5cm and set over a medium-high heat. Line a large bowl with kitchen paper and have a heatproof strainer or sieve ready for fishing out the noodles. Test the readiness of the oil by popping a piece of dried noodle into it – it should instantly sizzle (rice noodles will curl up and turn opaque and bubbly). Separate the nest of noodles and add a handful to the oil, frying for a minute, then scoop up with your chosen implement and drain on the kitchen paper. Continue to dry the remaining noodles in batches as above.

Serve the broth hot on a bed of cooked egg noodles. Add a squeeze of lime juice and top with boiled eggs and the remaining garnishes in little bowls for everyone to help themselves to.

The Rangoon Sisters: Recipes From Our Burmese Family Kitchen by Emily and Amy Chung is available now

Seven beauty trends you need to know about this autumn