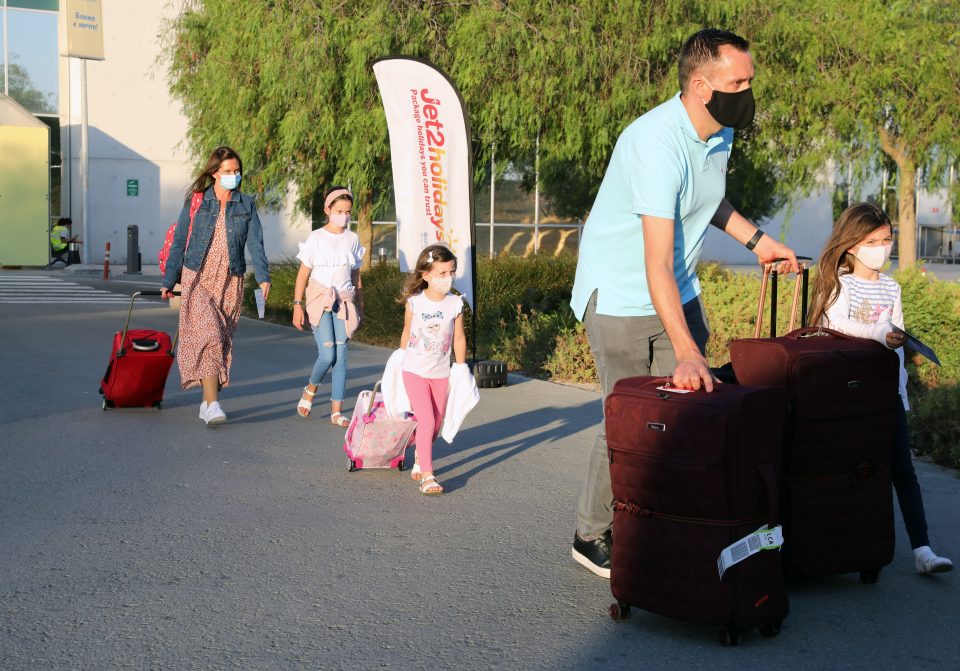 Tourist arrivals in Cyprus declined by a striking 84.3 per cent in the first seven months of 2020

Before the crisis of 2013, the economy was founded on huge piles of risky debt. Little has changed since then

Prior to the financial crisis of 2012/13 and during the recent recovery, the Cyprus economy has relied mainly on the tourist and construction sectors to generate growth. These two sectors in turn have depended heavily on bank debt to support their activities and investments. And it was the reckless extension of loans by banks and the grossly wasteful use of bank debt by property developers and agents, and hoteliers that to a large extent caused the financial crisis.

Yet the Cyprus economy continues to be based on the shaky foundation of huge piles of risky debt. Indeed, since 2013 there has hardly been any real economic adjustment of the private sector in so far as the extremely high levels of debt and non-performing loans have not been substantially reduced.

In 2013, the Cyprus government introduced the “Cyprus Investment Programme” that essentially provided EU passports in exchange for Cyprus property purchases by wealthy non-EU citizens to help prop up the fragile construction and real estate sectors. This development contributed to the Cyprus economy again becoming extremely dependent on the debt-financed construction/real estate and tourist sectors. Moreover, the flaws and vulnerabilities of this “business model” have become increasingly exposed by external shocks emanating from the impact of Covid-19 and by efforts to label Cyprus as a “disreputable” place for monetary laundering and the obtaining of EU passports by “shady” non-EU citizens.

The frantic pace of bank lending in the seven years to 2012 raised the ratio of private sector debt to GDP to a peak of over 330 per cent of GDP on the eve of the financial crisis, with that of non-financial corporations (NFCs) and households exceeding 200 per cent and 130 per cent of GDP, respectively. A large amount of these bank loans had been extended to property developers and hoteliers that were wasted in speculative property ventures and even in the questionable personal use of funds. Such squandering of bank funds was reflected in a sharp rise in the volume of non-performing loans of banks, which amounted to 23 per cent of total loans by end-2012. More than 35 per cent of loans extended to the construction, real estate and tourist sectors were estimated to be non-performing.

The sharp deterioration in the asset quality of bank balance sheets contributed importantly to the financial crisis. And with banks facing imminent collapse and the government finances severely strained the troika of the IMF, the European Commission, and the ECB in conjunction with the government mounted a rescue operation for Cyprus. In March 2013 it was agreed that these institutions would bail out Cyprus with a loan of 9.5 billion euros and that two of the largest Cyprus banks would bail-in their depositors with a “haircut” of 45 per cent. As a condition of the external financial assistance the government among other things was required to implement a strict austerity programme.

In response to slumping economic activity, especially of the depressed property market, the government in 2013 instituted a Cyprus Investment Programme that permitted non-EU persons to secure Cyprus/EU passports in exchange for investments of at least five million euros in Cyprus real estate or other eligible assets. Property developers and real estate agents, which were incurring mounting NPLs on their huge debts partly as a result of the ongoing recession, were expected to benefit from the implementation of this scheme. Most notably, NPLs as a proportion of bank loans extended for construction activity had increased to 78 per cent by December 2014 and that for loans to the real estate sector to 58 per cent.

From 2015 the Cyprus economy recorded a relatively rapid, but an uneven recovery. Real GDP rose by 23.7 per cent between 2014 and 2019 led by a 162 per cent increase in building activity of the construction sector. Value added by the closely related real estate sector rose by a more modest 24 per cent reflecting possibly the potential lack of demand for the very large increase in the supply of residential units. These two growth sectors directly accounted for around 17 per cent of GDP in 2019, and with inputs such as cement, ceramics, pipes and electrical fittings for the construction sector their contribution to the economy’s advance was much greater.

And tourism continued to be a leading sector with its revenue rising by 35 per cent from 2014 to 2019 to reach 2.7 billion euros or over 12 per cent of GDP. Furthermore, the buoyant economic activity associated with tourism such as the provision of accommodation, transportation and food services resulted in the broad travel and tourism sector remaining of key importance to the Cyprus economy.

The most significant change with respect to financing came in the construction and real estate sectors whereby properties purchased by foreigners under the Cyprus Investment Programme provided a major source of funding for property developers and agents. Indeed, it is estimated that over 6.6 billion euros was received for the securing of passports under this scheme over the period 2014 to 2019. Anecdotal evidence suggests also that property developers and many other enterprises are relying more on supplier credits to help finance their operations and investments.

Thus, at the beginning of 2020 and just before Covid-19, the Cyprus economy was still heavily reliant on the broader construction/real estate and tourism sectors for growth. The private sector remained highly leveraged with a debt to GDP ratio of over 167 per cent for NFCs, and exceeding 92 per cent for households. And most significantly, a high proportion of the private loans outstanding (estimated at over 35 per cent) were non-performing. Furthermore, the financing of property developers had become increasingly dependent on purchases of real estate by foreigners under the Cyprus Investment Programme.

Beginning in March 2020 the spread of Covid-19 in Cyprus and abroad has had its most devastating impact on the travel and tourist industry. Indeed, tourist arrivals in Cyprus declined by a striking 84.3 per cent in the first seven months of 2020. And with the lockdown of most construction activity from mid-March to mid-May and declining property sales, especially to foreigners under the Cyprus Investment Programme, real value added in the construction sector fell by 12 per cent in the first half of 2020. As a consequence of their contracting incomes, many property developers, real estate agents, hoteliers and other tourist related businesses experienced increased difficulties in servicing their heavy debt obligations including those to suppliers.

In view of this grim situation businesses and households without NPLs were offered the option to suspend debt repayments to financial institutions until end-2020. And with the taking up of this offer by many private entities to “temporarily” suspend debt repayments, and given the bridging loans extended to struggling businesses, the outstanding debt of the private sector most likely has increased in recent months. In addition, the possibility of a resurgence of the coronavirus pandemic and diminishing foreign interest in investing in Cyprus because of its developing tarnished reputation as an investment location renders the prospect of raising income to meet payment obligations including debt and taxes over the short-to-medium term more problematic.

Indeed, with the overwhelming private sector debt continuing to cripple economic growth through among other things hindering banks in finding creditworthy customers with economically viable projects to lend to, the prospects for a sound recovery of the Cyprus economy do not appear favourable. Moreover, the heavy reliance on debt and foreign investments to support ongoing economic activity means that any significant disruptions to financing flows could derail the excessively debt-financed Cyprus economy. In this connection the construction sector is particularly vulnerable in that a drying up of property sales under the Cyprus Investment Programme and/or failure of banks to extend loan payment deferments could cause not only construction activity to be curtailed, but banks and other creditors to suffer as property developers default on their repayments to financial institutions and suppliers.

In essence the heavy reliance of Cyprus on the broader tourism and construction sectors which in turn are very dependent on foreign demand to generate growth has made the economy very vulnerable to external shocks. Covid-19 has drastically reduced external demand for the Cyprus tourist product and to a lesser extent has decreased the purchase of Cyprus properties. Construction activity is likely to be curtailed as well by a reduction in the foreign demand for properties under the much foreign criticised Cyprus Investment Programme. And with the main actors in these two sectors, namely the hoteliers, property developers and real estate agents experiencing falling incomes and being overwhelmingly indebted the prospect of more financial stress involving a cascading in the non-repayment of debt to banks and suppliers is not remote.

The government needs to promote and support the diversification of the economy away from the heavy dependence on the broader construction and tourist sectors. At the same time the viability of the tourist sector cannot be undermined by terminating targeted financial support for businesses in tourist-affected areas, and construction activity cannot be largely halted through an abrupt and unmodified ending of the Cyprus Investment Programme. Limited funds are available for targeted financial support to businesses in that the government currently has reserves in bank deposits of some four to five billion euro and has access to EU facilities such as SURE that provides funding for the payment of benefits to persons temporarily facing unemployment risks owing to the crisis.

There is also considerable funding potentially available from the EU to support the restructuring and reform of the economy. Under the EU’s budget for 2021 to 2027 1.45 billion euros has been allocated to Cyprus. And there will be up to 1.25 billion euros with at least one-half in grants available to Cyprus under the EU’s recently approved Recovery Fund that can be used in diversifying the economy to make it “greener” and more digitally and technologically based. However, to effectively absorb and utilise these EU funds, which has not been the case with the deployment of structural and investment funds from the current EU budget, substantial improvements in institutional competence will be required involving better project preparation and more efficient tendering procedures. Also, as a condition for gaining access to these funds Cyprus will need to agree to implement specific reforms such as those in the area of the education and training systems required by the EU.

However, restructuring the Cyprus economy would be much easier if the economy was not hampered by the excessive indebtedness of the private sector and the current fragile state of the government finances. In this connection the Cypriot culture of not paying debt and taxes which is aggravated by responses to the impact of Covid-19 needs to be fundamentally changed. The Cyprus authorities should deal with the deteriorating debt and tax payments situation by ending as soon as possible the suspensions enabling the deferral of such payments. And banks need to engage more intensively in a case-by-case restructuring of the loans of debtors as well as taking prompt legal and foreclosure action against those that can afford to pay, the so-called strategic debt defaulters. Of course such action would need to be backed by appropriate and timely judicial reforms.

Finally, the government needs to boost its limited finances by reducing its current expenditures including on wage and salary payments and raising revenue through serious efforts to combat prolific tax evasion and introducing a progressive wealth tax in common with advanced European economies. In this context it is noted that the compensation of government employees rose by 5.2 per cent in the first seven months of 2020.

The future of global gas demand