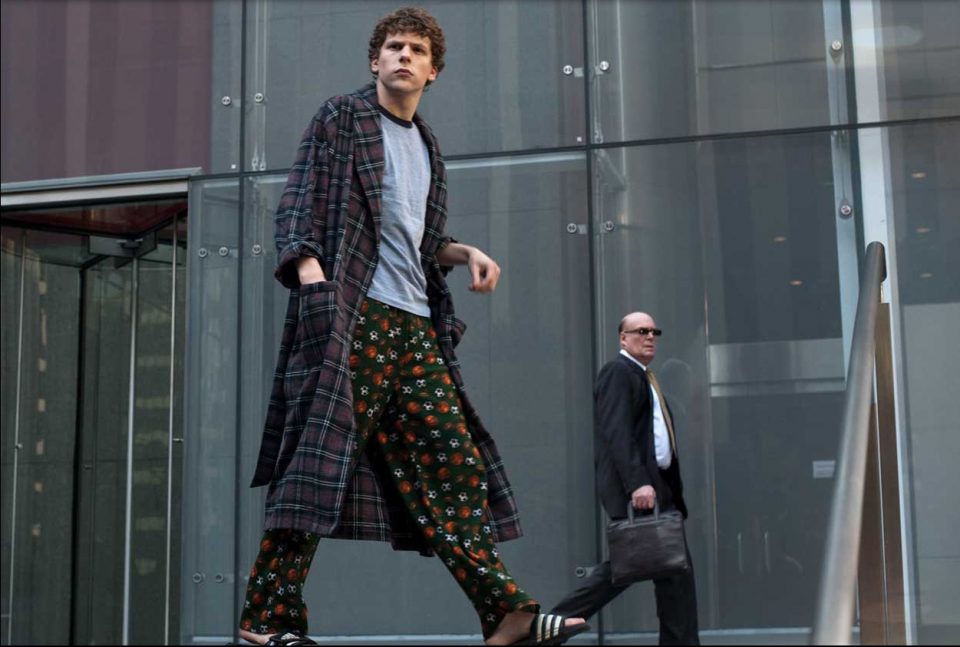 We are a few days away from the 10 year anniversary of David Fincher’s The Social Network being released. The screenplay was written by Aaron Sorkin and was adapted from a book called The Accidental Billionaires, written by American author Ben Mezrich. Although the film chronicles the emergence of Facebook and all the interpersonal legal turmoil that followed, it had no official involvement from any person working at the company. That said, co-founder Eduardo Saverin did have a consulting role during the writing of The Accidental Billionaires.

The Social Network stars Jesse Eisenberg in the lead role as Mark Zuckerberg, Justin Timberlake as Napster founder and Facebook president Sean Parker, Armie Hammer in the dual role of the Winklevoss twins, Andrew Garfield (Hacksaw Ridge, Silence) as the previously mentioned Saverin, and Max Minghella as HarvardConnection co-founder Divya Narendra. Rooney Mara plays Erica Albright, a fictional character very loosely based on a real person, while Rashida Jones plays Marylin Delpy, a fictional representation of one of the real-life lawyers involved in the case.

The Social Network’s frenetic start with the intense back-and-forth at the Thirsty Scholar Pub sets the tone for the rest of the film. Sorkin’s dialogue might present a somewhat exaggerated version of Zuckerberg, but the core traits are there. The lack of empathy, processing different topics seemingly simultaneously, jumping from point from to point as if the mere conveyance of each one renders it old and useless, unworthy of further discussion, the inability to understand that the person in front of you is actually able to match your discursive pace, the cold reduction of aspiration down to the tangible benefits each reached objective will bring. The recipe book is flipped before us in the span of a few minutes.

What follows is the apparent root cause for what will eventually become Facebook. A spiteful man funnels his immense intellect into a petty revenge project with the help of his college buddies. This is the part where I’ll say that none of these people deserve the underlying edge of Fincher’s direction. The Social Network is a good film, very good even, but at times it feels like Mean Girls being directed by Denis Villeneuve. The inadvertent rebranding of vindictive dorks as avantgarde renegades is one of the few things that takes away from the film’s undeniable worth, at least for myself.

The film unfolds in two distinct timelines. The recollection of events and the retrospective evaluation of those events through the narrative device of legal conferences between two opposing parties and their legal teams. This is where we find out people’s views on past events, the element of unreliable narration when we do see past events unfolding before our eyes and the different way in which corroborated statements can be interpreted by different people.

One thing is constant though. Zuckerberg deconstructs and devalues what is beyond his reach and falls back on his tremendous success to reassure himself that he does not need said thing. Eisenberg communicates this disdain and petulance quite well. In fact, Eisenberg’s turn in The Social Network is much more Lex Luthor than his actual performance as the eponymous DC character in Batman vs Superman: Dawn of Justice. A crucial peculiarity if ever there was one.

We see no real violence in The Social Network. To say that the way it builds suspense stems from the notion of intellectual property theft would be a clinical yet accurate way of identifying the film’s source of tension. More bluntly, imagine having your idea stolen, upgraded, repackaged and resold. Ever-escalating anger is the only outcome. Fincher amplifies this with his depiction of slow realization and growing anxiety, helped by clever editing and uneasy scoring.

Sorkin, as critically acclaimed and praised as he is, has also been accused of overwriting, that his dialogue is unnaturally expansive and dense. Regardless of how you view his writing technique, it truly does fit the tone of both the subject at hand and Fincher’s direction. There are numerous examples throughout the film but the meeting between the Winklevoss twins and Narendra minutes after The Facebook went live is one of my preferred ones. Narendra’s “I want to hire the Sopranos to beat the shit out of him with a hammer!” is the exact reaction the audience has. Instant, direct, brutal retribution. The retort from one of the twins is more subtle and equally as funny, while also representing the twins’ inherent gifts, both genetically and socially. “We could do that ourselves. I’m 6’5’’, 220, and there’s two of me.” Perfect.

Whoopi Goldberg reflects on “Losing Everything” after anti-Bush remarks