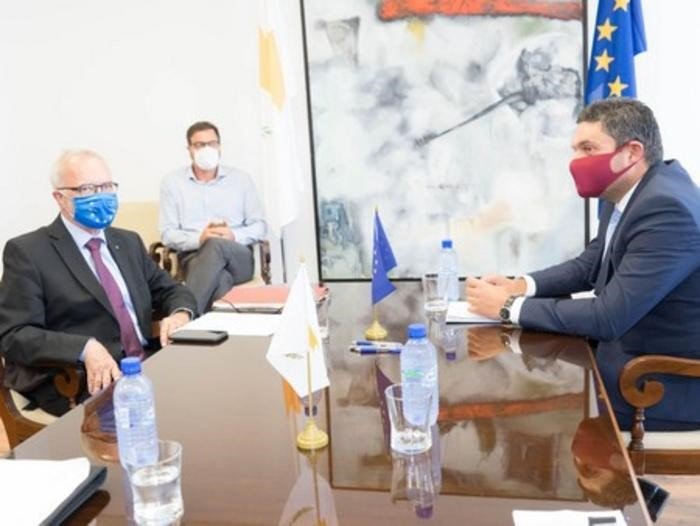 The president of EIB visited Nicosia on Monday and met with President Nicos Anastasiades as well as with the Ministers of Foreign Affairs Nikos Christodoulides, Energy, Natasa Pilides, and Finance Minister Constantinos Petrides, who is also the Cypriot governor of the EIB.

So far this year the EIB has approved €500 million in financing for Cyprus – an amount that is set to rise before the end of the year, the minister said.

This week, the EIB Board of Directors approved additional financing of €200m euros to support local SMEs and MidCaps through the Cyprus Entrepreneurship Fund, Petrides said.

Cyprus was Hoyer’s first trip abroad since lockdown, saying it shows that the bank “is very sensitive as regards to issues of Cyprus”.

“It is a visit that is a sign of EIB’s commitment to Cyprus, which actively supported the island both during the 2013 crisis and today with the pandemic crisis” Petrides said. “The European Investment Bank is a strategic ally and reliable partner for Cyprus” he added.

Cyprus holds the first place among EIB shareholder countries with project financing agreements corresponding to 1.5 per cent of the country’s GDP, said the minister.

The EIB is the long-term lending institution of the European Union. Its support includes Cyprus’ participation in the €25 billion Pan-European Guarantee Fund (EGF) to help companies that are struggling through the current crisis, forming a bridge to the recovery, as well as financial support, intermediated through financial institutions. “We are the first country to sign the relevant Participation Agreements in the Pan-European Guarantee Fund which entered into force on August 27,” said the finance minister.

The Entrepreneurship Fund is an innovative and specialised mechanism, which on the one hand facilitates the access of SMEs to favourable financing, on the other hand, introduces more flexibility and offers the possibility of developing new financial tools to address the serious liquidity problem of SMEs. At the same time, it is possible to spread the risks and the expected returns, ensuring the maximum possible financial advantage for the SMEs.

Cyprus’ Ministry of Finance, together with the EIB is in constant contact with the Cypriot banks to utilise the resources of the Fund, the minister said, expecting an interest in the coming weeks from financial institutions wishing to use the Fund as intermediaries to provide liquidity to businesses.

EIB recently approved a loan of €150 million for the financing of the “CyprusGas2EU project at the Vasilikos Energy Centre, a project aiming to deliver natural gas to power plants in Cyprus, to be able to generate electricity using natural gas while complying with EU directives.

Hoyer said the issue of the gas terminal is of the utmost importance for the EU because it will reduce the great dependence on the use of fossil fuels and is in the interest of the energy diversification and security of Cyprus, as well as the environment.

Navalny has come out of coma, Berlin hospital says (Update)