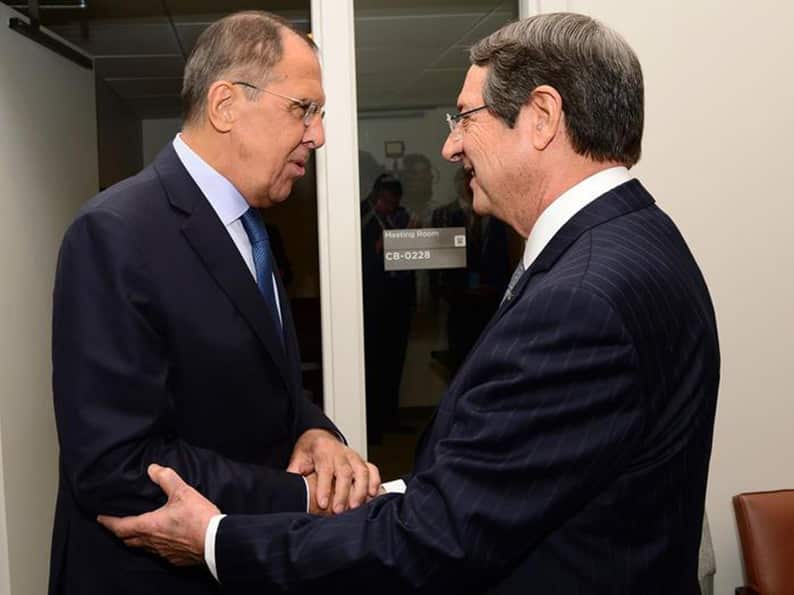 Lavrov during a previous visit

Russia is ready to mediate between Nicosia and Ankara but only if both sides request it, the country’s foreign minister Sergey Lavrov has said just ahead of a visit to Cyprus.

Lavrov arrived in Cyprus late on Monday, after an official visit to Damascus, his first trip to Syria since 2012.

On Tuesday at 11am the chief Russian diplomat will be meeting one-on-one with his Cyprus counterpart Nicos Christodoulides, after which two foreign ministers will be joined by delegates from both countries.

According to an announcement, the two sides are expected to review the full range of Cyprus-Russia bilateral relations and exchange views, among others, on the Cyprus issue and on the situation in the eastern Mediterranean in light of the latest developments. They will also be discussing Russia-EU relations and other regional issues.

At 12.30pm, Lavrov and Christodoulides will make statements after signing a plan for consultations for 2021 to 2022.

After touring a photo exhibition dedicated to the 60 years of diplomatic relations between the two countries in the atrium of the foreign ministry, Christodoulides and Lavrov will attend a working lunch.

Earlier on Tuesday morning the Russian foreign minister will be received by President Nicos Anastasiades and House speaker Demetris Syllouris.

Lavrov’s visit comes days after the United States announced a partial lifting of an arms embargo on Cyprus.

The lifting of the US embargo will last for one year – with the possibility of renewal – and applies to non-lethal weapons systems.

US officials have said however that the lifting of the embargo will be monitored on an ongoing basis and that maintaining this state of affairs is contingent on Cyprus denying Russian military vessels access to ports for refuelling and servicing.

In an interview with Phileleftheros ahead of his visit, Lavrov conveyed Moscow’s readiness to assist Cyprus and Turkey in shaping good neighbourly relations, but only on condition that both interested parties asked for this.

Asked about Russia’s perceived failure to harshly condemn Turkey’s violations of the island’s sovereign rights in its exclusive economic zone, Lavrov noted that the deepening of Russian-Turkish relations “does not, and shall not, in any way affect our dialogue with Nicosia”.

He said Russia has expressed concern over events in the eastern Mediterranean, and described as “unacceptable” any actions that might increase the potential for a conflict.

Disputes are best resolved at the negotiating table.

According to Lavrov, Moscow assesses that both Nicosia and Ankara have the political will to halt a further destabilisation in the region, with the United Nations always serving as the appropriate forum.

The Russian diplomat reiterated that the best way of addressing all such disputes is for the sides to resume talks on the Cyprus problem as quickly as possible.

But, he added, any new Cyprus talks must not be subject to “outside interferences seeking to impose ready-made ‘recipes’ or timeframes”.

Police said they will be taking increased security measures on Monday and Tuesday during Lavrov’s visit.

During Monday and Tuesday traffic will be cut off in some roads in Larnaca and Nicosia.

Members of the public are urged to be patient and follow the instructions of police officers on duty.

What is a lightworker? | George Lizos