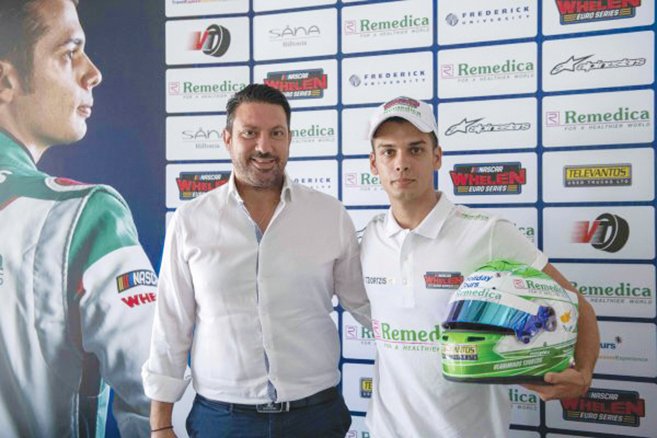 Vladimiros Tziortzis is ready to take part in the Nascar Whelen Euro Series, with the support of Cypriot pharmaceutical company Remedica.

Speaking at a press conference, the Cypriot driver spoke about the new challenge presented by the European version of the most well-known motorsport championship in the USA.

He will be testing his skills in stock car racing after racing Formula 3 cars.

“I have set two goals for this year: stability in results – something that is very important in a championship with many cars on the track – and one of the top three places in the championship,” said Tziortzis, adding that “it is important that the owner of the team is Alessandro Caffi who participated in Formula 1 between 1986-1992 and his presence is very important for the whole team.”

He also thanked his family who have stood by him all these years, Remedica the platinum sponsor as well as his supporters, Televantos Used Trucks, Holiday Tours, Alpinestars Cyprus, Daytona Raceway, Frederick University and Sana Hiltonia.

Dr Neoptolemou noted that “as a company we support the new generation of our country, that’s why we decided to support Vladimiros, who may be young, but he is a great athlete who is distinguished for his discipline, determination and professionalism, values shared by Remedica, reaching 160 countries”.

“We wish every success to a young man, our compatriot. KOA stands next to Vladimiros and to every young athlete who pursues his dream and aims for the top. A dream that cannot be realised without the support of KOA and the sponsors, since the private initiative is very important,” said Andreas Michaelides.

“Vladimiros is an athlete who inspires young people with his athletic success, perseverance, goal-setting and diamond character,” said Zachariades.

Tziortzis will compete in the EURO NASCAR 2 category for up-and-coming drivers, with the colours of Remedica and the No.1 on the doors of a Ford Mustang for Alex Caffi Motorsports.

The car has a 5.7 litre V8 engine that produces 400 horsepower. He has already participated in two test days, while before the start of the championship, another test will take place.

The calendar includes four rounds and the final, which takes place in December.

The championship was scheduled to begin in April but the first race was postponed to autumn. Between April and June, Tziortzis had the opportunity to participate in the EuroNASCAR Esports Series (Virtual Championship).