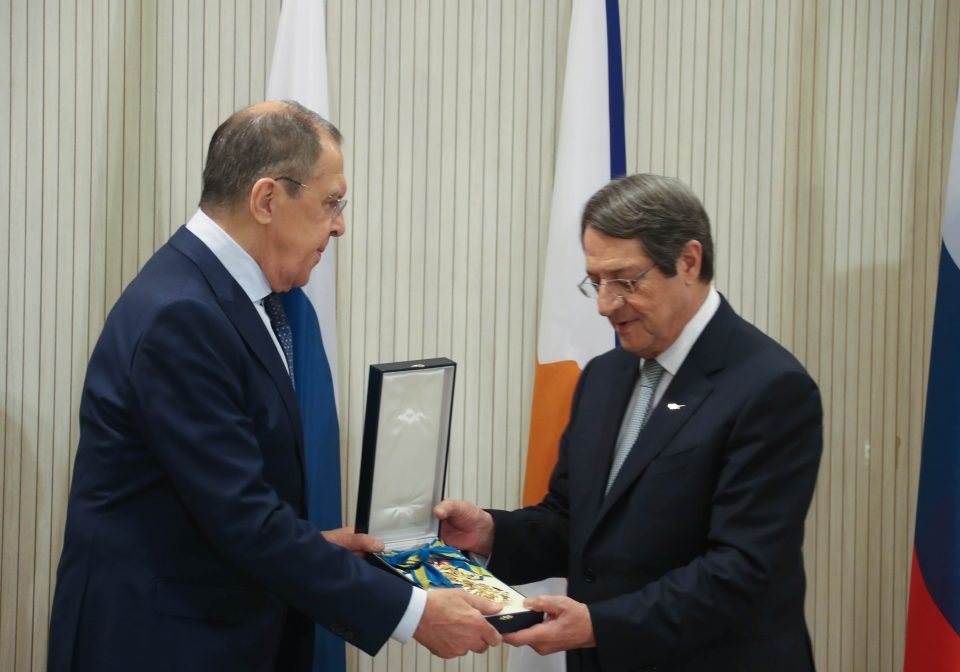 Russian Foreign Minister Sergey Lavrov has been awarded the Grand Cross of the Order of Makarios III for his personal contribution to the development of relations between Russia and Cyprus over the years.

The cross was bestowed on Lavrov by President Nicos Anastasiades during a ceremony at the presidential palace on Tuesday.

Anastasiades said the Russian diplomat was being honoured for his invaluable contribution as foreign minister, but also from other posts he had held, to the continuous development of the historical relations between the two countries, which span 60 years. Moscow established diplomatic relations with Cyprus two days after the foundation of the Republic.

Lavrov said the cross constitutes a symbol of recognition of the role of Russian diplomacy to promote the entire range of Cyprus Russia relations.

Lavrov, who is visiting Cyprus on the occasion of the 60th anniversary since the establishment of diplomatic relations between the two countries, will focus on bilateral relations, the Cyprus issue, the situation in the Eastern Mediterranean, and EU-Russia relations.

Finance Minister Constantinos Petrides will also be meeting with Russian Deputy Minister of Finance Alexey Sazanov. The meeting will take place at the foreign ministry where they will sign a Protocol amending the double taxation treaty between the two countries.

Lavrov and Christodoulides will visit a photograph exhibition, at the Ministry of Foreign Affairs, dedicated to the 60 years of diplomatic relations between the two countries.