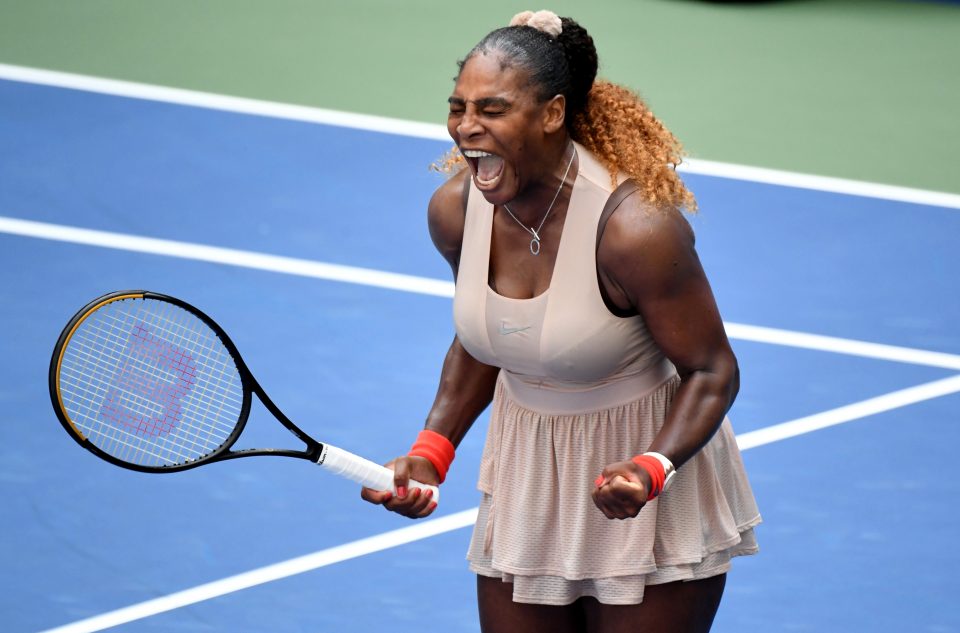 Serena Williams of the United States celebrates after match point against Maria Sakkari of Greece at Flushing Meadows, New York

Serena Williams kept her bid for a record-equalling 24th Grand Slam title alive with a gritty 6-3 6-7(6) 6-3 win over Greece’s Maria Sakkari in the fourth round on Monday.

Williams rallied from a break down in the final set to claim her 100th victory at Arthur Ashe Stadium and set up a clash with Bulgaria’s Tsvetana Pironkova in the last eight.

Belgian Elise Mertens sent Sofia Kenin packing with a 6-3 6-3 victory over the second seed. Mertens capitalised on an error-strewn performance from the 21-year-old American to advance to the quarter-finals for the second straight year.

Mertens next faces former world number one Victoria Azarenka, who rallied from a set down to beat Czech Karolina Muchova 5-7 6-1 6-4.

Next up for the Austrian is a quarter-final clash with Australian youngster Alex de Minaur, who defeated unseeded Canadian Vasek Pospisil 7-6(6) 6-3 6-2.

Also advancing was third seed Daniil Medvedev, who registered a 6-4 6-1 6-0 win over a listless Frances Tiafoe to set up a last-eight meeting with fellow Russian Andrey Rublev, who battled past Italian Matteo Berrettini in four sets.

Elise Mertens produced a near-flawless display to defeat American Sofia Kenin 6-3 6-3 and sail into the U.S. Open quarter-finals for the second straight year.

The 16th seeded Belgian will next face former world number one Victoria Azarenka, who recovered from the loss of the opening set to upset 20th seed Karolina Muchova 5-7 6-1 6-4.

Third seed Daniil Medvedev storms into the quarter-finals with a dominant 6-4 6-1 6-0 win over a listless Frances Tiafoe. He will next face 10th seed Andrey Rublev.

Tenth seed Andrey Rublev rallied from a set down to beat Italy’s Matteo Berrettini 4-6 6-3 6-3 6-3 and reach the quarter-finals.

Rublev fired nine aces and 34 winners while winning an astonishing 85% of his first-serve points.

Second seed Dominic Thiem was pushed in the opening set but recovered to beat 20-year-old Canadian Felix Auger Aliassime 7-6(4) 6-1 6-1 to move into the quarter-finals.

Thiem, the highest seed in the draw after top seed Novak Djokovic was disqualified on Sunday, will next face another youngster in 21-year-old Australian Alex de Minaur.

1500 WILLIAMS BATTLES PAST SAKKARI INTO QUARTERS

Third seed Serena Williams kept her bid for a 24th Grand Slam title alive with a gritty 6-3 6-7(6) 6-3 victory over Greek Maria Sakkari in the last-16.

Williams, 38, rallied from a break down in the final set to claim her 100th victory at Arthur Ashe Stadium.

1330 DE MINAUR THROUGH TO LAST EIGHT IN STRAIGHT SETS

De Minaur, 21, kept his composure to save four set points in the first set tiebreak and although Pospisil fired 43 winners in the match to De Minaur’s 16, the Canadian also had 48 unforced errors.