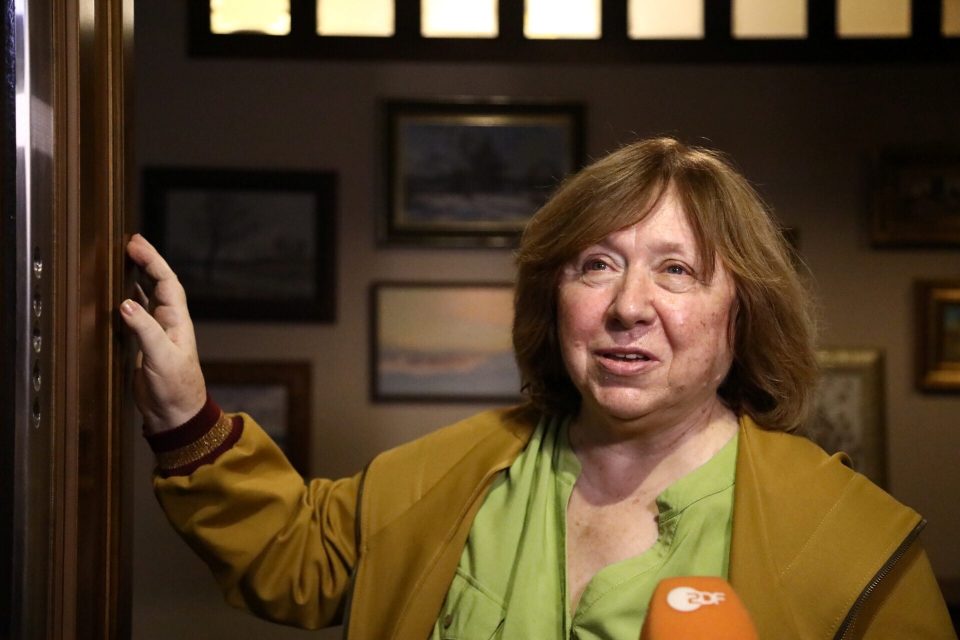 Nobel prize-winning author Svetlana Alexievich accused the Belarus authorities of terrorising their own people on Wednesday as another opposition politician was detained by masked men in plain clothes.

Maxim Znak was the latest figure to be seized in a systematic campaign by the government of President Alexander Lukashenko to round up the leaders of a month-long mass protest movement.

“What is happening is terror against the people,” said Alexievich, who summoned supporters to her home after being harassed by repeated phone calls from unknown numbers and constant ringing by strangers at her door.

“We have to unite and not give up our intentions. There is a danger we will lose the country,” she said.

In a show of solidarity with Alexievich, who won the 2015 Nobel Prize for Literature, diplomats from several European countries went to join the author in her flat.

Znak was detained two days after another opposition leader, Maria Kolesnikova, was snatched in the street by masked men. Both are prominent leaders of protests demanding the resignation of Lukashenko following an Aug. 9 presidential election that the opposition says was rigged. Lukashenko denies vote-rigging.

Znak and Alexievich were the last members of the opposition’s Coordination Council still active inside Belarus.

All the rest have fled, been forced abroad or detained in a crackdown by Lukashenko’s security forces as he seeks to maintain his 26-year grip on power. The interior ministry said 121 more protesters had been arrested across the country on Tuesday.

Lukashenko accuses Western countries of meddling by supporting the opposition. Linas Linkevicius, Lithuania’s foreign minister, told Reuters diplomats had gone to Alexievich’s apartment to monitor the situation, “and in a certain sense they are the defence, because it is harder to resort to brutal methods when diplomatic staff is around”.

“They are visitors to citizen Alexievich, at her invitation,” he said. “She is a citizen, she has a flat, and there are guests in the flat”.

Russian news agencies quoted Lukashenko as saying there was nothing to discuss with the opposition. He raised the possibility of constitutional reform and a new presidential election — suggestions he has made in the past — but said it was too early to say when they might happen.

The 66-year-old leader retains the backing of Russian President Vladimir Putin. The West has so far been cautious about the prospect of provoking Russian intervention, but the European Union is drawing up a list of individuals to target with sanctions.

For Russia, Belarus is strategically important as a buffer state against NATO and a transit country for its exports of oil and gas. Russian news agency RIA said Lukashenko would visit Moscow for talks on Monday.

The detention of Znak on Wednesday was part of a criminal case against the opposition’s Coordination Council “for inciting actions aimed at harming the national security of the Republic of Belarus“, his lawyer Dmitry Laevsky said.

Fellow opposition leader Kolesnikova was seized in similar circumstances on Monday. On Tuesday she thwarted an attempt to deport her by tearing up her passport to avoid being forced to cross the border into Ukraine, two of her allies said.

The opposition said Kolesnikova had been brought back to the capital Minsk and was being held in a pre-trial detention centre. Authorities have not said where she is being held.

Traffic cameras in 2021 part of measures to halve road deaths

From Jazz to opera, events at Technopolis