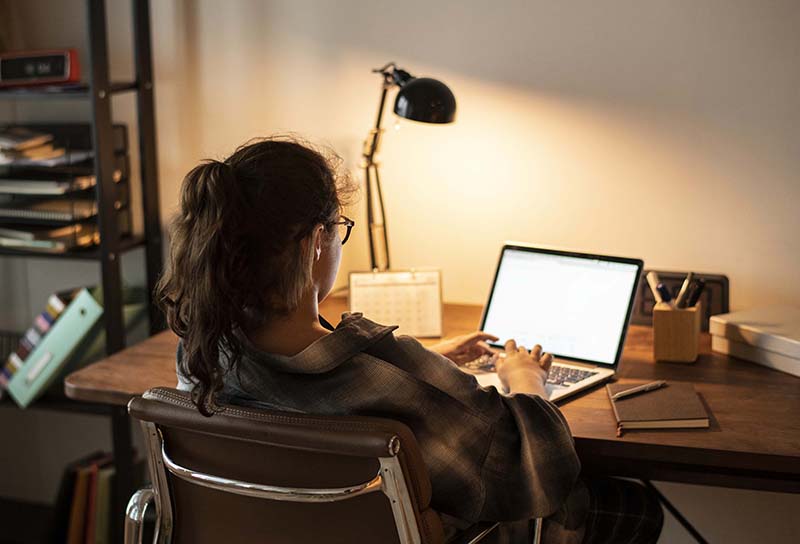 A woman sitting down at her laptop. PA Photo/iStock.

One of the study’s authors Xian Mayo Mauriz said: “Sitting for more than four-and-a-half hours per day is associated with an increased risk of suffering from illnesses such as heart disease. Our research indicates that the prevalence of sedentary behaviour has increased across Europe and this could have significant implications for the health of all European states.

“We propose that the observed increase in the prevalence of physical inactivity could be attributed to people increasingly interacting with technology such as smartphones and streaming services during work and leisure time. Our findings suggest that in addition to encouraging physical activity, governments should focus on reducing the amount of time people spend sitting per day.”

If you’re worried about how much time you’re spending sitting down, there are small things you can do to introduce bursts of activity into your day…

Stand up during work calls

Most of us spend hours each day on work calls, so why not try to stand up and walk about next time you’re chatting to someone on the phone? When you are concentrating on your call, you won’t even notice that you’re wandering about.

If you’re chained to your desk for video meetings, make a promise to yourself to stand up after each call ends. Even if you’re just walking around the room for a little bit, it gets the blood pumping and introduces some movement back into your body.

Even after work, try to remember to stand up every so often – perhaps during TV adverts, or between each show you’re watching on Netflix.

This is a double winner – your plants get a bit of love, and you have an excellent reason to get up and about. If your plants are all indoors, why not take the opportunity to move them around to make sure they’re getting equal amounts of sunshine? Plus, this will add a bit of light weightlifting into your day.

Run up stairs when you’re stressed

When work or life in general gets a bit overwhelming, it can take 10 seconds to work off some of that stress. Whether it’s dashing up and down stairs or doing a few air punches – quick bursts of activity may not make your problems disappear, but they can make you feel better and more prepared to face what lies ahead.

Knock off some household chores

This might not be the most glamorous suggestion on our list, but it’s probably the most helpful. Tackling a meaty household task – like washing your car or clearing out the garage – will get the blood pumping, as well as ticking something major off your to-do list.

Make sure you get up from your desk once an hour

Standing up once an hour isn’t exactly the most exciting of propositions, but you can make it more interesting by setting yourself something fun to do once you are up – maybe a roly poly or a few star jumps if you are fit enough and no-one else will mind.

It’s easy for time to whizz by without you realising you haven’t moved from your desk, so you might find it helpful to set an alarm every hour to remind yourself to get up – even if it’s just for a few seconds.