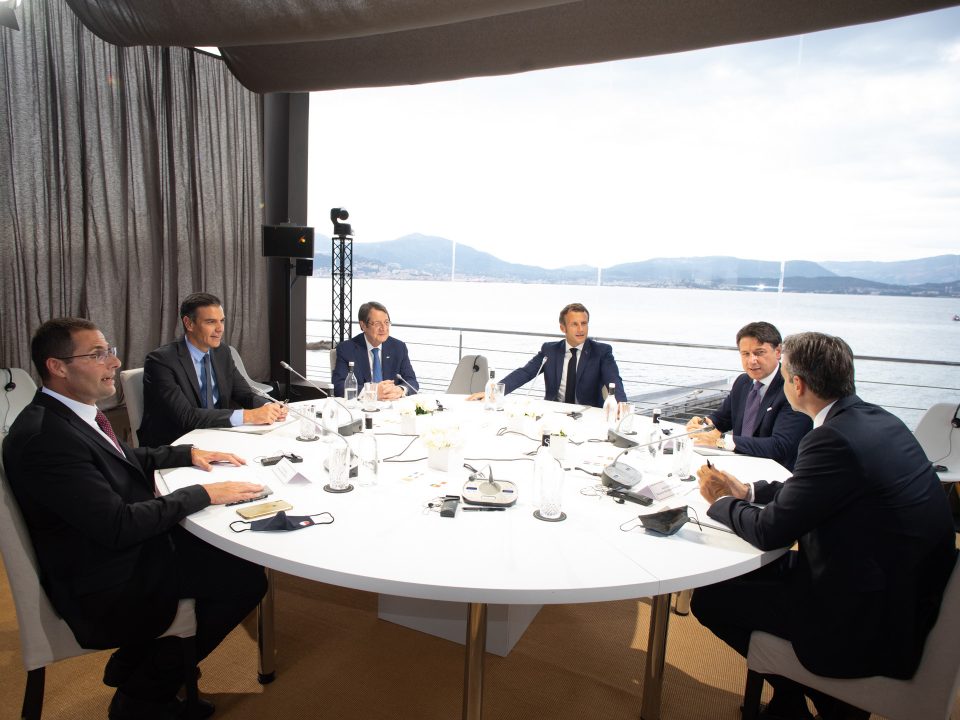 The Med7 conference in Corsica (PIO)

French President Emmanuel Macron said Thursday that Turkey is no longer a ‘partner’ in the Mediterranean, upping the rhetoric against Ankara, even as Greek and Turkish officials held talks aimed at defusing maritime tensions between the two nations and Nato members.

In the lead-up to the ‘Med7’ summit in Corsica, and hosted by France, the French leader said “Turkey is no longer a partner in the Mediterranean region” and that the meeting’s purpose was to clarify its red lines and approach to Turkish aggression against Greece and Cyprus.

The summit was attended by the leaders of France, Greece, Spain, Portugal, Italy, Cyprus and Malta.

In a joint statement after the conclusion, the parties reiterated their “full support and solidarity with Cyprus and Greece in the face of the repeated infringements on their sovereignty and sovereign rights, as well as confrontational actions by Turkey.”

The statement went on to encourage “all the countries in the region to abide by international law, in particular international law of the sea, and encourage all parties to resolve their disputes through dialogue and negotiation.”

The Med7 declaration said it regretted Turkey’s failure to respond to repeated EU calls to end its “its unilateral and illegal activities in the Eastern Mediterranean and the Aegean Sea.

“We reaffirm our determination to use all adequate means at the disposal of the European Union in response to these confrontational actions. We maintain that in absence of progress in engaging Turkey into a dialogue and unless it ends its unilateral activities, the EU is ready to develop a list of further restrictive measures that could be discussed at the European Council on 24-25 September 2020.”

In a tweet, President Nicos Anastasiades said the gathering in Corsica “affords us the opportunity to evaluate the latest developments, taking into account the current state of play in the EU and in our region, and to consider our next steps ahead of the upcoming EU Council.”

On the sidelines of the Med7 Macron met successively with counterparts, including Greek Prime Minister Kyriacos Mitsotakis.

Earlier, the French president stressed the Med7 wished “to avoid an escalation, but that does not mean we should be passive” to Turkish delinquency.

“We must be tough with the Turkish government and not with the Turkish people who deserve more than the Erdogan government. All unilateral actions of Turkey, such as the Turkish-Libyan memorandum, without respecting the rights of Greece, are unacceptable. It unfairly multiplies the challenges.

“We are talking about respect for international law. We want to avoid further escalation, the goal is an agreement but under certain conditions and Turkey must clarify its intentions. We Europeans must look at the red lines to restart a fruitful dialogue with Turkey, because there is no other choice. Europe must therefore have a more coherent voice and a more united stance.”

Ankara immediately hit back at Macron’s remarks. In a statement, its foreign ministry said: “It is not up to Macron to determine the maritime jurisdiction of any country in the Mediterranean or any other region. France must be in favour of compromise and dialogue instead of blindly acting as the lawyer of Greece and the ‘southern Cyprus administration’ who are taking unilateral and provocative steps and taking the EU hostage to serve their close ties.”

Turkey has been sending research vessels and naval ships to accompany them into the eastern Mediterranean, raising tensions with both Greece and Cyprus, as the two countries claim Ankara’s ships are violating their exclusive economic zones (EEZs).

In an opinion piece published on Thursday, the Greek Prime Minister called for ‘meaningful sanctions’ on Turkey unless Ankara pulls its maritime assets from disputed areas in the eastern Mediterranean.

“We do need dialogue, but not when held at gunpoint. What threatens my country’s security and stability threatens the well-being and safety of all EU member states,” Mitsotakis said in an article published in the London Times, Germany’s Frankfurter Allgemeine Zeitung and France’s Le Monde newspapers.

Turkey, he added, still had time to avoid sanctions and ‘take a step back’.

Cyprus’ own maritime dispute with Turkey meanwhile seemed to play into wider EU politics relating to the bloc’s stance on Belarus and the civil unrest after elections there.

Four EU diplomats, speaking to Reuters on condition of anonymity, said EU sanctions on Belarus are being delayed by the Cyprus-Turkey antagonism.

EU foreign ministers gave their political approval for sanctions on senior Belarus officials at a meeting in Berlin late last month over the August 9 elections that the West say was rigged, in a bid to show support for pro-democracy protesters.

A Cypriot diplomatic source told Reuters that Nicosia supported the sanctions but has requested time to study the planned EU travel bans and asset freezes because, as one of the EU’s smallest states, the island does not have the organisational capacity to review them quickly.

“We categorically deny blocking and linking the two procedures,” the diplomatic source said of the Belarus and Turkey issues.

However, many EU states feel Cyprus’ request, called a “study reserve” in diplomatic parlance, is a bid to coerce the other 26 states to agree similar punitive measures on Turkey.

On the same day, Turkish and Greek officials were meeting at Nato headquarters in Brussels for talks aimed at preventing further military escalation in the eastern Mediterranean, a Turkish security source said.

The ‘military de-confliction’ talks, announced by Secretary-General Jens Stoltenberg last week, aim to prevent an escalation from incidents such as a collision between Turkish and Greek warships last month.

The technical talks at Nato will not address underlying territorial disputes but could discuss establishing a hotline between the two militaries.

Wildfires burn along entire US west coast, at least 7 dead