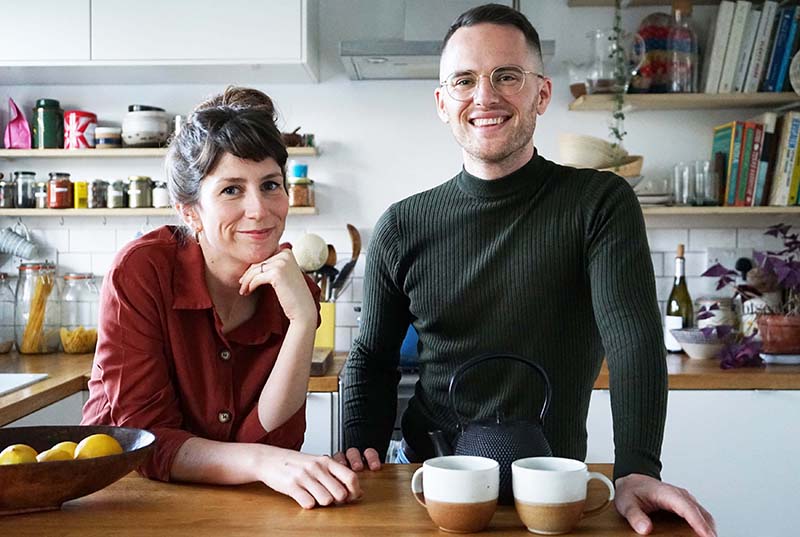 Great British Bake Off 2019 winner David Atherton was “already having a bit of a crazy year” – so throw in the pandemic and “it’s just added to it.”

The Whitby-born health professional was that rare contestant in the feted tent: a calm, collected baker – qualities that have bolstered him during the post-win melee. “Everything is all new and very exciting, but also you feel very lost and you feel like you don’t know what you’re doing,” he says frankly. “You just want to be able to take the opportunities without burning out, basically.”

It’s a pragmatism that has also served the 37-year-old well during the pandemic. And now, he’s celebrating his debut cookbook – although it might not be what you’d expect from a classic Bake Off winner.

For starters, My First Cook Book is for kids, and second, it’s not a glorification of sugar-spun, candied concoctions. Instead, its bedrock is Atherton’s nutrition background, and his interest in how “people who had an upbringing like myself, where their mum was in the kitchen with them all the time, tend to understand food and diet better”, he explains.

Atherton recalls how they had a small house but a big garden, which was filled with vegetable patches, chickens and an apple orchard: “Food was just one of the things we did. We weren’t allowed to watch TV really,” he continues, “so we had to spend our lives playing with each other and cooking and baking. It was idyllic.”

The idea of My First Cook Book is to get all ages in the kitchen, learning about food, and spending time together. “It’s really important to capture kids young, and instead of trying to make it seem like a chore, food’s got to be fun,” Atherton enthuses.

The book is illustrated by Rachel Stubbs, a friend Atherton lodged with when he first moved to London, and funnily enough, the pair of them bagged their cookbook deal even before Atherton appeared on Bake Off.

There’s a mix of sweet and savoury dishes to try, from a ‘magic’ tomato sauce Atherton makes all the time, to octopus-shaped pizzas, tacos, sushi and veggie summer rolls.

8 grapes (chopped in half)

Put one banana into a jug or beaker and whizz with a stick blender until smooth.

Pour into a lolly mould to fill halfway. Push in two grape halves and freeze for one hour.

Whizz the second banana and the strawberries with a stick blender until smooth.

Fill up the lolly moulds and push in two more grapes.

Add the lolly holders and place in the freezer for at least three hours.

Once frozen, take out of the freezer and run under some warm water to release the lollies.

A handful of grapes (chopped in half)

Mix the oats, chia seeds and cinnamon in a bowl.

Grate the apple into the bowl, then add the milk, honey and grapes and stir.

Divide the mixture equally between four jars, screw the lids back on and put in the fridge overnight.

To serve you can add yoghurt, fruit or any topping you would like.

Put the flour, salt, paprika and yeast in a mixing bowl.

Peel and finely grate the carrot.

Mix the carrot, milk and water in a jug.

Pour the carrot mixture into the bowl and stir until you have a sticky dough.

Cover with a damp cloth for 10 minutes.

Knead the dough on a floured surface for five minutes (it may be sticky, but don’t add any more flour).

Put it back in the bowl and cover with a damp cloth until it has doubled in size. (This may take up to an hour).

Punch all the air out of it and divide into eight pieces.

Dust your worktop with flour and use your hands to roll a piece of dough into a long thin sausage.

Sprinkle some seeds onto a plate and then roll your bread snake in it.

Choose one end to be the head, cut a little mouth with scissors and add a tongue made from red pepper. Add currants for eyes.

Shape the snakes on baking trays with baking paper. Leave for 10 minutes and then bake for eight to 10 minutes until golden brown.

My First Cook Book: Make, Bake & Learn To Cook is written by David Atherton and illustrated by Rachel Stubbs

News podcast: A woman’s journey into the lives of Europe’s refugees

Seven beauty trends you need to know about this autumn