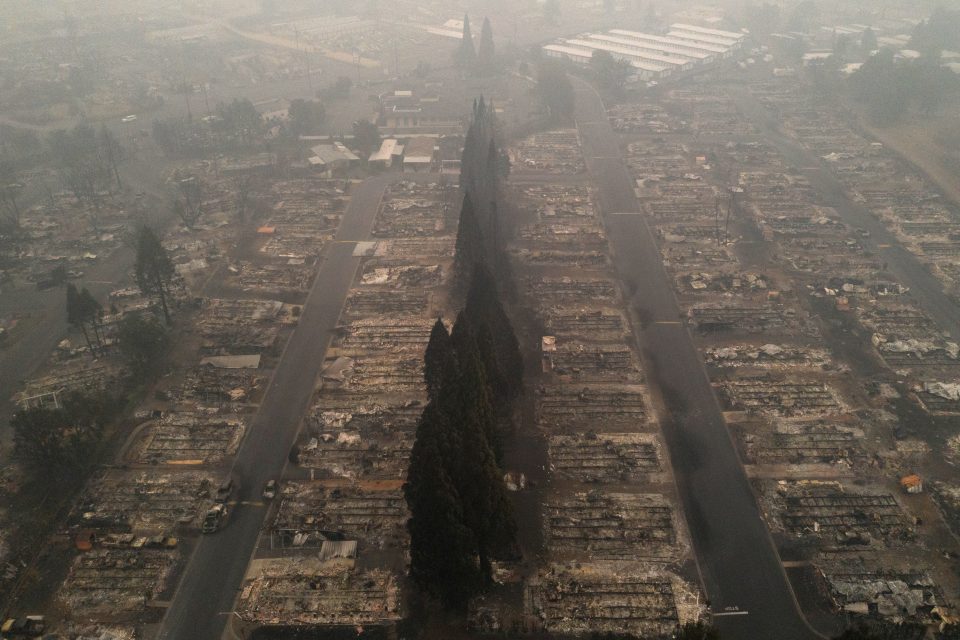 A haze from wildfire smoke lingers over the gutted Medford Estates neighbourhood in the aftermath of the Almeda fire in Medford, Oregon

Around half a million people in Oregon were ordered to evacuate as dozens of extreme, wind-driven wildfires scorched US West Coast states on Friday, destroying thousands of homes and killing at least 24 people, state and local authorities said.

In southern Oregon, an apocalyptic scene of burned residential subdivisions and trailer parks stretched for miles along Highway 99 south of Medford through Phoenix and Talent, one of the worst hit areas, according to a Reuters photographer at the scene.

Online video from the Tacoma, Washington, area showed fires starting in a residential area and setting homes ablaze, and locals running from house to house to warn neighbors.

“Everybody out, everybody out!” a man screamed as firefighters tried to douse flames.

The death toll from the siege of fires on the West Coast that began in August jumped to 24 after seven people were found dead late Thursday in torched mountain communities around 85 miles (137 km) north of Sacramento, California, state fire authority Cal Fire reported.

In Oregon alone the number of people under evacuation orders climbed to some 500,000 – about an eighth of the state’s total population – as Portland suburbs came under threat as two of the state’s biggest blazes merged into one, the state Office of Emergency Management said.

In southern Oregon, residents in communities such as Eagle Point were under evacuation orders, but few left their homes, most staying until they could actually see flames, the Reuters photographer said.

Thousands more people were ordered to get out of homes to the north and south in Washington and California.

“We had four hours to pack up our pets and a few medications and things like that,” said retiree John Maylone from an evacuation center in Fresno, California, after he was forced to leave three of his 30 cats as he fled the massive Creek Fire as it burned within a few miles of his home.

Oregon bore the brunt of nearly 100 major wildfires raging across Western states, with around 3,000 firefighters battling nearly three dozen blazes and officials saying about twice as many people were needed.

Police have opened a criminal arson investigation into the Oregon fire which destroyed much of Phoenix and Talent and started in Ashland near the border with California, Ashland Police Chief Tighe O’Meara said.

Dozens of homes were burned at the Bear Creek trailer park nine miles (15 km) south of Medford, where families returned to find ashes and torched cars, according to another Reuters photographer.

At least four Oregon police departments warned of “fake” online messages appearing to be from law enforcement that blamed left-wing anti-fascists and right-wing Proud Boy activists for starting the fires.

The Oregon blazes tore through multiple communities in the Cascade mountain range as well as areas of coastal rainforest normally spared from wildfires. In eastern Washington state, a fire destroyed most of the tiny farming town of Malden.

Search-and-rescue teams entered devastated communities in central Oregon‘s Santiam Valley to look for missing people after a 12-year-old boy was found dead with his dog in a burned-out car and his grandmother was also thought to have died.

Firefighters said unusually hot, dry winds out of the east created firestorms that spread embers from community to community, and then from house to house.

“This will not be a onetime event,” Brown told a Thursday news conference. “We are feeling the acute impacts of climate change”

Over 100 years of fire suppression by state and federal authorities has created a huge buildup of dead trees and undergrowth to fuel fires that have naturally burned in the West’s forests for eons. In recent decades Americans have built houses in those forests as second homes or due to rising prices in metropolitan areas like San Francisco, Portland and Seattle.

In California, the United States’ most populous state, over 68,000 people were under evacuation orders, most from the North Complex of fires north of Sacramento, as the largest fire in state history, the August Complex, burned over 740,000 acres (299,470 hectares).

Wildfires have burned over 3.1 million acres (1.25 million hectares) in California so far this year, marking a record for any year, with six of the top 20 largest wildfires in state history occurring in the last nine months.

Pupils to be given environmentally-friendly utensils on return to school