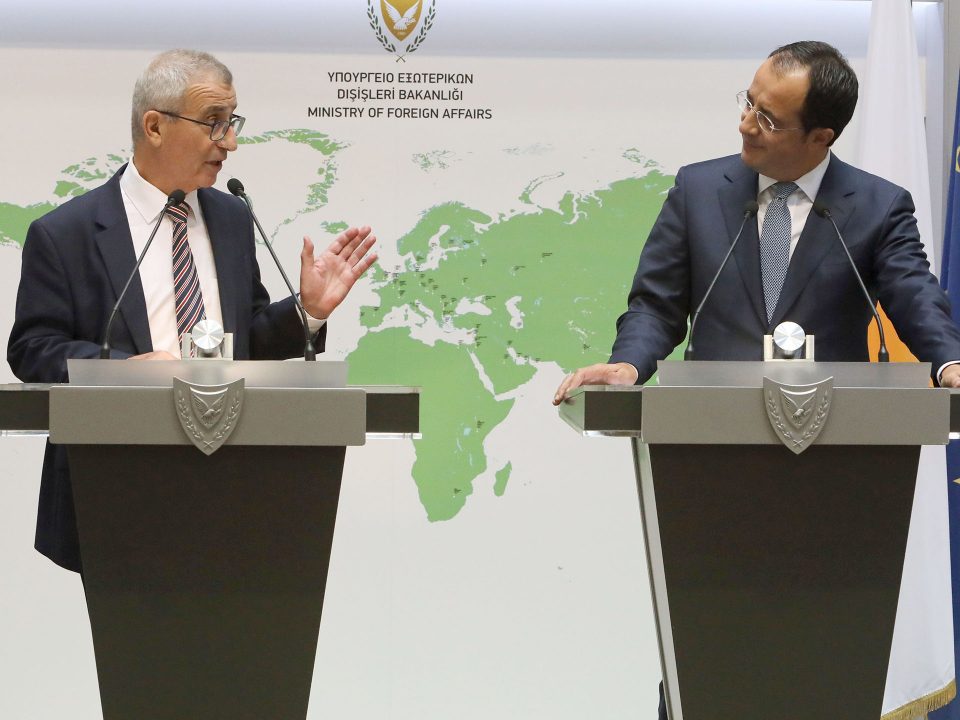 The situation in the eastern Mediterranean is becoming increasingly alarming and the EU needs to act swiftly and decisively to address Turkey’s threats against the bloc’s collective interests, Foreign Minister Nicos Christodoulides said on Friday.

He was speaking after talks in Nicosia with Malta’s Minister for Foreign and European Affairs Evarist Bartolo during which the two reviewed bilateral relations, discussed topics high on the EU’s agenda and exchanged views on developments in Syria and Libya and the migration crisis which is disproportionately affecting the two island states and other front line states

“As you might expect, I briefed Evarist on the situation in the Eastern Mediterranean which, regrettably, is becoming increasingly alarming. Turkey is threatening our collective EU interests, and the stability of the region. We need to act in a swift and decisive manner in order to protect peace and stability around our shared sea. I stressed that we, as Member States, are bound by the duty to defend the core principles on which the EU is based and that there cannot be double standards or selective sensitivity as regards the EU stance on matters of principles,” he said.

Bartolo, whose country has been reported to be lukewarm about tough EU sanctions against Turkey, said the situation in the east Mediterranean needs to be resolved in a spirt of compromise.

“We know that compromise is painful, but we also know that the option of military conflict is even more painful,” he said.

Asked about possible EU sanctions on Turkey, which is among the issues to be raised at a European Council later this month, Bartolo said this was still under discussion. What was important was to be certain that any course of action is effective. “It is important that what we do is effective. Would we be satisfied with symbolic measures,” he queried.

The situation in the eastern Mediterranean was bad and could get worse and so it was important to take the right steps.

He dismissed as absolute nonsense media reports that Malta was discussing giving Turkey an airbase.

Earlier on Friday, after a meeting with President of the Republic, House President Demetris Syllouris, Bartolo said Malta wished for a solution of the Cyprus problem based on international law.

Also referred to the migration issue, and both sides agreed on the necessity for more solidarity with frontline countries, such as Cyprus and Malta, and the adoption of a joint European approach, based on a fair sharing of the burden among EU member states.

According to a press release, Syllouris referred to the close cooperation between Cyprus and Malta, noting that as small island states the two countries depend on international law to defend their rights and interests, such as Turkey’s mounting provocations.

Bartolo said any differences should be resolved based on international law, and expressed his wish for the reunification of Cyprus and the solution of the Cyprus problem on this basis.