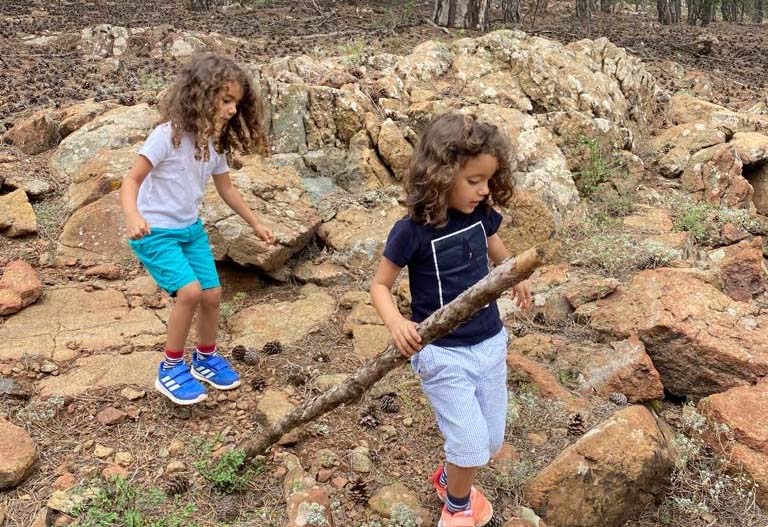 “Mama, I want something to eat.”

I look at my four-year-old son, Leonidas, who has eaten half an hour earlier. I bite my lip and sigh inwardly, while simultaneously scrambling to get creative because I know we don’t have anything he’s going to be in the mood for.

Leonidas is now lying on the floor. I’m not even sure he’s hungry. I suspect he’s bored. I recognise the feeling. It’s hot and we haven’t got anything planned for the day. He’s already vetoed going to the mountains and the beach. He wants to spend the day at home. I’m not in the mood for the beach today either. I did want to go the mountains but I’m just as happy to stay at home and to write, read, bake and take it easy. I’ll do some exercise and we can always go for a walk this evening when it’s cooler.

“What would you like to eat,” I ask him, as he’s lying at my feet. He has started to whine. I feel myself getting irritated. I imagine kicking him. I can’t believe I thought that. What sort of mother am I? Where has this anger come from? I realise I’m holding my breath. I breathe out my anger. It has nothing to do with him anyway. I’m feeling guilty because I haven’t got any proper food in the house. Or nothing my son wants to eat. He doesn’t like chickpeas and he’s already had fruit.

Leonidas gets up and walks over and opens our fridge.

“I want that,” he says, pointing to a courgette our friendly neighbour grew in his garden which he gave to my children last week.

I look at the courgette. I know Leonidas won’t eat it.

I have no intention of doing both. I decide to slice it and shallow fry it. There’s one egg left in the fridge. If I fire that in with the courgette then at least he’ll be getting some protein and zinc.

In the meantime, buoyed up by the thought of his fried courgette Leonidas asks for Branflakes. His twin, Katerina, has already polished off a bowl with gusto. They’d been fighting earlier but now they are best friends again. I’m grateful for the peace.

“Mama will read your story with the monkey,” asks Katerina.

I’ve taken to writing children’s books. It’s become both a creative and fun way to spend my time these days. Beats keeping track of Covid cases and the state of the economy.

The fact she wants me to read it again today is proof she enjoyed it. Not all my stories get asked to be read again.

The courgette and eggs are ready. I’m delighted with myself. I haven’t burned the courgettes this time and they’re not soggy either. I serve the dish with some fresh ‘koulouri’ bread stuffed with feta cheese.

“Leonida your food is ready,” Katerina calls to her brother.

I sit down at the table. Leonidas’ bowl of cereal looks half eaten. He’s now playing imaginary games with his sister. He gives the fried courgette the once over.

“What’s that,” he wants to know, pointing at the egg.

I sit down. I could exercise. I can’t be bothered. The ‘koulouri’ looks rather delicious. It’s fresh. It would be a shame for it go to waste. The courgette goes down with it a treat too. I’ve got some leftover galaktopoureko in the fridge. I think I’ll have that when the kids are out of sight. I don’t feel like sharing.

I’ve finally got five minutes peace to myself. The whining has stopped. The kids are happily playing separately. My husband has done the washing up. My earlier irritation has dissipated. I just wanted some time to breathe and catch my thoughts. I think I was also feeling bored and frustrated. I feel better now that I’ve done something creative. I suddenly feeling like doing some writing and then maybe I’ll also do some exercise. I’m feeling more energised. I’m sure Leonida can be persuaded to go to the mountains for a short walk later on. He loves being outdoors. We all do.

TV shows we love: One Day At a Time

Plant of the week: Tobacco plant once a miracle cure for various ailments