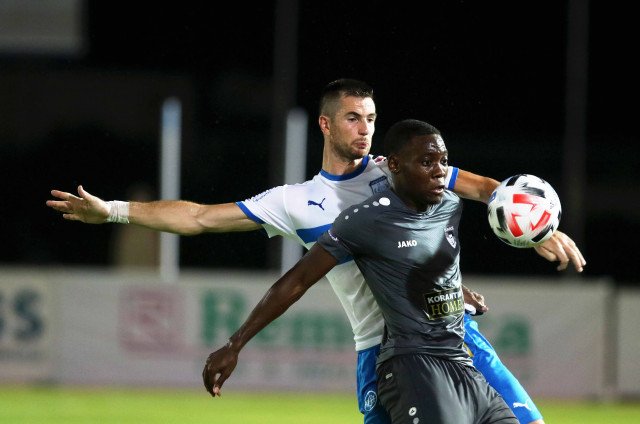 Apollon beat Pafos FC 1-0 on Saturday evening, with the Limassol club taking all three points in a game which started as a fairly cagey affair but became more interesting as the game progressed. This was Apollon’s first win at home this season after drawing with Doxa in the season opener.

The first 15 minutes were uneventful, with Pafos’ eagerness to selectively press Apollon when the latter’s players held onto the ball for too long, particularly when building from the back after possession had been regained.

Apollon’s first real chance came in the 20th minute after an Aguire cross from the left found Dabo near the 9-yard box, whose header connected well but lacked accuracy.

Pafos did well to limit space in the middle of the park, clogging up the area in front of their own box, subsequently funnelling Apollon towards the flanks.

Apollon’s two forwards tried to find space by roaming away from the traditional centre forward position, an example of this being Charlison Benschop receiving the ball as an inside left forward before shooting from just outside the box. His shot was fairly driven but was easily caught by a well-positioned Artur Rudko. Rudko also easily saved a long shot from Diguiny in the 30th minute.

The first half’s last 15 minutes played out with not much to show for either team bar a high number of turnovers following hasty passing or clever interceptions. Both Pafos and Apollon attempted to prevent each other from breaking with any kind of freedom, applying pressure to players that were either tasked to carry the ball forward or receive it in midfield and facilitate a successful buildup.

However, in the last minute of injury time, Apollon’s goalkeeper Joel Mall suffered a head injury after a clash with team-mate Diguiny and had to be substituted off for young Cypriot Demetris Demetriou.

Both teams started the second half with substitutions. Pafos brought on Akale and Angulo for Aurelio and Kuzyk respectively, while Apollon brought on Gianniotas for Matei.

Apollon broke the deadlock in the 57th minute with a goal from Denic. Pedro whipped in a cross from the right which found Benschop. The forward fell to the ground after being marked from behind, however, there was no need to protest for a penalty as Denic pounced on the loose ball and drove the ball into the net from close range.

Apollon threatened to score again in the 61st minute but Diguiny’s shot from just outside the area was blocked by Rudko.

Both managers made additional changes in the 70th minute, with Cameron Toshack bringing on Berigaud for Hepburn-Murphy and Avgousti bringing on Pittas for Benschop.

Pafos’ best chance came in the 83rd minute after a direct free kick from veteran Jason Puncheon was parried by Demetriou.

Meanwhile, Apollon missed the chance of the game in the 85th minute after Dabo went on a mazy run on the left before squaring the ball for Diguiny at the back post, beyond the Pafos goalkeeper. Unfortunately for Diguiny and Apollon, the Frenchman shot the ball wide with essentially an open net in front of him.

There was more drama in the 91st minute after Dudko’s poor decision-making resulted in a goalmouth scramble and a double chance for Apollon ultimately resulting in a corner kick.

Pafos couldn’t really muster a genuine reaction in the last 10 minutes, allowing Apollon to hold onto their one-goal lead until the end of the game.

Pompeo says tensions help no one, US to establish training facility in Larnaca (Update 3)

Anorthosis and Omonia cancel each other out in 1-1 draw