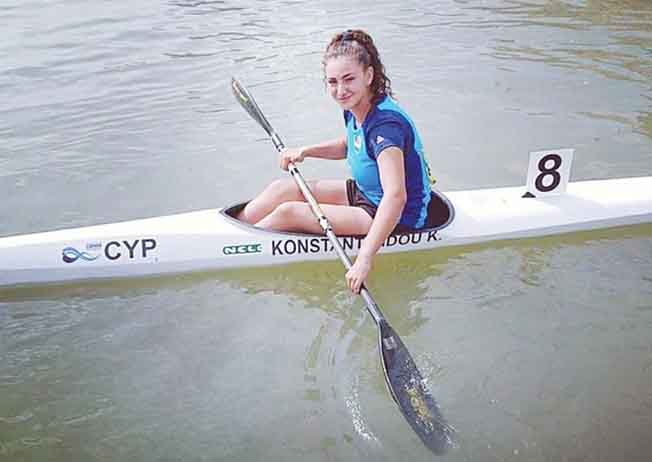 Cypriot athlete Kyriaki Konstantinidou, has distinguished herself by taking first place in the 1000 metre race at the 30th Panhellenic Canoe-Kayak Sprint Championship in Greece.

Konstantinidou participated in the 500 and 200 metre races as well, taking third and second positions respectively.

“We’ve been together since I joined the club”, Diamantis said. “Kyriaki always stood out, both as a human being as well as an athlete”, he added.

Diamantis told the Sunday Mail that Kyriaki has been a champion in every age group she has competed in throughout her development.

“Even though she lives in Lofou, a village roughly 45 minutes away from the club, she comes to train every day”, Diamantis said, praising her determination and discipline.

“This is also reflected in her academic work as she is also an exemplary student”, her coach said before jokingly adding that it’s “best not to jinx her though”.

Speaking on how the coronavirus outbreak affected their preparation and ability to train, Diamantis said that the lockdown confined them to their homes like all people, despite their sport being an outdoor one. “Kyriaki trained at home”, Diamantis said. “She used her one text every day to go outside and jog so that she could maintain her fitness”, he added. Diamantis explained that of course this is not the same as being able to train in the water but it was all that they could do at the time.

The Panhellenic Canoe-Kayak Sprint Championship was the first official competition that Konstantinidou had entered since the lockdown. Even though it’s considered a domestic championship, Konstantinidou was eligible to compete on account of her being a student at a Greek university in Athens where she is studying to become a radiologist. This allows athletes to represent two different federations at the same time, Cyprus and Greece in this particular instance.

In terms of kayaking and canoeing, yesterday marked the beginning of the Pancyprian Canoe-Kayak Championship. The competition ends on Monday.

Later this month, the ICF Canoe Sprint World Cup is scheduled to take place at the Maty-er Regatta Course in Szeged, Hungary. Cyprus will be represented by its two champions, Konstantinidou and Famagusta Nautical Club’s Giannis Odysseos.

“Our sport is an interesting one, different to the sports that are typically popular in Cyprus, so most people on the island aren’t really familiar with it”, Diamantis said. “We invite people of all ages to come and see what it’s like and get to know the sport, no matter which club they choose to do it with”.

Coronavirus: over one quarter against taking vaccine