Many of us who grew up on the island recall our childhoods spent outdoors, in the sunshine, perhaps in an olive grove, filled with adventure and mischief accompanied by our closest allies and regaled with our grandmother’s folk takes.

Pertinently, this is the inspiration behind what could potentially become Cyprus’ first locally produced 2D animated series. The Olive Bunch contains 26 eleven-minute episodes featuring three youngsters enjoying life in occasionally mischievous journeys, while searching for their place in the world, through family relationships and expectations. The three friends, Amira, Stephano and Yani, grow up in Cyprus, surrounded by the Mediterranean and meet outside for inventive play, activities and adventure.

Currently the subject of a kickstarter campaign to collect the funds to finalise the series’ development package to start pitching abroad for co-producers, distributors and broadcasters, the five-member team behind the series is gaining momentum. 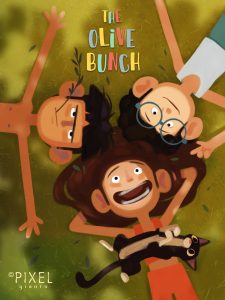 “We had the idea for quite some time but it wasn’t concrete, it wasn’t set in stone, we hadn’t written anything down,” reveals co-creator and producer of the series Maria Pavlou.

“Both I and Katerina Pantela (co-creator and art director) wanted to do something Cypriot, both of us are from Cyprus and we’re both influenced by growing up in a huge family, growing up outside in the sunshine, playing outdoors and seeing our kids glued to their tablets, we wanted to get away from that so we began to talk about our childhood to see what kind of stories came up and then the corona virus hit!” she adds. “That was the perfect time to put it all down on paper,” she affirms.

And this is just one side of the story. “We wanted tradition, heritage, the folktales that we heard from our grandmothers to also be an element in the story; as the series progresses, we will be bringing in creatures from tales that our grandmas told us when we were kids, like the dragon who guards the water well and the Christmas goblin (kalikantzaros),” adds Pavlou.

As in many Mediterranean family settings, the grandmother plays an important role in the series. “At the beginning she’s just a parent figure that takes care of the kids and advises them, but slowly you will see that she owns the olive grove that was in her family for centuries and there’s a spiritual connection with the grandmother and the olive grove, like there was for my grandparents, they had a connection with the land because that’s how they survived, that’s how they made a living. So she loves every tree, she’s named every tree, she knows what’s going on on her land and that’s where the legends and the myths and folktales come to life in,” says Pavlou.

As for the three heroes, it’s all about “realising who they are, finding their place in the community; it’s a traditional community, they want to be more modern, they want to be on their own but there’s the family and tradition keeping them closer to the family so it’s this struggle that every teenager goes through, especially in the Mediterranean, where the family bonds are strong and breaking away is an effort, it takes an inner fight to do that: keep the family happy, keep myself happy and be myself at the same time,” she adds.

To this end, the entire series is embedded in the Mediterranean, even the series’ colour pallet of blue, green, cyan and yellow promotes the region and as the tradition, colours and culture may be second nature to locals, Pavlou is fully aware that The Olive Bunch is more of a Mediterranean project.

“But we want to carry this love and this way of life outside of our little island, we want to transfer the sunshine, being carefree and playing outdoors, we want all the world to see it and be inspired by it and the common denominator is kids, chaos, shenanigans. Wherever you grow up you do all these things, you’re being naughty, you’re messing with your parents, you’re disobedient at times… We’re using these universal attitudes to communicate with the rest of the world. The setting isn’t in a big city, it’s not New York, it’s not London, it’s a rural village somewhere in the Mediterranean, in Cyprus. Were hoping that viewers will connect to it on some level because kids are kids wherever you go,” says Pavlou.

Targeted at pre teens, kids aged six to 11, Pavlou asserts that although the scripts are written for the specific age group, there is humour and messages directed at parents as well. “There are subliminal messages that only adults would get, but it’s funny for the whole family. We’re making it pan generational so that everybody can watch it together and share experiences,” says Pavlou.

As it stands, the Cultural Services of the Ministry of Education only funds feature films, short films and documentaries and this is why Pixel Giant, the animation production company behind the series and founded by Pavlou has opted for crowdfunding.

“We have to work ten times as hard to get noticed, to attract funding from a country that’s never done this before. We do have the newly established tax breaks for the film industry so we tend to use those and advertise that, but it would be nice if we had an initial fund to start with,” says Pavlou.

“We’re coming into this with some experiences, we have connections, we have a network, so we’re hoping that we can strike a deal, not soon, we know that it’s a long journey ahead. When that happens we want to keep a lot of the creative control in Cyprus, co-produce it with big studios in Europe like Ireland and France who are leaders in TV animation and when that happens it will broadcast in a lot of countries. We’re not targeting just our local stations, we’re going bigger than that.”

Pixel Giant has already reached 60 per cent of its target on kickstarter and are hoping to exceed the €15,000 goal and go into their stretch goal which will help them fund part of The Olive Bunch pilot episode.

Should you want to contribute to The Olive Bunch visit https://www.kickstarter.com/projects/theolivebunch/the-olive-bunch/