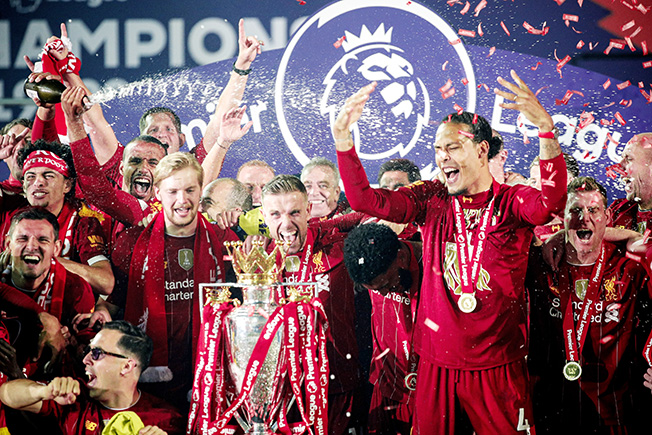 The new Premier League season kicks off on Saturday with some fresh talent but still without fans as the world’s most popular domestic soccer competition continues, for the time being at least, as a made for television product.

The plot is unlikely to be dramatically different from the past two seasons.

After winning the title by 18 points, Liverpool start as favourites again but Manchester City will be strong challengers as they seek their third title in four years.

Chelsea, who have invested heavily in new recruits, will aim to be in the hunt, while Manchester United hope to improve on a third-place finish, 33 points behind Juergen Klopp’s Liverpool.

Leeds United are back in the top flight after a 16-year absence and the Yorkshire club, managed by idiosyncratic Argentine Marcelo Bielsa, start their campaign at Anfield.

The partial return of spectators will be tested at lower league level, with the Premier League hoping to have some fans back in grounds in October, depending on the threat level of the novel coronavirus, but the sofa or pub is the nearest supporters will get to the action this month.

It is a sad state of affairs that fans have reluctantly become accustomed to but the broadcasters are hoping the action will maintain enthusiasm levels until the return to the grounds.

Having ended their 30-year wait for a domestic league title, Liverpool have been surprisingly quiet in the transfer market, with Klopp sticking by the players who dominated last term.

Pep Guardiola’s City will have a familiar look as well but they have lost their inspirational Spanish midfielder David Silva as well as Germany winger Leroy Sane.

While the hopes of a move for Barcelona’s Lionel Messi were ended by the Argentine’s decision to stay put, Spanish wide-man Ferran Torres has joined from Valencia and Dutch defender Nathan Ake has been recruited from relegated Bournemouth.

While it is probably too soon to talk of the London club, who were fourth last season, being title contenders, those signings, combined with young players such as Mason Mount and Christian Pulisic who showed promise last season, should give Lampard the strength-in-depth for a more consistent campaign.

Manchester United fans hoped for a summer of busy transfer market activity, but while the deadline for deals is not until Oct. 5, they have so far added just one new face in Netherlands midfielder Donny van de Beek from Ajax.

The prospect of the Dutchman alongside Bruno Fernandes and Paul Pogba in midfield offers promise but manager Ole Gunnar Solskjaer will be hoping that a deal eventually gets done with Borussia Dortmund for England winger Jadon Sancho.

The United boss, who must also balance the needs of a Champions League campaign, will be keen to add some defensive options to back up an exciting attack featuring talented youngsters Marcus Rashford and Mason Greenwood.

North London clubs Arsenal and Tottenham Hotspur will hope their first full campaigns under managers Mikel Arteta and Jose Mourinho will result in a return to the Champions League positions after they had to settle for Europa League spots.

Leeds are the most interesting of the promoted clubs to watch given the influence of Bielsa and they are joined in the top flight by West Bromwich Albion and Fulham who both return after short spells in the second-tier Championship.

Syria’s many circles of hell

TikTok US could close as China opposes forced sale