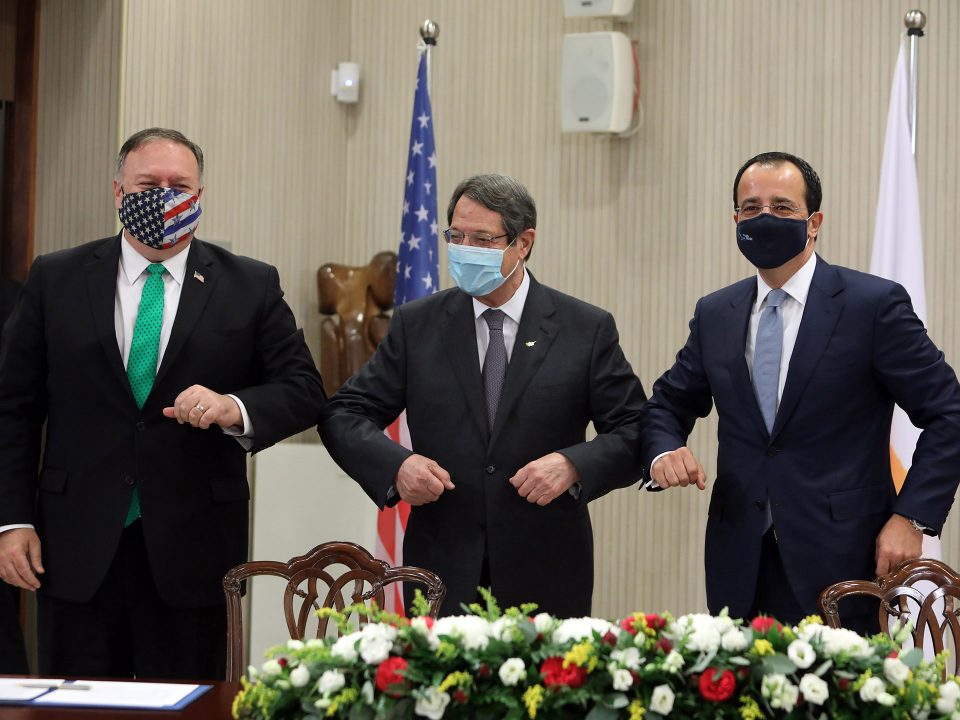 US Secretary of State Mike Pompeo said on Saturday that tensions in the region would not bring solutions to the problems in the Eastern Mediterranean and said Washington remained “deeply concerned”  by Turkey’s ongoing operations surveying for natural resources in areas where Greece and Cyprus assert jurisdiction.

Cyprus has the right to exploit its natural resources including the right to hydrocarbons found in its territorial sea and in its EEZ, the US official said.

Pompeo arrived at the presidential palace in Nicosia for a meeting with President Nicos Anastasiades and Foreign Minister Nicos Christodoulides who greeted him at the entrance.

Speaking after the meeting with Anastasiades, Pompeo said US President Donald Trump had spoken to Turkish President Tayyip Erdogan and Greek Prime Minister Kyriacos Mitsotakis about the increased tensions in the region.

“Countries in the region need to resolve disagreements including on security and energy resource and maritime issues diplomatically and peacefully,” Pompeo said. “Increased military tensions help no one but adversaries who would like to see division in transatlantic unity.”

“Cooperation in security is becoming more important in the area.  The Eastern Mediterranean has the ability to bring together many countries and create new markets through energy. The energy resources will be shared between both the Greek Cypriots and Turkish Cypriots,” he added.

He added that the two countries share the same values, pointing out that “our relationship has never been better and I am proud of that”.

During the joint statements, Anastasiades told Pompeo his visit came during a period of very important developments in the Eastern Mediterranean as Turkey was conducting illegal activities in the region.

“I informed the State Secretary of our readiness for the delimitation of our maritime zones north and west of Cyprus with Turkey, either through bilateral negotiations or by recourse to the International Court of Justice,” the president added.

He said he had also briefed Pompeo on the situation in Varosha and the developments on the Cyprus issue.

“As we have discussed, these unlawful activities, despite repeated calls on Ankara to refrain from provocative actions, should be immediately terminated,” the president said.

He expressed his deep appreciation to the US government for its firm stance on condemning Turkey’s illegal drillings in Cyprus’ EEZ in full support to the unhindered exercise by Cyprus of its sovereign rights to explore and exploit its natural resources.

“I also conveyed our full support to the US position that any disputes in the Eastern Mediterranean should be resolved through dialogue and not by gun-boat diplomacy,” the president said.

The two foreign ministers also signed a Memorandum of Understanding for further cooperation on defence issues. “It will help to develop our relations further, and secure borders,” Pompeo said.

The Memorandum was signed in the framework of the bilateral co-operation between the Republic of Cyprus and the United States in the security and defence realm, in order to establish a training facility, in Larnaca, which will be named “Cyprus Centre for Land, Open Seas and Port Security” (CYCLOPS).

“This will be a Cyprus-owned facility, which already has secured an initial funding sum by the US government for the purpose of establishing and operating it,” a statement from the palace said.

This initiate falls under the scope of the Statement of Intent which was signed between the two governments in November of 2018.

CYCLOPS is a partnership programme, with the US offering expertise and technical equipment, while also contributing in training programs of Cypriot experts and officials, with the ultimate aim of gaining the necessary expertise to become trainers themselves for programnes which will be on offer to their counterparts from like-minded countries, mainly from the region.

These programmes will be in such security-related fields as the handling and storage of dangerous chemical/biological/radiological material, port security, border control and cybersecurity.

Cyprus will offer the plot of land where the Centre will be built and its related infrastructure.  The location has already been identified in Larnaca, in the greater vicinity of its international airport.

Earlier, the defence ministry announced the Cypriot National Guard was participating in a joint exercise with the US navy special forces from Saturday until September 20. The defence ministry announced that the exercises come under bilateral relations between Cyprus and the US and concern, in particular, cooperation on logistics and navigation issues.

Pompeo had travelled from Larnaca airport by motorcade and arrived just after 9pm. Police closed a number of roads in Larnaca and Nicosia to allow for unimpeded travel but did not announce details beforehand for security reasons. A helicopter also hovered over the area.

He was accompanied by US ambassador Judith Garber and heavy security. Inside the palace he was greeted by the president and sat immediately for talks without the usual pomp and ceremony that goes with high-profile visits. The meeting was over and statements made by 10pm.

Turkish Cypriot leader Mustafa Akinci said earlier it was wrong of Pompeo to not meet with him during his visit to Cyprus.

According to Akinci’s spokesman Baris Burcu, the Turkish Cypriot leader told the US ambassador over the phone that Pompeo should have sought a meeting with him, just as former secretary of state John Kerry did during his visit to the island in late 2015.

Burcu said the ambassador offered Akinci a phone call with Pompeo but the former rejected the option as it was ‘insufficient and inappropriate’.  Garber told Akinci, Pompeo would be unable to meet with him due to time constraints, Burcu said.

“The problems in the Eastern Mediterranean cannot be helped by only meeting with the Greek Cypriot side and obtaining unilateral information,” Burcu added.

Akinci was also sidelined by top EU diplomatic envoy Josep Borrell during his visit to Cyprus in June.  The Turkish Cypriot leader also expressed his dissatisfaction at the time over a phone call he had with Borrell, following the visit.