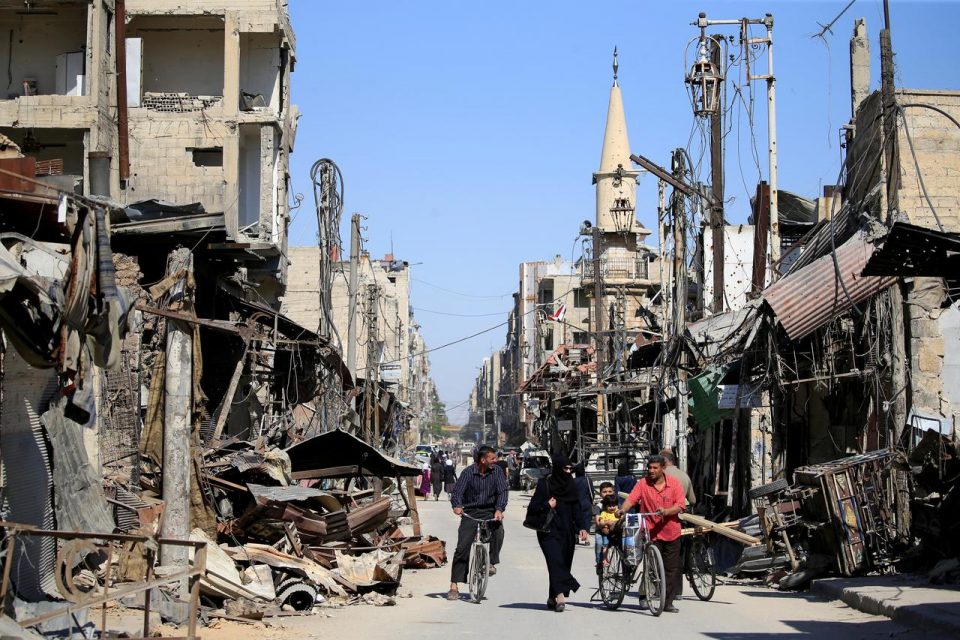 When Syrian oppositionists first took to the streets nine years ago to demand change, few of them likely expected that in 2020, their war-ravaged country would still be enduring conflict, economic deprivation and authoritarian rule.

These zones of control are themselves deeply fragmented, too, with tribal forces, irregular militias and a resurgent Islamic State all battling for control.

At the same time, the economy is in a downward spiral, with the prices of food, medicines and fuel rocketing – particularly in previously-stable, government-controlled areas.

On top of all this, too, is the spectre of Covid-19, which is ravaging indiscriminately, taking advantage of an exhausted population and shattered health systems.

Yet, despite this alarming list of horrors, there seems little prospect of a solution any time soon.

“There is a major lack of Syrian political vision,” Nawar Shabam, Conflict Analyst at the Omran Centre in Istanbul, told Cyprus Mail, “as all the local forces are now implementing the plans of their international backers.”

Indeed, Russia, Iran, Turkey and the US now hold all the cards for Syria’s future, while many of the country’s long-suffering inhabitants find themselves encircled in a perilous and tragic inferno.

“It is no longer really a conflict between the different Syrian authorities – the regime, the Kurds or the opposition,” Zaki Mehchy, Syrian expert with the Conflict Research Programme at the London School of Economics, told Cyprus Mail. “It’s a fight between their international supporters.”

The largest area – around 65 per cent of the country’s territory ­– is held by the government of President Bashar Al Assad, backed by Russia and Iran.

Then there is the territory in the north-east – around 25-30 per cent – controlled by the largely Kurdish Syrian Democratic Forces (SDF), backed by the US and other Western countries, such as France.

Finally, there is the area in the north-west – around 10 per cent – controlled by the remnants of the opposition. This is backed principally by Turkey, but with Gulf states such as Saudi Arabia and the UAE also influential amongst Islamist opposition groups.

These territories have remained fairly constant since the end of major fighting around the opposition north-western enclave of Idlib, back in March.

Yet, “It is wrong to say that things are stable,” says Shabam. “Within these areas, you have a range of militias, unofficial groups and authorities, tribal forces and others competing for control.”

Opposition territory is split between areas ruled by the Turkish army and its allies, and those controlled by the jihadist Hayat Tahrir al-Sham (HTS) – designated a terrorist group by the US – which has grown particularly strong in the opposition enclave of Idlib.

The Kurdish region has seen a resurgent IS in recent times, which has also tried to leverage disputes between the SDF and local Arab tribes.

In the regime-controlled areas, too, militias backed by Shiite Muslim Iran have also been a source of local conflict with Sunni and other religious groups.

In addition, in the government-controlled areas, “There has been rising tension recently, with groups known for being pro-government also starting to protest against the government,” Sara Kayyali, Syria researcher with Human Rights Watch, told Cyprus Mail.

The reason for this is a stark one: “The economy is in free-fall,” Kayyali adds. “People simply don’t have enough money for food and shelter.”

Indeed, while prices of most basic commodities in government areas have gone up some 30 times since the start of the conflict, “half of that increase has happened in the last eight months”, says Mehchy.

Behind this lies a combination of wartime deprivation and international sanctions ­– with these recently strengthened by the recent US Caesar Act. This places sanctions on regime figures and third parties doing business with them.

“This has had a major chilling effect on anyone who might be thinking of investing in Syria, even if they are not US allies themselves,” says Kayyali.

While this has made life difficult across the board – there has been a thirty-fold increase in those considered ‘food insecure’ by the World Food Programme – the Covid-19 health emergency has added even greater difficulty.

“Covid is spreading like wildfire,” says Kayyali, “but there is no money for medicines or PPE equipment.”

The government is also widely believed to be concealing the true numbers of those infected.

“There is a political consequence of all this,” says Mehchy: “More social unrest and more violence.

The gravity of the economic situation in the government areas was further illustrated by Russian Foreign Minister Sergei Lavrov’s visit to Damascus last Wednesday, just before he came to Cyprus.

He was accompanied in Damascus by Deputy Prime Minister Yuri Borisov, who announced that a new economic pact would be signed by the end of the year. This, he said, would provide relief from the US sanctions Borisov said were “strangling the Syrian people”.

For Assad, this Russian support remains vital, yet comes with an increasingly heavy price.

“Assad has shown himself to be good at securing Russian interests,” says Shaban.

These include control of the Mediterranean port of Tartus – leased to Moscow for 49 years – and Russian control over oil and gas exploration offshore.

Meanwhile, a US company has signed an oil and gas deal with the SDF, while Iran has also been pursuing an economic agenda in the government-controlled regions.

Turkey, however, is perhaps the most advanced in providing support in its Syrian possessions.

“Turkey has invested in its areas in a major way,” says Shaban.

This has included a major programme of investment in telecoms, power and water supply in Turkish controlled areas. In these, there has also been a shift to the Turkish currency, the lira, which also helps with foreign currency issues caused by sanctions and the collapse in the Syrian pound.

“In Idlib,” adds Shaban, “Turkey used to have 12 observation posts. Now they have 64 military bases. I don’t think the Turks are thinking of leaving any time soon.”

SEARCH FOR A SOLUTION

For many Syrians, though, the level of foreign intervention in their country is part of the problem, rather than the solution.

“Turkey and other external actors have played a hugely negative role in Syria’s uprising,” says Mehchy. “It and other countries militarised the protests, turning them into a civil war. Now, all the different parties – the regime, the Kurds, the HTS – they are all authoritarian, anti-democratic and anti-human rights.”

Finding a way out of this has so far proved elusive, with the different interests of the international players now likely having to be reconciled if any progress is to be made.

“I fear, too, that such a ‘solution’ would not address any of the core social, economic and political issues that sparked the whole uprising in the first place,” adds Mehchy.

For many Syrians, then, facing a pandemic amidst rising poverty and continued conflict, there are many circles to this particular hell.

Euro gains as ECB shows no focus on strong currency