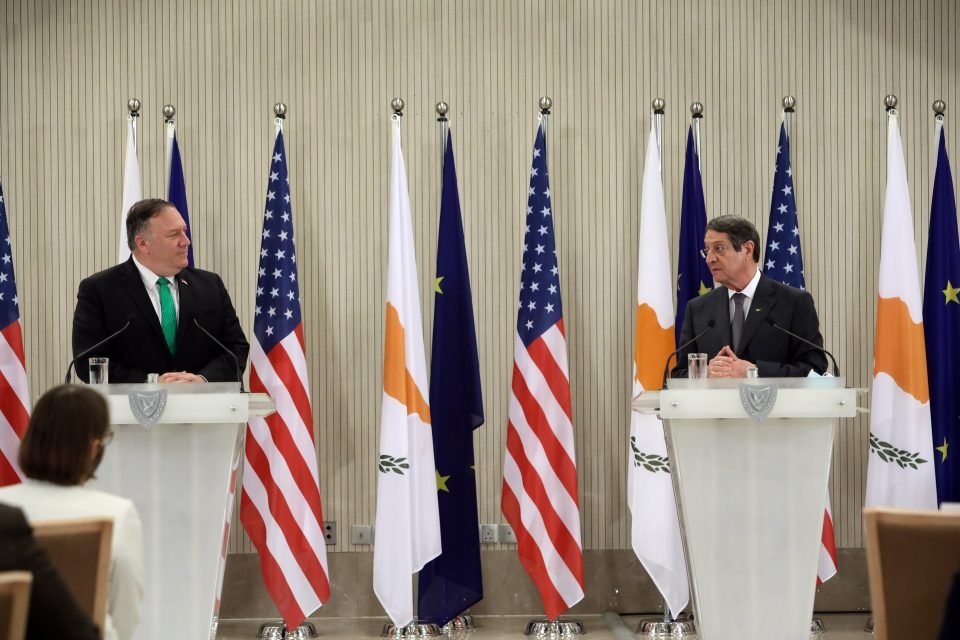 Greek Cypriot political parties on Sunday welcomed the visit of US Secretary of State Mike Pompeo on Saturday night, some more enthusiastically than others.

Main opposition communist Akel said Pompeo’s statements did not add anything new about the US positions with regards to the region.

“The dangerous situation in the region, caused by Turkey’s illegal and provocative actions, calls for intensified efforts to de-escalate and promote dialogue to find solutions to problems, including the Cyprus issue on the basis of international law and relevant resolutions of the UN,” said party spokesman Stefanos Stefanou.

“The USA must also work in this direction, which will certainly be judged – like everyone else – by their actions and not by their declarations.”

At the same time, he said Pompeo reiterated his country’s “unacceptable demand” that Cyprus sever its relations with a permanent member of the UN Security Council, the Russian Federation, “to serve selfish and aggressive US plans in the region, something that, if done, will have catastrophic consequences for the vital interests of our country”.

“It would be interesting to know what was the response of the President of the Republic to this US demand.”

Ruling Disy in a statement said the visit showed that Cyprus had built strong strong alliances on the basis of a positive agenda with substantial results.

“In this context, all the threats and illegal actions of Turkey against our country and against Greece, can not be accepted, as was clearly stated yesterday by Mr Pompeo,” party spokesman Demetris Demetriou said.

“The fair settlement of the Cyprus problem, the respect of the UN resolutions on Famagusta, the right of our country to exploit its natural resources, have a common basis that must be accepted by Turkey… international law.”

The main recipient of the message from the Pompeo visit was Turkey, “which must realise the impasse it has chosen,” he said.

Socialist Edek was less than enthusiastic, criticising Pompeo for what it called the “equal distance policy” that avoided condemning Turkey’s illegal actions in Cyprus’ EEZ and in and around Greek waters. Athens and Ankara are Nato allies, which sees the US as a rule sticking with Nato solidarity principles.

Edek acknowledged that Pompeo had referred to Washington’s deep concern about Turkey’s ongoing activities in the region but the US official had avoided “condemning Turkish actions and calling on them to stop”.

However, the party welcomed Pompeo’s statement that Cyprus and Greece have the right to exploit the natural resources in their respective jurisdictions.

“His choice NOT to talk about Varosha is also noteworthy,” the party added, saying that President Nicos Anastasiades had asked the US some time ago to take a precautionary stance on Turkey’s plans to resettle the fenced-off area in Famagusta.

“On the positive side, the US Secretary of State did not go to the occupied areas to meet with the occupation leader despite complaints from the latter,” the party concluded.

Eleni Theocharous, leader of the Solidarity party took a harder line, suggesting that Cyprus was now under US control as she ran through everything wrong with the visit, from Pompeo’s comments on the Cyprus issue to his reference that the island’s natural wealth be shared among the two communities.

She also referred to the creation of a joint US-Cyprus security training centre in Larnaca called Cyclops, which Pompeo announced, saying Washington at the same time was imposing its position that Russian ships be banned from Cyprus.

“It was indeed imperial [of Pompeo] to visit his grateful citizens,” she said.

The Citizens Alliance party of Giorgos Lillikas welcomed Pompeo’s statements, saying it was important at a time when Turkey was stepping up its provocative actions in the region.

“We emphasise however, that any contacts should be made within the framework of mutual respect and sincere efforts in the direction of confronting the Turkish aggression, without asking for disproportionate compromises from the Republic of Cyprus,” the party said.

“We are particularly concerned about statements by the US Secretary of State at the end of his contacts in Cyprus, where, according to Reuters, the US has been pushing for an end to the facilities that Cyprus sometimes offers to Russian ships. We can not afford to lose old strong friends in the [UN] Security Council.”