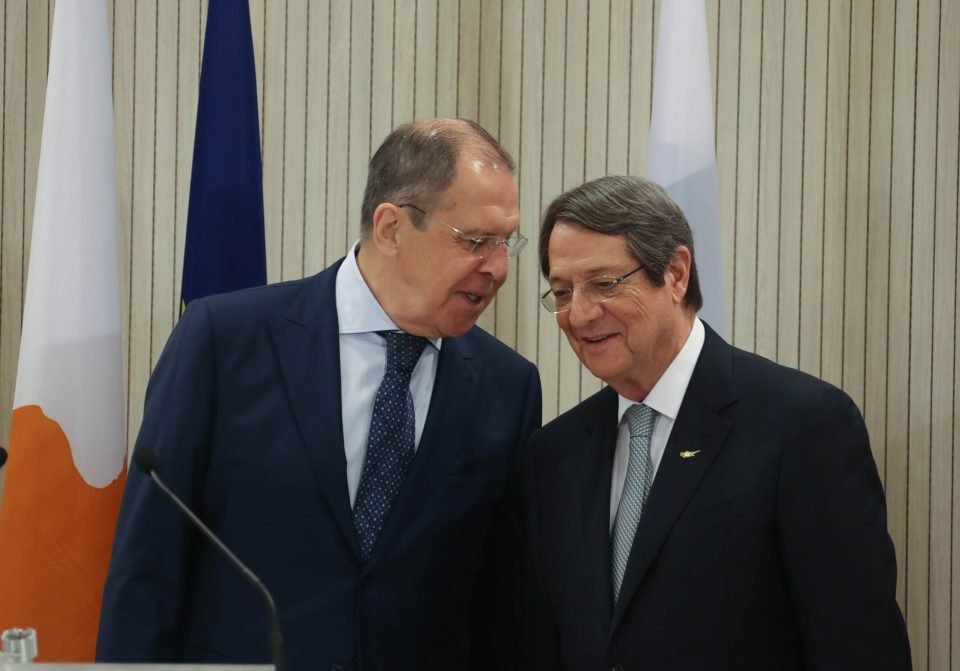 Aftermath of the visit of the Russian foreign minister

In the course of his recent visit to Cyprus, Sergey Lavrov, the Russian foreign minister, stressed that his country is ready to contribute to the development of a genuine dialogue aiming at the resolution of the Cyprus problem.

Welcoming the minister, President Anastasiades said: “Your presence here is, indeed, a reaffirmation of your adherence to the timeless values and principles that are reflected in the United Nations charter … I wish to warmly thank you for consistently defending the independence and the territorial integrity of the Republic of Cyprus but also for your support of our efforts to resolve the Cyprus problem peacefully.”

He added: “We are very concerned that a faraway country – the United States of America – is striving to turn the countries of this region against each other and to promote and to force everybody to accept the notion that ‘whoever is not on our side, is against us’. Compromising and finding a balance between conflicting interests is the only way of settling disputes.”

And referring to the Cyprus problem, he said Russia supported the implementation of the UN resolutions for resuming and hopefully concluding negotiations.

That both Russia and the US seek to serve their own interests is logical and anticipated. That Russia systematically seeks to cultivate the impression in Cyprus that it is fighting for the Cypriot people is also logical and anticipated. What I fail to understand is the readiness of the Greek Cypriot leaders to believe this Russian myth, when the hard facts point in a diametrically opposite direction. Let us look at the facts in an orderly fashion.

In 1964, with the intervention of President Lyndon Johnson, the then threatened Turkish invasion was averted. George Ball, US Deputy Foreign Minister, in his memoirs published in 1982, writes: “The crisis subsided. Pressed by America and the United Nations and denied aid by the Soviets [my emphasis], Makarios’ position was weakened, particularly with General Grivas challenging his hold over the island … Thus, the 1964 US venture into crisis management can be judged a success. …  It staved off a Turkish invasion of Cyprus.”

In 1974, the Turkish invasion that was averted 10 years earlier materialised. It came at a time when the US was ungovernable – Richard Nixon, resigned on August 9, that is between the first and second phase of the invasion. As to Russia’s role in averting the invasion 1974, Glafcos Clerides, in his memoirs, could not be more explicit. “I had to examine our alternative options, which could help us prevent the Turkish advance. I felt the need to explore the intentions of the Soviet Union. I called the Russian ambassador, Mr Sergei Astavin, to my office and begged him to convey to his government my request for a Soviet intervention, while stating clearly that I was prepared to allot Cyprus territory for setting up a Soviet base. I also explained to him that, in my view, the presence of some Soviet troops in Cyprus would have constituted an adequate deterrent preventing Turkey from further expanding its occupation of Cyprus. The ambassador listened in silence, without commenting and without seeking any clarification and simply said that he would ensure that my request would be promptly conveyed to his government and would advise me of the response. The response, which was delivered by the ambassador shortly before my departure for Geneva, was that the Soviet Union would be prepared to intervene only in consultation with the United States [my emphasis].

In November 1978, the US, Britain and Canada tabled the Anglo-American-Canadian plan, which stipulated the return of substantial areas of land, acceptance of a limited number of settlers, the possibility of the return of all refugees who had not permanently settled elsewhere and the immediate return of Famagusta. At that stage, Astavin invited the members of the Akel secretariat and certain members of its political bureau to his home to direct them towards rejecting the plan, while Tass, the Soviet news agency, described the plan as a Nato intervention in Cyprus’ affairs. Akel duly rejected the plan, despite its initial positive reaction (as confirmed by Andreas Fantis, Akel’s assistant general secretary) and even though Clerides, Foreign Minister Nicos Rolandis and the Greek government all supported it.

Then came the Annan plan, which – again – was initially supported by Akel but was subsequently followed by the celebrated “we say ‘No’, to cement ‘Yes’. This followed the negative stand taken by Russia and the meeting of the Cypriot Foreign Minister Giorgos Iacovou with high-ranking government officials in Moscow that led to Russia’s veto at the UN Security Council and frustrated the efforts to strengthen the proper implementation of the plan.

Thus, for the past 60 years we have heard about the continuous and substantial support that Cyprus receives from Russia, but it is always confined to inexpensive declarations of general principles, to statements empty of any substantive content and actions directed against Nato and the US. It is well-known that Russia supports “a just, viable and workable” solution of the Cyprus problem. All those involved in the process are seeking such a solution, but each one understands these words to mean something entirely different. On this basis everybody is kept happy!

Small Cyprus has a culture and an economic and social infrastructure that are aligned to the western world and it is, indeed, for this reason that we sought and secured membership of the EU, with its democratic traditions and its liberal ideals. A “multi-dimensional” foreign policy, including the provision of “humanitarian support” to Russian military vessels, is a Makarios legacy that has never worked. On the contrary, it has led us into troubles and turmoil that have cost us dearly.