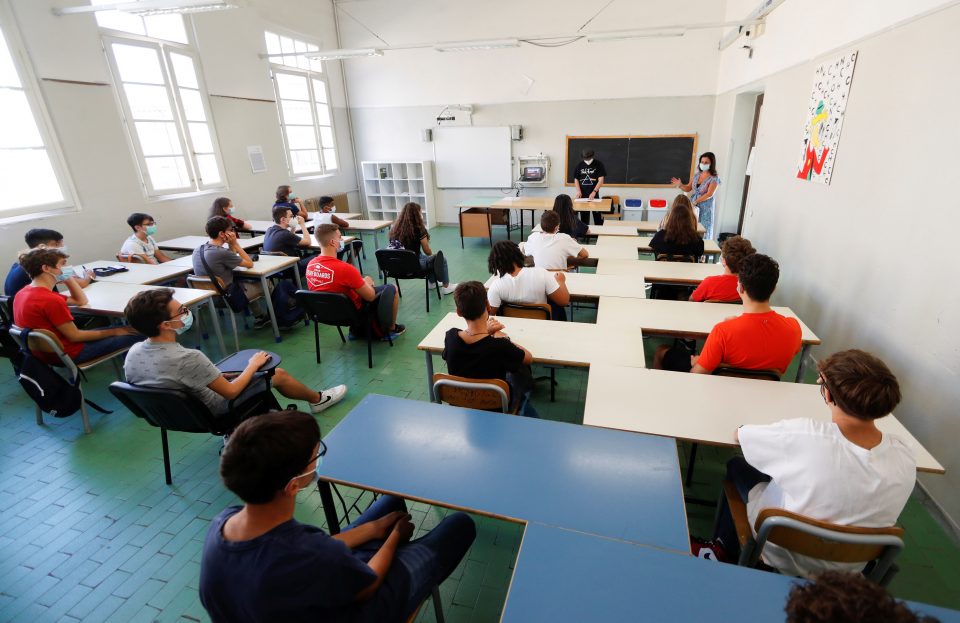 After a six-month shutdown, the longest in Europe, Italy reopened most of its schools on Monday, testing the organisational skills of the government, the nerves of teachers and the self-control of excited students.

Schools in 13 of the country’s 20 regions cautiously resumed face-to-face lessons, calling back 5.6 million students to their desks. The remaining seven regions have decided to delay for another week.

“There is a huge sense of excitement both on the part of us teachers and the children. We are very happy to see each other again, but it is also a struggle not to get too close,” said Patrizia Zucchetta, a primary school teacher in Rome.

Battling to halt the spread of coronavirus, the government shut the nation’s schools in early March. Efforts to make classrooms safe again and limit the possibility of fresh contagion have been mired in controversy.

“At the beginning there are going to be problems,” Prime Minister Giuseppe Conte acknowledged on Sunday.

Many of the new 2.4 million single desks needed to guarantee social distancing, have failed to arrive in time, unions say, while thousands of teaching positions remain vacant and older staffers have expressed concerns about the risks they face.

The Organisation for Economic Cooperation and Development (OECD) says 59% of all Italy’s primary and secondary school teachers are aged over 50 – the highest in the Western world – making the education system vulnerable to infections.

In Italy, about 35,500 people have died of COVID-19, the largest death toll in the European Union, and the number of new cases has picked up recently raising fears of a second wave.

“We are following the security protocols, but there is fear and above all uncertainty about how the year will proceed. Many teachers are very anxious,” said Alessandro Capata, deputy-head of Rome’s Avogadro secondary school.

Parents also expressed doubts about the coming months. Schools say children with the slightest symptoms of a cold or fever must stay home. Pupils aged six and above have to wear masks outside their classrooms and should avoid physical contact.

“I have explained to the children to avoid contact, kisses and hugs, but I don’t want them to live in terror because I don’t think they need to,” said Claudia Costantini, the mother of two primary school children.

“You have to make them understand things will get better.”

Wearing masks and trying to keep a safe distance, more than a million pupils returned to schools across Portugal on Monday, a long-awaited moment for many after students were forced in March to learn remotely due to the coronavirus pandemic.

At the Maria Amalia high school in Lisbon teenagers were called into the classroom one by one and asked to disinfect their hands, while windows were left open.

Standing next to her son as they waited outside, Alexandra Borges said she feared there would be new infections at school but going back to in-person classes was essential for pupils of all ages, including her son Pedro, who brought hand sanitizer inside his backpack.

“It was a little hard because I have a son with special needs which makes things even more complicated,” she said of the home-schooling period. “There were various kids who were depressed, full of desire to go back to school.”

Portugal ordered schools, kindergartens and universities to close in mid-March when a lockdown was imposed to fight the spread of the coronavirus. Classes were replaced with online lessons and daily TV broadcasts of various subjects.

“It was hard on everyone because all of a sudden, without expecting it, we had to stay home,” said Fatima Lopes, principal at the Maria Amalia school.

“We are all trying to do better,” Lopes said. “I doubt we can do it in an exemplary way right from the beginning.”

The number of daily infections has increased in Portugal since the end of the lockdown and is now around the levels last seen in April.

Chemistry teacher Helena Teixeira said one of the biggest challenges will be being unable to stand close to her students and give them personalised support.

“It will be a very serious problem,” Teixeira said as her students sat quietly behind her. “(But) I’m always happy to be with them.”