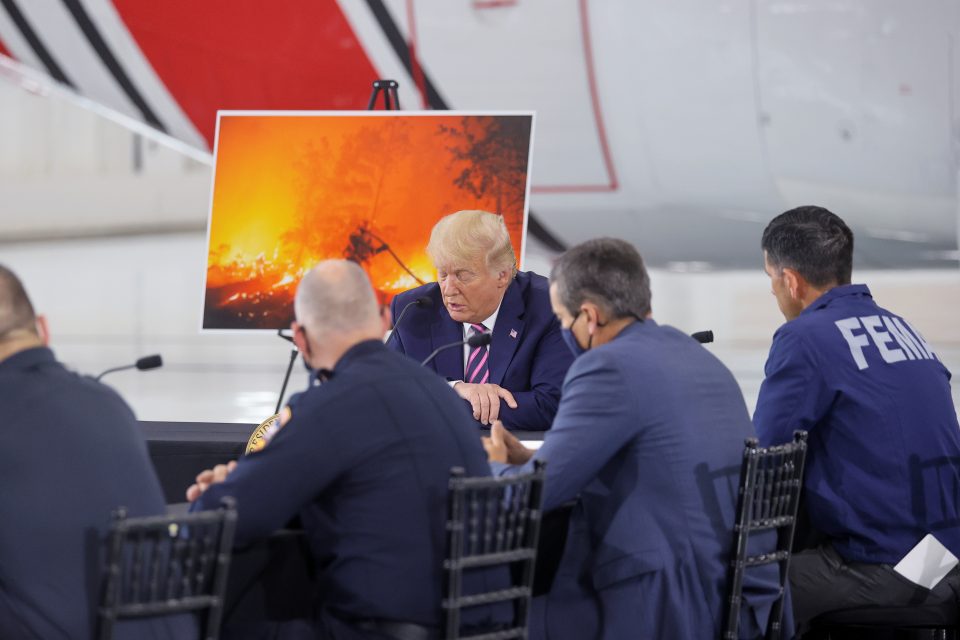 T he wildfires sweeping the west coast states assumed center stage on Monday in the U.S. election campaign, with President Donald Trump visiting California after blaming the blazes on poor forest management and his Democratic challenger, Joe Biden, stressing the role of climate change in stoking the fires.

The Republican president, seeking re-election on Nov. 3, is due to meet with firefighters and emergency officials in Northern California. Democrats have blasted Trump for remaining mostly silent about the largest wildfires in state history, except for his efforts to blame the blazes on failures by the state government.

Biden, slammed by Republicans for failing to visit disaster areas, spoke from his home state of Delaware on the threat of extreme weather that climate scientists have said is supercharging fires.

“Forest management in California is very important, and now it extends to Washington and extends also to Oregon. There has to be good, strong forest management, which I’ve been talking about for three years with the states,” Trump said after landing in McLellan Park, California.

A blitz of wildfires across Oregon, California and Washington state has destroyed thousands of homes and a half dozen small towns since August, scorching more than 4 million acres (1.6 million hectares) and killing more than two dozen people.

Drone footage showed hundreds of homes reduced to ashes in the southern Oregon communities of Phoenix and Talent, around 5 miles (8 km) south of Medford last week, after a wind-driven firestorm raced north, blowing embers into trailer parks and residential subdivisions.

Trump, who pulled the United States out of the Paris accord that laid out an international approach to combat climate change, has authorized federal disaster aid for both California and Oregon.

Trump’s administration has waged a series of legal battles with Democratic-run California, the most populous U.S. state, on a variety of issues including immigration and environmental policy. The state for its part has sued his administration more than 100 times. Trump lost badly in California in the 2016 election and is expected to fare poorly there this year as well.

The president and his administration have sought to pin the blame for the large wildfires on state officials, saying fuel-choked forests and scrub need to be thinned and “raked.”

Biden has blamed human-caused higher average temperatures in U.S. West coast states for the wildfires and included climate change in his list of major crises facing the United States, along with the coronavirus pandemic.

Calling Trump a “climate arsonist,” Biden said, “If we have four more years of Trump’s climate denial, how many suburbs will be burned by wildfires? How many suburban neighborhoods will have been flooded out,” he said.

Biden was referring to Trump’s focus on suburban voters, saying Biden would bring chaos to them by changing policy on low-income housing. Trump has struck a “law and order” theme in the wake of anti-racism protests.

In Clackamas County south of Portland, Oregon relief crews dished out food to some of the tens of thousands of residents ordered to evacuate. These residents faced the added challenge of gaining food and shelter during a pandemic.

“We want to make sure that everybody maintains social distance as much as possible,” said Jeremy Van Keuren, community resilience manager at the Portland Bureau of Emergency Management.

To the south around Phoenix and Talent, some locals set up food stations in parking lots while others guarded homes from looters who tend to appear at dusk, according to a Reuters photographer.

A man was charged with arson on Friday for starting the blaze that burned towns and another man was arrested in Portland on Monday after he started six small fires that did not burn any structures, Portland police reported.

Oregon emergency officials worried that the shifting weather might bring increased winds after fires killed at least 10 people, with dozens of people missing, according to Oregon Governor Kate Brown.

Thick smoke and ash from the fires have darkened skies over the West Coast for a week, creating some of the world’s worst air-quality levels.

As the smoke that has been clogging the air and blocking heat from the sun begins to lift, California firefighters expected the weather to heat up and fire activity to possibly increase, the state’s fire authority Cal Fire said.

More than 4,000 homes and other structures have been incinerated in California alone over the past three weeks. About 3 million acres (1.2 million hectares) of land, an area approaching the size of Connecticut, have been burned in the state, according to Cal Fire.