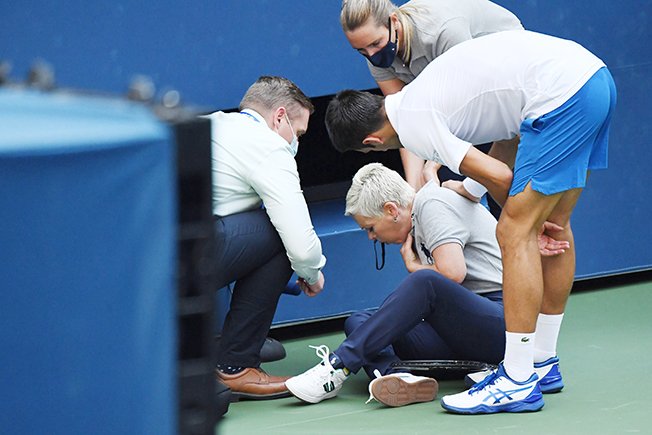 World number one Novak Djokovic says he cannot guarantee he will not make a similar mistake that led to his disqualification at the U.S. Open for striking a line judge with a ball but he remains confident it will not affect his tennis in the future.

The Serb was disqualified in the fourth round in New York when he hit a ball in frustration after dropping serve in the first set against Spain’s Pablo Carreno Busta, hitting line judge Laura Clark in her throat and causing her to fall to the floor.

Djokovic, who had already apologised for the incident, said that he called on the lineswoman to check on her health since the incident at Flushing Meadows.

“I cannot promise or cannot guarantee that I will never ever do anything similar to that in my life,” Djokovic told a news conference at the Italian Open on Monday.

“I’m going to take this in as profound as possible for me as a big lesson.”

Following the incident, the tournament organisers confirmed Djokovic was fined $250,000 — his prize money for reaching round four. The 33-year-old was also fined an additional $10,000 for unsportsmanlike conduct.

“There was a lot of speculation about whether it was deserved. I accepted it, I moved on,” Djokovic added. “Of course I didn’t forget about it, I don’t think I’ll ever forget about it.”

In Djokovic’s absence, Austria’s second-seeded Dominic Thiem claimed his maiden Grand Slam title in New York after he came back from two sets down to beat German Alexander Zverev in the final on Sunday.

“I watched the final last night until the end of the fourth set. You know, I want to congratulate both of these guys,” Djokovic said.

“For Dominic to lose three (slam) finals and start the match not on a very high level but then come back and win in such fashion is very inspiring.”

The disqualification, however, gave Djokovic more time to regroup before his claycourt opener at this week’s Italian Open — a tune-up for the French Open starting Sept. 27.

“It’s great I have a tournament a week or 10 days after it happened because I feel the earlier I get back in competition mode the faster I’ll overcome the memory and reprogramme it. I’m hoping for the best,” said the 17-times Grand Slam winner.

Rafa Nadal, bidding for a record-extending 13th French Open title, is returning after more than six months on Tour having skipped the U.S. Open due to COVID-19 concerns.

“For the guys who are playing U.S. Open, it’s very close, very tight after an exhausting month of tennis in the States on different surfaces,” said Djokovic. “Rafa obviously decided to stay on clay and practice.

“I mean, surely that gives him more advantage, but even if he didn’t practice for that long on clay, he would still be the number one favourite in Roland Garros or any other clay tournament… he’s the ultimate challenge.”