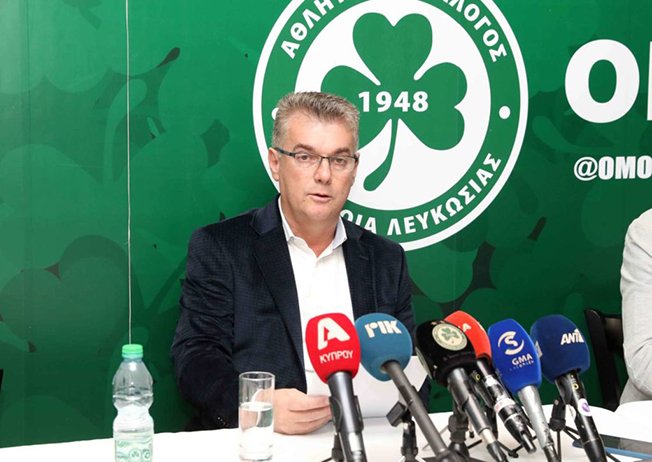 For the second time this year, Omonia president Stavros Papastavrou has made the headlines with controversial comments made on Monday night’s TV programme ‘Total Green’ that was aired by Primtel.

His latest outburst centred around Omonia’s weekend game against Anorthosis, where he launched a stinging attack on the Famagusta club and more specifically its president Evgenios Chamboullas.

He called on the club’s chairman, Christos Poullaides, to question whether Chamboullas is fit enough to represent such a historic club.

According to media reports Chamboullas and Omonia’s vice president Demetris Gregori had a heated exchange at the interval of their game, with Gregori reporting Chamboullas to the police for physical as well as a verbal assault.

Chamboullas though was not the only Anorthosis official Papastavrou ‘attacked’. He also felt the need to indicate to their coach, Temur Ketsbaia, what he should say during the post-game press conference and finished off his reference to Katsbaia saying “any coach whose team wins such a soft penalty should stop talking and move on.”

However, Papastavrou left the best until last.

When asked about Ouzoho, the Nigerian international goalkeeper who Omonia tried to sign this summer from Spanish side Deportive La Coruna, he accused Costas Christodoulou, the player’s agent (and Doxa Katokopia’s president), of telling him that they can sign the player by paying La Coruna 200,000 euros as well as another 200,000 euros to him in ‘black money’.

He also asked the Cyprus Football Association (CFA) to clarify if Christodoulou is a club president, a player’s agent or someone who launders money.

Christodoulou hit back at the accusations and said that the only reason why Omonia’s president said these things was to appease the Omonia supporters for failing to sign Ouzoho.

“This is not the first time Mr Papastavrou makes such baseless accusations and this behaviour will be at a cost this time,” Chrisodoulou said.

Christodoulou was referring to statements made at the beginning of the year when the Omonia president accused the CFA of corruption offering rewards from 5,000 to 25.000 euros to anyone who would provide details to back up his claim. He even said that his team would create a website where they will regularly publish dodgy mistakes made by referees, “in order to shed light on issues that are preventing our football from growing”.

All reports Papastavrou said, would be given to the attorney-general and to Uefa even though, almost nine months on, it remains unknown if anything has been sent to either.

When asked in May whether he sent a report to Uefa he dodged the question saying “I do not want to comment, we shall wait for certain decisions and then decide how to proceed.”

Papastavrou’s has waged a war on many fronts and it will be interesting to see if he can back up his claims with any solid proof this time round.

Already the president of the Sports Ethics committee Andreas Papacharalambous said the Papastavrou will be asked to substantiate his claims while it is a matter of time before the police take similar action.