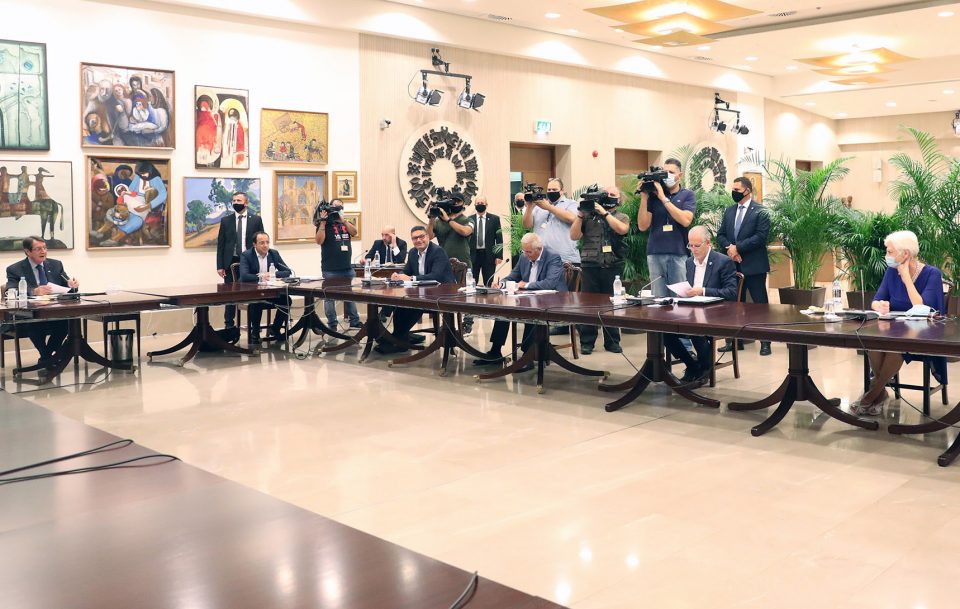 The party leaders at the palace on Tuesday

The president has instructed Finance Minister Constantinos Petrides to hold talks with political parties ahead of drafting the state budget for next year, the government spokesman said on Tuesday.

His comment followed a meeting at the presidential palace during which President Nicos Anastasiades briefed party leaders on political developments but also on the effects of the coronavirus crisis on the economy.

“There was a productive discussion on all the issues, and it is with great joy that I have witnessed this meeting held in an excellent climate,” government spokesman Kyriacos Kousios said.

Ruling Disy leader Averof Neophytou said after the meeting the pandemic showed that the Cypriot economy stood on sound foundations.

“We managed to support all the workers in small and medium businesses, and continue the state’s social and development policy, as a result, I repeat, of the proper economic management of recent years,” Neophytou said.

He conceded there would be an increase of public debt and a fiscal deficit, but they were manageable.

“Let us not forget the excellent management that ensured public health, but also the individual health of each Cypriot citizen.”

Diko chairman Nicolas Papadopoulos said that during the meeting he submitted 12 proposals on the economy.

“I hope they are accepted by the government,” he tweeted. “Households and businesses, especially small and medium, need support now.”

The proposals include redistribution of state spending to limit deficits, drawing money from European sources and European programmes, revisiting a scheme for €1.5bn worth of state guarantees for borrowers, a fund for small and medium businesses that will draw EU funds, subsidisation of rents, extension of income subsidies until the first quarter of 2021, and extension of a suspension in loan payments at least for sectors that continue to face problems.