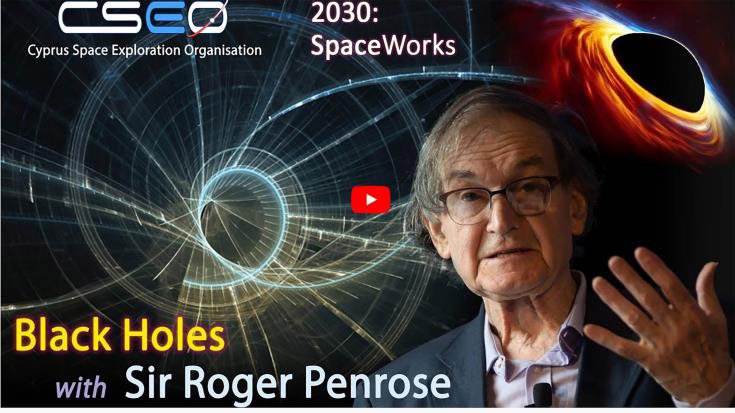 New strong indications that reinforce the theory of the “Conformal Cyclic Cosmology“ (CCC) were presented recently by the founder of the theory, Sir Roger Penrose, British mathematical physicist,  Emeritus Rouse Ball Professor of Mathematics at the University of Oxford.

Sir Roger Penrose was speaking at a live webinar organised by the Cyprus Space Exploration Organisation (CSEO). The webinar was coordinated by CSEO President George Danos.

The bi-weekly series of live webinars titled “2030: SpaceWorks” will host some of the leading scientists on space, astronomy, and cosmology.

Penrose spoke about “Black Holes: Window to a ‘time’ before the Big Bang?” and gave brand new evidence backing its CCC theory about the creation of the Universe.

The CCC theory proposes that the Big Bang was the continuation of the remote future of a previous cosmic “aeon”.

Replying to CNA questions, 89 year old Penrose said that in the CCC model aeons do not coexist, they follow each other one after the other. He also said that CCC does not give an answer as to how many aeons have existed before our time, but said that in theory, cosmic aeons could have always existed and could always exist. The simplest hypothesis is that the aeons continue indefinitely in both directions so they go forever in the past and will continue forever in the future, he pointed out.

The CCC theory says that the universe evolves through cosmic aeons and each aeon ends with the decay of mass and structure.

When this happens, scale also disappears and the infinitely large universe becomes infinitesimal and a new big bang begins.

The transition from one aeon to the other is a smooth one. The only exceptions to this conformal smoothness are the “Hawking points”, these representing the conformally compressed Hawking radiation from supermassive black holes in the previous aeon to ours. He named those points “Hawking points” after his world-famous student and close colleague Stephen Hawking, English theoretical physicist and cosmologist.

According to Penrose, each such black hole would have devoured an entire galactic cluster, before finally decaying away in the form of Hawking radiation, which is then conformally squashed into a single “Hawking point” in the Big Bang of our aeon.

These points are not directly seen, but their energy spreads, throughout 380,000 years before emerging as heated spots.

Penrose presented during the webinar with the Cyprus Space Exploration Organisation brand new evidence that come to enhance his CCC theory.

Asked if intelligent signals could reach us from the other side of the previous aeon, he said that theoretically electromagnetic signals, or neutrino signals could get through and “maybe they have sent us signals, we just have to look at the right places”.

The full interview is at https://www.spaceexploration.org.cy/spaceworks.

Sir Roger Penrose is one of the world`s most prominent theoretical physicists who in 1965 produced the mathematics that showed how stars collapse to form black holes. With Stephen Hawking, he showed that if Albert Einstein`s general theory of relativity is correct, then there would be a singularity, a point of infinite density and space-time curvature, where time has a beginning.

Penrose shared the Wolf Prize for physics with Stephen Hawking for this work on the Penrose-Hawking singularity theorems.

He is also known as the founding father of quantum gravity through his work on twistor theory, which addresses the geometry of space-time. He is an emeritus professor of mathematics at the University of Oxford, and the author of several books about the nature of space, time and reality.

CSEO’s SpaceWorks will continue the series of webinars with a journey to the Moon and Mars and will ask questions on Life in the Universe, protecting our planet, finding resources on asteroids and exploring our solar system and beyond, thus expanding our knowledge and learning how to apply this knowledge to improve life on Earth and protecting our Earth’s fragile ecosystem.

These webinars will be broadcast online for free and are expected to reach tens of thousands of viewers globally.