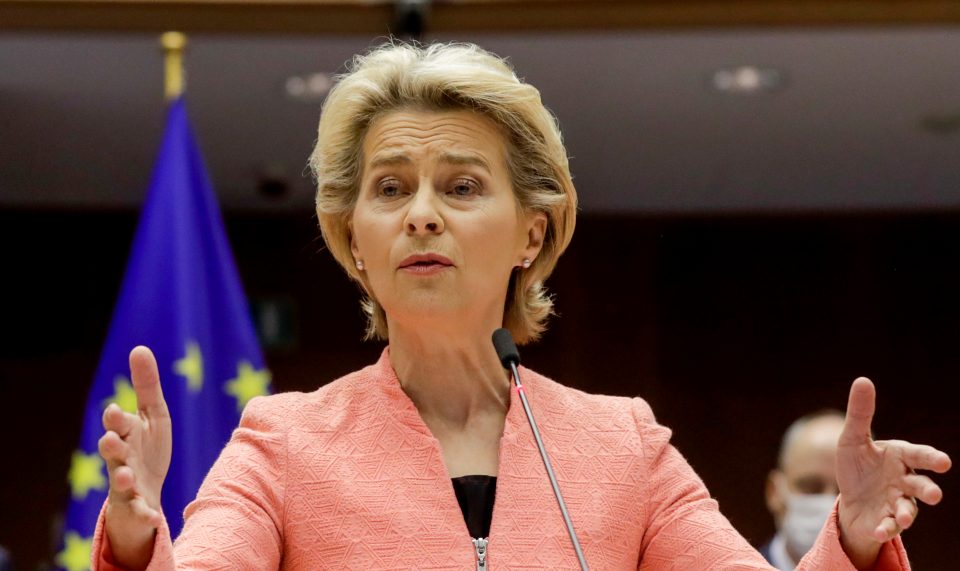 The European Union’s chief executive laid out ambitious goals on Wednesday to ensure that the bloc is more resilient and united to confront futures crises after the coronavirus pandemic, which has plunged Europe into its deepest recession in history.

In her annual State of the Union address, European Commission President Ursula von der Leyen doubled down on the flagship goals she set out on taking office last December: urgent action to combat climate change and a digital revolution.

Von der Leyen, who wants Europe to become the world’s first climate-neutral continent by mid-century, unveiled a plan to cut the EU’s greenhouse gas emissions by at least 55% from 1990 levels by 2030, up from an existing target of 40%. She also pledged to use green bonds to finance those climate goals.

“There is no more urgent need for acceleration than when it comes to the future of our fragile planet,” she said. “While much of the world’s activity froze during lockdowns and shutdowns, the planet continued to get dangerously hotter.”

She acknowledged her proposals would divide member states because the goals will require huge investments in transport, heavy industry and energy, and businesses will also face higher carbon costs under a plan to revamp the EU’s carbon market.

The former German cabinet minister also called for greater investment in technology for Europe to compete more keenly with China and the United States, and said the EU would invest 20% of a 750 billion euro economic recovery fund in digital projects.

Officials said that, far from backing off the plans she laid out at the beginning of her term because of the coronavirus pandemic, von der Leyen believes they remain key to Europe’s long-term economic and political survival.

The EU has been buffeted for years by crises, from the financial meltdown of 2008 to feuds over migration and the protracted saga of Britain’s exit from the bloc.

Solidarity among the 27 member states frayed badly at the onset of the COVID-19 pandemic, when countries refused to share protective medical kit with those worst-affected and closed borders without consultation to prevent the spread of the virus.

The bloc’s leaders also jousted for months over a joint plan to rescue their coronavirus-throttled economies.

But in July they agreed on a stimulus plan that paved the way for the European Commission to raise billions of euros on capital markets on behalf of them all, an unprecedented act of solidarity in almost seven decades of European integration.

“In the last months we have rediscovered the value of what we hold in common,” Von der Leyen said. “We turned fear and division between member states into confidence in our union.”

Turning to the troubled talks with London on the future relationship between the world’s fifth-largest economy and biggest trading bloc, von der Leyen said every passing day reduces chances for sealing a new trade deal.

She stressed that the EU and Britain negotiated and ratified their Brexit divorce deal and warned London the agreement “cannot be unilaterally changed, disregarded or dis-applied”.

That increased the risk of the most damaging, no-deal economic split precipitating at the end of the year.

Chiding EU countries for an ineffective foreign policy, von der Leyen said the bloc must get better at responding to events unfolding around the world.

Once able to boast of a soft power that helped transform communist neighbours into market economies, the EU increasingly finds itself unable to agree common positions on diplomacy because of the need to secure unanimity among member states.

“When member states say Europe is too slow, I say to them ‘be courageous and finally move to qualified majority voting’,” she said. “Be it in Hong Kong, Moscow or Minsk: Europe must take a clear and swift position.”

Greece struggles to bring migrants into temporary camp after fire

Local government workers to down tools for an hour