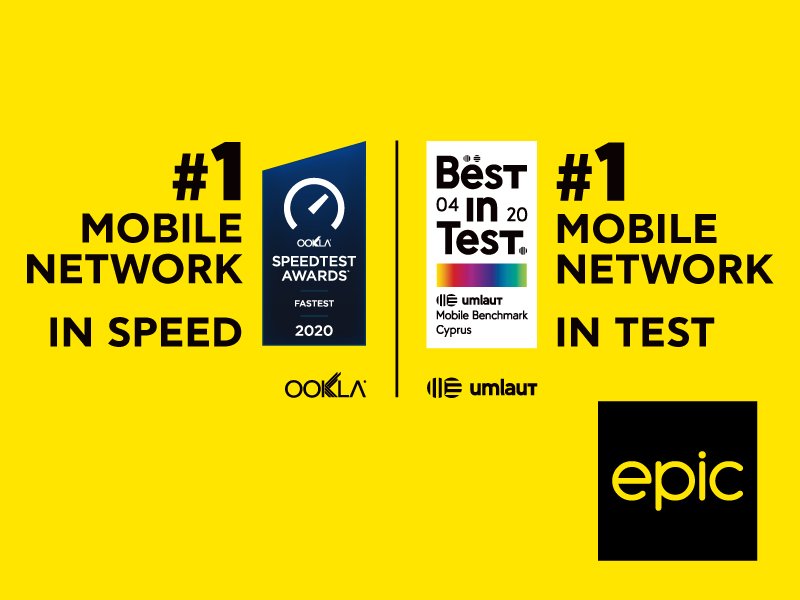 For the first time in Cyprus, a mobile network is awarded simultaneously by 2 reputable organizations, as Epic receives two top distinctions within a year.

Following the “Best Mobile Network in Test” certification by the global independent measurements organization umlaut, which ranked Epic as the No.1 mobile network in Cyprus, the internationally-renowned organization for internet performance testing and analysis, Ookla, has awarded Epic as the “Fastest Mobile Network in Cyprus”, having achieved the highest Speed Score™ and reaching the top in speed far ahead of the competition.

Proven by the results taken with Speedtest®, Ookla has awarded Epic as the “Fastest Mobile Network in Cyprus” for the period of January 1 – June 30, 2020. Ookla Speedtest Awards™ are presented to the top providers in speed who are determined using a Speed Score that incorporates a measure of each provider’s download and upload speed to rank network speed performance.

This award is further proof of Epic staying true to its commitment to provide a great network with inconceivable speeds for its customers throughout Cyprus. Having achieved a Speed Score of 48.82 with recorded average download speeds of 53.70 Mbps and 15.85 Mbps for upload, Epic has proven in practice that it offers an excellent and state-of-the-art network. It is also worth noting that Epic’s average download speeds are reached for the first time, according to Speedtest Intelligence® data and in fact at a period of high demand for telecommunications networks, due to the coronavirus pandemic. These performances have helped rank Cyprus in the 26th place in July’s Speedtest Global Index for Mobile Networks. https://www.speedtest.net/global-index

Epic CEO Thanos Chronopoulos commented: “This year, something unprecedented has happened: Epic’s mobile network is reaching the top twice. Firstly, through the evaluation of umlaut and now with the measurements of Ookla. The fact that two measurement companies with such an international prestige and recognition have certified Epic, is yet another proof that our company continues to be a pioneer in telecommunications in Cyprus and that our continuous investments for the development of a state-of-the-art and extremely fast network were fruitful”.

Υiannis Michaelides, CTIO of Epic, stated: “The recent investments of millions of euros led to the creation of an extremely fast and advanced network with 10 times more capacity and great coverage, aiming at the substantial and practical upgrade of the daily communication experience. Epic’s state-of-the-art, high-speed network is now able to meet the increased traffic and subscribers’ needs in the new digital age, maintaining the highest quality of services. The data speeds currently provided by Epic and verified by Ookla, are significantly higher compared to the same period last year and despite the increased needs of our subscribers this year by about 60%, due to the conditions caused by the coronavirus pandemic. It’s also worth noting that Epic has managed to take the lead in metrics such as data download and upload speeds, as well as latency, as verified by Ookla”.

“Over half a billion users rely on Speedtest to measure their internet performance every year. Ookla analyses these test results to get an unparalleled view into mobile and fixed broadband metrics around the world. It is our pleasure to recognize Epic as the Fastest Mobile Network in Cyprus based on our rigorous analysis. This award is a testament to Epic’s exceptional performance, as experienced by their own customers, in Q1 and Q2,” said Doug Suttles, CEO at Ookla.

Reaching the highest pedestal, Epic enables its subscribers to enjoy seamless communication as well as unparalleled and fast coverage nationwide offered by the No.1 mobile network, fulfilling its commitment to the consumer for a great network and great value.

For more information on the Ookla “Fastest Mobile Network in Cyprus” Speedtest Award, as well as measurement methodology and results, visit www.speedtest.net/awards/epic

Lidl Agias Fylaxeos celebrated one year of operation and handed out iPhones!