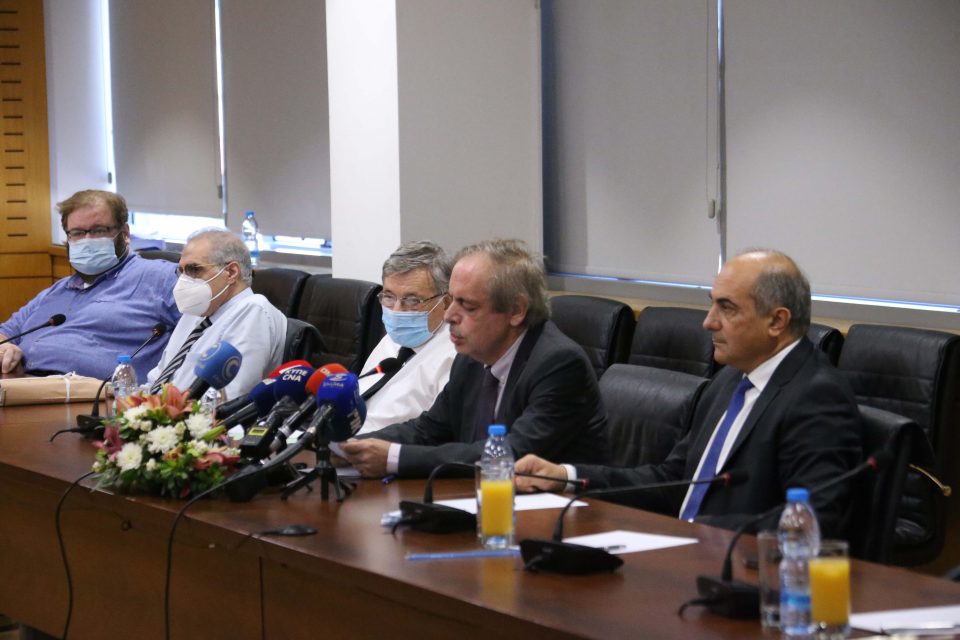 Syllouris (R) Socratous, and the three lawyers during a news conference on Wednesday. Photo Christos Theodorides

Confidential documents relating to the state’s citizenship by investment programme had not been leaked to the media by staff in parliament, its director said on Wednesday, following an internal investigation into the matter.

The documents were leaked to Al Jazeera, which reported late in August that Cyprus had been granting citizenships to shady individuals.

The finger was quickly pointed at parliament, which however, obstructed a police investigation citing constitutional constraints.

Its director, Socratis Socratous said the legislature launched its own internal inquiry into the matter, which concluded that none of the staff were involved in leaking the documents to the broadcaster.

Socratous said the head of the archive suggested that two MP assistants had showed “special interest” and had repeatedly asked to find out whether any names of foreign nationals were included in the documents submitted by the interior ministry.

The assistants had been acting on the instructions of an MP whom Socratous did not name during a news conference.

House president Demetris Syllouris who was also present, refused to disclose the MP’s name or party. He suggested it was up to them to issue a statement if they wanted.

Syllouris said it was one of 18 MPs – party leaders and members of the House interior committee – who had the documents in their possession.

“I don’t know what value this finding has,” he said, adding that he was not saying whether one was guilty or innocent. “But it proves nothing on its own.”

Of the police investigation, Syllouris expressed the legislature’s readiness to assist in the “correct, constitutional way.”

Three legal experts hired by parliament had concluded that the police could not question anyone or request any documents because of parliamentary immunity.

Before that, officers serving a document presentation order had been turned away.

The experts said to do so would entail filing a request at the supreme court to lift the immunity of an MP or MPs.

Obtaining evidence the wrong way could taint the process before a court, if it reached that stage, and those responsible could get away with it, they said.

Socratous said their investigation was conducted between September 7 and September 11, exclusively covering administrative staff and that was why there could not be any safe conclusions regarding MPs.

He said six staff members had access to the confidential documents, himself, his secretary, the committee director, the interior committee clerk, the head of the archives, and an archive staffer.

“Based on the procedure that was implemented (in receiving the documents) and the investigation I carried out, my conclusion is that there was no leak up to the point when the archives handed over the files to the MPs,” Socratous said.

None of the staff members, apart from the head of the archives and the MPs, had the letter published by Al Jazeera, he said.