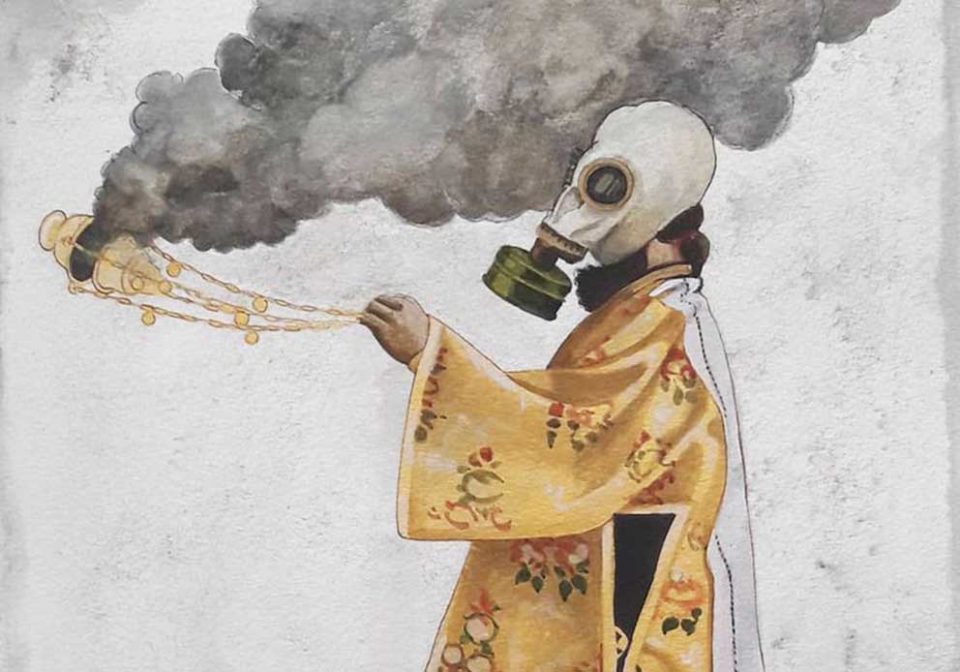 A teacher and artist whose work has offended certain groups of people prompting the ministry to launch a disciplinary inquiry, has failed in his work as an educator, the Archbishopric said on Thursday.

George Gavriel, an art and head teacher at a state high school, has come under fire after releasing some of his latest paintings on social media, which he calls “anti-systemic art.”

Some of his paintings are religion-themed with one depicting a naked Jesus and another a dog urinating on the archbishop. In another, a dog is defecating on a statue of Eoka military leader Georgios Grivas. Some of the paintings have also been branded as sexist and misogynist due to the way he depicts the female body.

“The most important parameter of the issue is that the ‘artist’ in question is an educator – an officer who manages schools in fact,” the Archbishopric said in a written statement.

An educator is not there to simply convey dry and formal knowledge but most importantly, through their personality and example, they should shape the youths’ ethos and deliver them to society with complete personalities who respect themselves and others, the history and customs of their people, the statement said.

“At this point we regret to observe that the educator in question has failed.”

The statement said the Archbishopric never sought to restrict the freedom of expression or anyone’s artistic creation.

However, “in this particular case, we see that with the works in question, the creator overstepped the limits of exercising” those freedoms, clearly offending the rights of others.

The Archbishopric suggested that the educator had sought to cause and measure reactions, clearly trying to appear as anti-systemic and a hero, the victim of a persecution.

“Based on the current social realities though, he is proven to be deeply systemic and of course a persecutor.”

The ministry said the teachers’ paintings created “a sore impression” and have caused great upset among pupils, parents, and public opinion.

Since this concerns a school head teacher, the ministry said, a disciplinary probe has been launched.

The artist defended his work as his expression of his artistic creation and said he had depicted Jesus as a simple man, a football fan, a refugee.

Morgan urges England to learn from series defeat against Australia