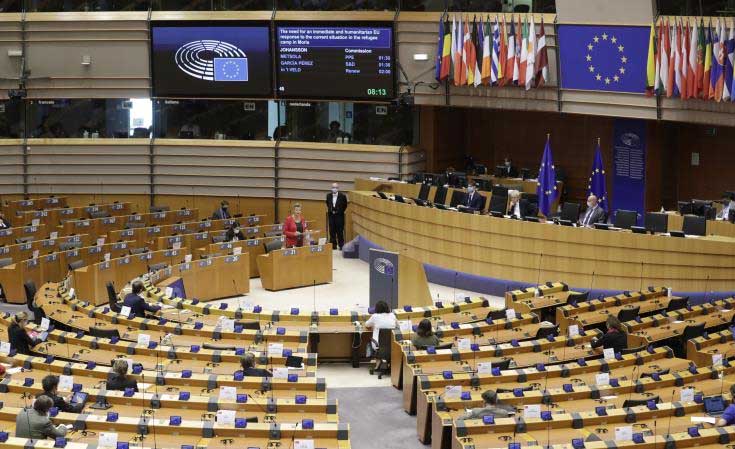 In a resolution ahead of next week’s EU summit that will focus on Turkey’s actions in the eastern Mediterranean, the European Parliament on Thursday condemned Ankara’s illegal activities on the continental shelf and EEZ of Greece and Cyprus.

Adopted with 601 votes in favour, 57 against and 36 abstentions, the resolution welcomed Turkey’s September 12 decision to withdraw the Oruç Reis seismographic vessel and urged it to show restraint and contribute to the initiative.

Furthtermore it called on Turkey to respect the territorial integrity and all its neighbours, immediately ending all further illegal exploration and drilling in the Eastern Mediterranean and insisted that further sanctions can be avoided only through dialogue, genuine cooperation and tangible progress.

The Council should be ready to draw up a list of further restrictive measures in the absence of significant progress on cooperation with Turkey, the EP noted.

MEPs urged all stakeholders to actively support the negotiations for a fair, comprehensive and sustainable settlement of the Cyprus problem, urged a full environmental risk assessment for all drilling activities, reiterated its call on the Turkish government to sign and ratify the UN Convention on the Law of the Sea (Unclos) and recalled that although Turkey is not a party, customary law provides for EEZs even for uninhabited islands.

The resolution welcomed the call made by the governments of Cyprus and Greece for good faith negotiations on the subject and urged the parties to submit their disputes to the International Court of Justice (ICJ) in The Hague or to resort to international arbitration in the event that a settlement is not possible through mediation.

It welcomed efforts made by the EU, most notably by Vice-President/ High Representative Josep Borrell and the German Presidency of the Council of the European Union, and other international institutions such as NATO, to contribute to finding a solution through dialogue and diplomacy.

MEPs also expressed serious concerns about the current state of EU-Turkey relations, mainly regarding the dire human rights situation in Turkey and the erosion of democracy and the rule of law.

Ankara has on several occasions sent its seismic research vessel Barbaros to Cyprus’ EEZ, and more recently its two drill ships, Fatih and Yavuz, to conduct unauthorised drilling activities of hydrocarbons, at times in areas licensed by Cyprus to international energy companies.

The European Council has reaffirmed its full solidarity with Cyprus, regarding the respect of its sovereignty and sovereign rights in accordance with international law and in February 2020, placed two persons under restrictive measures, in relation to Turkey`s unauthorised drilling activities in the Eastern Mediterranean.