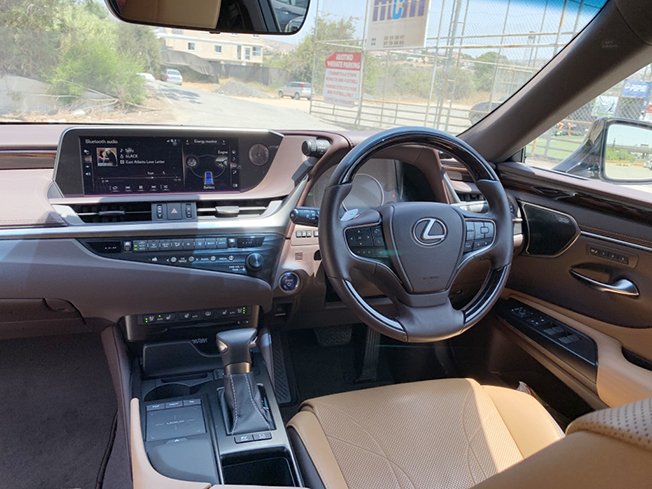 The interior is really impressive, especially in this lovely brown-on-beige leather combination

The luxury saloon segment is arguably one of the most competitive markets in the automotive industry.
Think E class vs 5 series, think Audi A8 vs S class. Saloons, or sedans as they like to call them in the States, have, across various sizes and price points, been host to some of the most crucial rivalries in the car world.

Purchasing a luxury sedan, it’s easy to get sucked into one of the big three German brands (Audi, Mercedes and BMW), that have historically dominated this segment across markets internationally. This week, to find out if this single-nation monopoly has any real challengers, I drove a 2019 Lexus ES300h.

When in the market for a car of this type, buyers often benefit from impartiality. What I mean by this, is that such cars are rarely yearned for. You may buy a Porsche because you have always dreamed of it, or a G class because of its unexplainable brutish charm, but the average person does not dream of a mid-size, mid-priced luxury saloon. It is a more rational purchase, and for that very reason a comprehensive comparison against the various models in this category is crucial. By no means am I refuting the possibility that there are accountants or aspiring taxi drivers out there who dream of a Mercedes E class, likewise there are those whose brand loyalty leaves them no room to consider other options, but for the overwhelming majority of prospective buyers, this is not an emotional purchase.

The ES300h sits in-between the smaller IS and larger LS models in the Lexus saloon line-up, making it an E class competitor. The first thing you notice approaching this car, is that Lexus have smashed it out of the park with the styling. While the Audi A6 is reserved in its appearance and the facelifted E class seems a devolutionary step in design from its predecessor, the Lexus stands out from the crowd. I initially confused it for the larger LS model (a car which costs about €100,000) due it its surprising-for-class grandeur, and the styling and finish are really modern. The tidy side profile draws attention to the car’s opulent length, and the complex but sharp looking headlights taper into a grill that somehow manages to look elegant in spite of its remarkable size. It is quite surprising that the ES300h actually starts at just €45,200 here in Cyprus.

In fact, I can’t help but think the mysterious nature of Lexus’ model range is a compelling advantage. You see, the price differentials between the signature saloons from the respective German companies create a sense of hierarchy within the line-up. This system is engineered by the manufacturers to push customers towards the more expensive, higher-margin models, and I would say a large majority of people understand that there are different ‘levels’ to the German saloons. The Lexus ES300h, partly due to its eloquent styling and partly due to Lexus’ less well-known line-up, is difficult to pigeonhole. Ask a random bystander how much they think the ES300h costs, and you’ll get a wide range of answers. Its stealthy, and that’s cool.
Inside, things are hugely impressive for the price point. This particular example is the ‘luxury’ edition of the car, and cost its owner €59,600 – a large but contextually reasonable price for a car in this segment. In the back, you get lovely leather side seats with a middle seat that can be lowered to become a luxurious, multi-functional arm rest – the result resembling a sort of ‘mini-limo’ rear section. You get ambient lighting, powerful ventilated seats so you can arrive places looking fresh on even the hottest summer days and a great sounding Mark Levinson sound system. It must be said, the ventilated seats can be a bit noisy, but if you like loud music then the sound system will resolve things quickly. The build quality is exactly what you’d expect from Toyota’s luxury sub-brand – near perfect, and the materials feel solid to the touch. The cabin is comfy and the centre console flows seamlessly up to the sharp looking touch screen, resulting in a really cosy, cocoon-like effect. This is a car that I wouldn’t mind spending a lot of time in.

The powertrain is hybrid, and it’s an interesting one. It is not a plug-in hybrid (PHEV), so charging is handled by the engine and regeneration when slowing down, and consequentially it doesn’t have much of an all-electric range. Rather, the electric motor works seamlessly in tandem with a 2.5 litre petrol engine to provide 215hp through the front wheels.

The engine is unconventional in today’s day and age in that it does not have a turbocharger, with Lexus using the electric motor and clever CVT transmission to play some fantastically Japanese tricks and provide torque on demand. There is a graphic available on the dashboard that shows you what is being used and when, but I found the powertrain so well integrated that I wasn’t that interested. You press the throttle and the computer sorts everything itself, providing smooth power and yet impressive efficiency – the owner managing a real-life long tem figure of 6l/100km. What’s more, while many European brands began experimenting with hybrid technology within the last six years, Lexus have been in the game for well over a decade, meaning you’re buying from a company with a proven reliability record.

Of course, the ES300h isn’t perfect. The radar guided cruise control can be temperamental – not a desirable quality from a system that you need to be able to trust, and the brake pedal has an inconsistent feel. This is because of the regeneration that’s taking place, so there is some consolation in the fact that something innovative is happening, but I have driven other hybrids that do it better.

Also, I know I am being picky, but the trackpad for the infotainment system is super annoying. What happened to conventional nobs and buttons? We are rightly told that phones are extremely dangerous to use while driving, and yet manufacturers seem to be coming up with increasingly fidgety and distracting ways of having you operate their infotainment systems. This is not a trend unique to Lexus, but like public renditions of Fortnight dances, it is a trend that needs to end soon.

So, does the Lexus do enough to distract your eye from the mighty Germans? Maybe. See, while some might be drawn by the brand-power advantage that an equally fully loaded BMW 530e would pack, that car is also considerably more expensive. It starts at €54,600, and after dressing it up in fancy paint and equipping it like-for-like the Lexus, you’re easily looking at €15,000 in options.

For under €60,000, the ES300h is about as luxurious a car as you can get off the showroom floor. For me, it hits a luxury-to-value sweet-spot that puts it right on par with anything else in this sector. It is cosy, economical, easy to drive and all the while interesting enough to still be a conversation starter. It is a car I wouldn’t mind sitting in traffic in, and considering my stationing in Limassol, that is saying a lot.