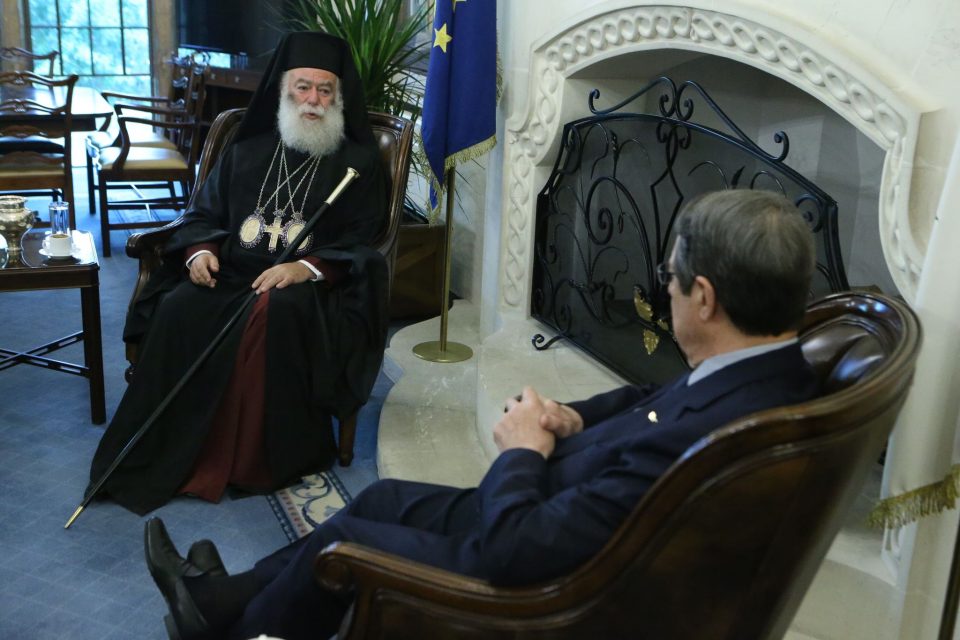 The meeting at the presidential palace (Christos Theodorides)

The coronavirus pandemic will slowly go away and it will soon be just a memory, Patriarch Theodore II of Alexandria said on Thursday after a meeting with President Nicos Anastasiades.

“Life goes on, so we must all muster our strength and courage to keep fighting this battle,” the Patriarch, the current Eastern Orthodox Patriarch of Alexandria and all Africa, added.

He said he is in constant communication with Egyptian president Abdel Fattah Al-Sisi as well as with other Archbishops in Africa regarding the pandemic.

“We have a big problem on the continent, especially in South Africa where there are thousands of dead. Our Church is always close to people in need,” he said.

After the meeting, the Patriarch thanked Cyprus and referred extensively to the work done by the Patriarchate in the island throughout the African continent.

In addition to meeting Anastasiades, he also met Archbishop of Cyprus Chrysostomos II.

“Tomorrow, I am returning to my Patriarchate full of love for the Greek Cypriot people, which will help me continue my work in 54 countries in Africa,” he said.

Referring to the work of the Patriarchate, he said that, among others, two 2,000 schools and 3,500 medical centres will be opened in Africa soon.

He further added that he will soon leave for new missions in Africa.

“I was in Mozambique in February. We housed 300 babies who were found in the ocean after the big tsunami.

“Then I went to Zambia, on the Zambezi River, where we set up a school for orphans in a village in need,” he said.

Theodore added that the decision to open Cypriot embassys in Ethiopia and Kenya are proof of the island’s willingness to help the African continent.

He finally thanked the Leventis Foundation, which, as he said, helped restore 50,000 ancient manuscripts in Alexandria.

Positive first round for Tziortzis in Nascar Whelen Euro Series